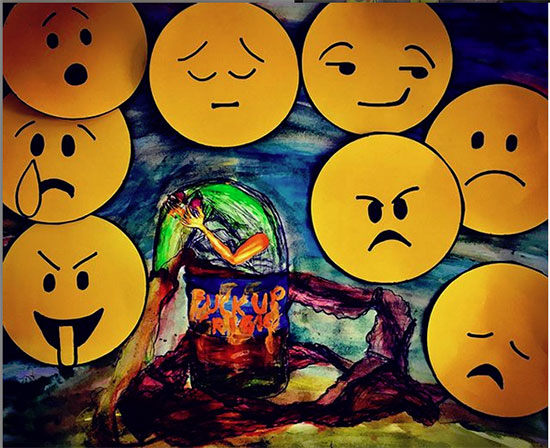 Attended by strange angels in white,
We see the glow is not of wing, but of lab coat,
As they stoop to study, the astral asserts
Across paradise. As the aliens prise open our heads
We glimpse the founding myth of religion;
Which is simply a naieve journalism
Beyond which the true story seals and deceives
Through disguise.
We are their globs under glass,
Or what passes for glass in their cosmos;
A mistake to be charted, disseminated, then cured.
What we see as God is not God, but a Tutor perhaps,
Or Instructor, guiding the knives slipped within us,
Dealt by focusing some star burn’s comet force.
Our ‘Angels’ are projection; no more, patient faces placed
Over their ones, whose flesh moves as water,
Or whose expressions no doubt, stem from sound;
For our surrounding fictions save us from the truth
Of exposure; as we stain space, our sad corner
Is an angle that they can’t allow. And so they intervened.
The Egyptian Hieroglyphs had it: those stylised figures
Were not cartooned, just to scale. They achieved
Bright new forms and designed the tombs for all people;
Misunderstood, these grave mountains were erected
To prize each Pharoah. The alien forces felt shunned
In the delivery of their message. Their death innuendo
Was a sophistication too far for mankind.
And so they left us to rot, and rot occurs aeons.
The Pyramids became arrows, pointing towards
A lost overthrow. After Atlantis, and Greece,
After the Eqyptians and Romans, Von Daniken’s
Starred graffiti was there to detail each attempt.
How many times on one slate can you clean away
The excesses? How many times can you tell them,
And just to what wronged extent? If the vanquished
Rise up, that alone, does not make them worthy;
Circumstance, act and context are what define that value.
The survival of man despite the blights first delivered,
In no way excuses the state of his and her decline.
That’s truth’s glue. And God is an alien, let’s be clear,
And does not live on our planet. God is a resident,
Or a landlord in locations beyond where we are.
Infuriated, at last,‘God’s’ agents were sent to destroy us;
One by one, these assassin hitchhikers, rode on nuclear light,
Comet, star, to stain the walls and stories we have,
From the scratch on the cave, via Bible tale,
Through to Sci-Fi, from Bayeaux Tapestry to TV screen,
Each experiment found its title without each subject struck
Knowing why. The abductions began. As did the scribes
In their writing; from madman disbelieved in the village,
To Bradbury, Aldiss, Dick. Authors who each sermonised
For some of the truths we’ve avoided, using spectacular fiction
As cover for all manner reports coming in, a la Strick.
Communions. The Third Kind. Each a fairy tale, almost,
But as with Hamelin’s Piper, or the Witch in the woods,
Darkness robes;
Seen through dying eyes,
As they carved, we were still brain cleansed to see angels,
And yet each abduction once finished is a gospel of sorts
For the probed. But each was merely space peering in,
And the force behind all known being, and behind
Unknown being,  which was there to make us feel
More alone. God gave up long ago. The Atlantis wave,
A third flooding. When it rains, God spits on us,
Aiming attack through the drops. And yet the alien angels
Persist, but rarely seal the wounds they’ve been peeling,
It is through these splits, truth’s last feeling
Will haemorrhage, waste and clot.
Wracked, we walk on, with the experiments lost
Within shimmer. A wing folds, then a tendril.
There is a ripple in the real.
The wind stops.
.

View all posts by David →
This entry was posted on 7 March, 2020 in homepage and tagged David Erdos, Georgina Baillie. Bookmark the permalink.