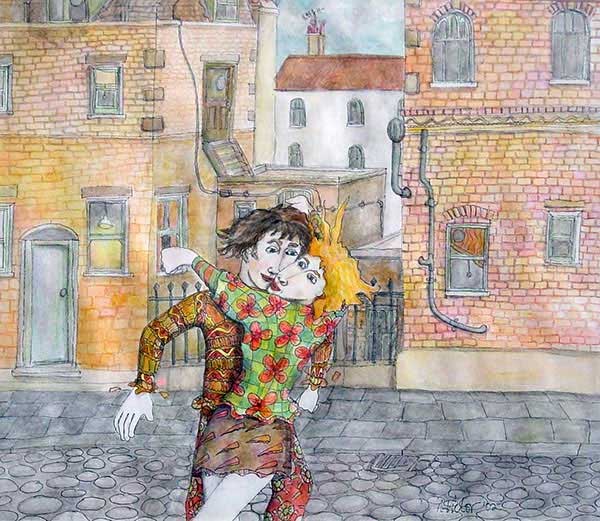 In the middle of the journey of life I hear a faint call. Is it just minor chance like a leaf falling from a tree, a plastic bag billowing in the breeze, or an invitation, a call to adventure? Although uncertain we – a small group of friends –  gather for the journey, and begin. There is silence in heaven about half an hour. Then the ceiling begins to pulse and flutter, lights playing on a canvas billowing gently in the wind. We move from the familiar. Reality drops its formal robes, softening and signalling a change.

This sign awakes in us the realization that the universe is an enormous paradox, everything is full of meaning yet meaningless. Nothing matters yet matters everything. Our existence and the world is only the accidental side effect of non-existence. The ultimate cosmic joke, and the most serious truth about the universe ever, at the same time. Cracking up, we roll in laughter until our sides ache. We laugh and look at each others’ merry faces running with tears knowing we are sharing the funniest joke ever. Crossing the flood of laughter we come to Appearance. All we see squirms with undulating lines, designs and hues. Clock face figures wander around the dial like insects. Cracked walls stretch and shift, lines meandering and rippling like the surface of a pool. We are drawn by a shifting display of beauty –  totally enthralling. My face in the mirror pulses and flexes, cracks and pits appearing and disappearing, colours and textures coming and going. It turns into a caricature that verges on the disquieting and threatening until I look away. Away. Out.

We wander through the chartered streets together and see signs of change. Walls aglow and buzzing with shifting designs, weaving, changing ceaselessly. Winking faces with smiles and teeth appear then sink back into the jungle surfaces then hands, animals and complex patterns that hold our gaze in wonderment. The city landscape lives, breathes, a pulsing seething motley of shapes and creatures.

The world of spirits appears; bodies, faces and eyes of angels and demons drift in and out of existence but hang on the lintel separating this world from the next. Glowing eyes and bodies though invisible, have tell-tale auras of being we can sense. Powerful creatures, malevolent, wrathful deities glowing eerily behind the seen, peer into my world. Reason tells me these do not exist, they cannot be, for they prove the existence of their master – God. Yet they are present to my senses. They are there, they do exist. Truth is tested and challenged and appears as a mobile army of metaphors, metonyms, anthropomorphisms that cannot mirror reality or even own its copyright. Certainties waver, blink, and try to blot out the otherness shining through from behind.

Familiar objects cigarettes, paper money, tickets shift uneasily, their meanings peel away like old wall-paper. They are revealed as fictions held in place by upwelling warm air – but once the meaning currents, the mutual consents that authorise them slow down or cease they flutter to the ground as tattered waste. Ragged dead butterflies. Conventional meaning droops and the emptiness behind all that signifies is revealed, both a joke and a revelation. Only the humming existence of the universe alive – alongside the reality of our immediate experience –  can be taken for granted.

At last we come face-to-face with our selves. I look within mine and find it familiar but strange. I am underwater with the medium visible but peculiarly alien. I am in my room but the view out of the windows has changed. I see vivid organically shifting scenes of colour, pattern, confusion and clarity. The sensation of being me is unfamiliar, the greatest strangeness of all. My background sensations of familiarity, the thoughts, feelings, perceptions that stream through my room are different, but so is my ego, I, the agentic self that experiences them. The subject that experiences, the base I, is other. The familiar is unfamiliar and my I and me that underpin all recognition only partly identifies itself.  I ≠ I.

We look at each other with wonder and care knowing each is a stranger in his own land, her own room, our own self. The same but different.

One time or two my perceiving I, my internal seeing eye, floods with a golden light, a warming penetrating glow and luminosity. Exceeding the sun this is the light of love, of god, of oneness with all that exists. Boundless compassion flows from my golden egoless I – which feels, cares, and is at one with all living beings. In that moment, even if just in microcosm, I know how god feels. Infinite knowing, compassion and love; and sorrow at the illusions and trapped behaviours of the ant like creatures all around me bearing marks of weakness, marks of woe. A ragged woman sits on a midnight door step in Whitechapel with a bag on each side. The left is full of tangled, knotted string. Laboriously she undoes the knots and puts the balls of string in the right hand bag. Is this our life, all life?

Retreading our steps we listen to familiar music. The horizontals of the music parallel our path, but many levels hang alongside in the air. Not only harmonics shadowing the soaring motifs, riffs and voices, but also the words. Their meanings walk with arms linked – surface meaning holding connotations and wild associations on one side and deeper meaning on the other. The tale told has mythic proportions showing the archetypal encounters, conflicts and resolutions of humankind, opening deeper truths to our gaze.

Back at our starting point we are joyous but tired and silent. The magic spell that has transformed the world and our band, slowly falls away. We are back in our everyday world, no longer heroic explorers of the unknown. But after what we have seen and felt the world and indeed ourselves will never be the same. The idols of perception, truth, beauty, reality, god, life and self are shaken. Not torn down but revealed as tentative, partial, becoming, compared to the ever deeper realities behind them.

And fifty years on those visions and truths remain with us the travellers. The world, daily life, our experiences are no longer taken for granted, read at face value. Behind all being the pregnant teeming void holds the eternally unknowable realities that recede, one behind the other, to infinity. Once we have peeped over the shoulders of the idols the world is never the same, but more richly interconnected, full of hidden meaning, just waiting for our deeper gaze to reveal it and to evoke our deeper compassion.

And our compassion illuminates the bruised and soiled world that cries softly for our attention. The bountiful world of the living recoils as we slash and burn the earth. The myriad points of light over all the globe –  the souls of our brothers sisters, fathers, mothers and children – flicker as their souls are trampled into the dirt. This is me and you are that too.

Tweet
This entry was posted on 13 June, 2018 in homepage and tagged nick victor, Paul Ernest. Bookmark the permalink.

One Response to The journey