THE KING OF THE STREET 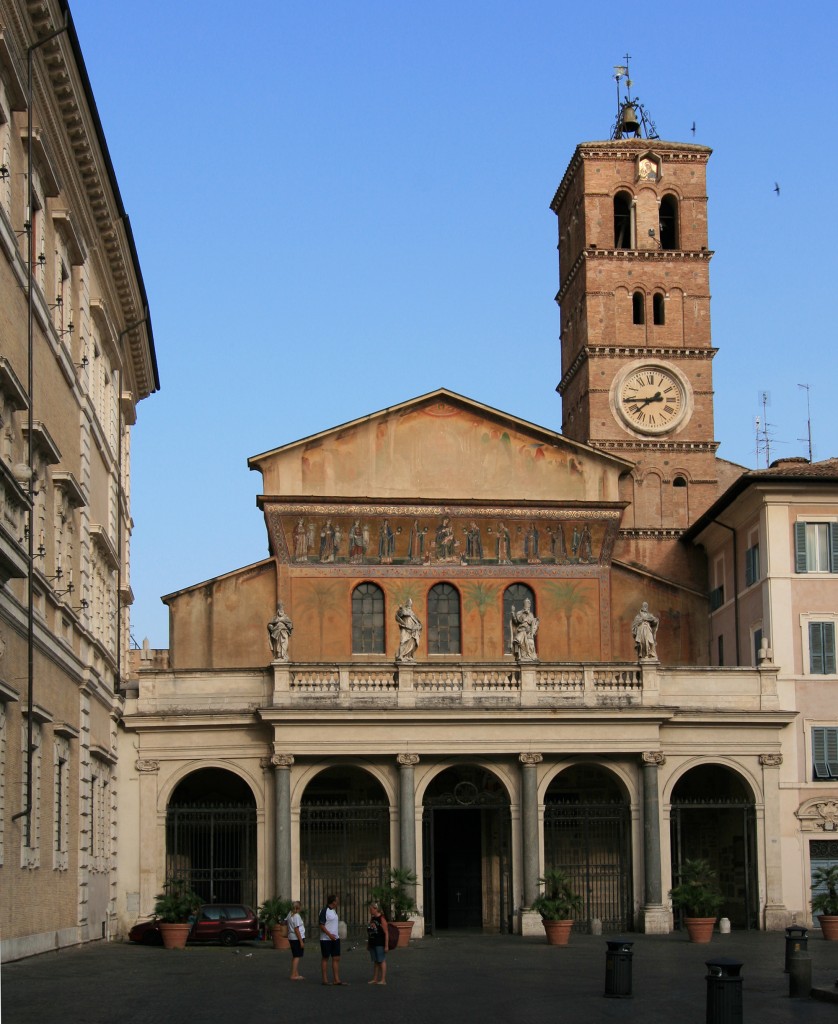 He was an English vagabond whose name was John.

I’d seen him sauntering through the winding, narrow cobbled streets of Trastevere for all the years I’d lived in that quarter of Rome. 32 years, 1978 to 2010. Sometimes he disappeared for a whole season and I wondered where he got to and would he ever come back? He always came back.

When I first came across him he was a tall, strong man in his late twenties, I supposed. He had piercing hazel eyes, an uncombed mop of brown hair, and not bad looking, although dishevelled given his life-style. From my third-floor window I would watch him energetically drag a cart topped with rags to the rag-and-bone man, or iron to the iron-monger down my street, who would give him a few coins for his wares. He also collected discarded magazines and books, and I’d hear him mutter in voice loud enough to be heard by all: “Books are for reading not for throwing away,” over and over again on his way to another customer.

A gregarious man he could often be found lounging on the chipped marble steps of the 16th century fountain of Santa Maria in Trastevere. He’d get to see a sea of people strolling by or taking the sun on the steps, and engaged some in conversation. His Italian was severely flawed, but he could make himself understood. He liked to flirt with the women who stopped to chat with him.

In years he became known as the king of the street people, and was well liked by the clergy and staff connected to the medieval Basilica of Santa Maria in Trastevere.

The church has a long tradition for charitable work, and the Christmas lunch in the shadowed basilica’s nave, where incense scents the air, and the cornucopia of festive foods is set on folding wood tables placed on the Cosmati marble floor under 13th century gilded mosaics of saints, cherubs and doves, is a well attended ritual by the many ragged, desperate, maimed and lost. Clustered together they compose a living work of art that mirrors a Baroque painting. As steaming plastic plates piled with pasta topped with garlicky sweet tomato sauce were passed around, Giovanni, as he was known, presided over these banquets as  master of ceremonies.

There would even be an occasional piece about him in a Rome newspaper, defining him as the head of the homeless and telling some small story about him.  For days afterwards, he’d proudly show everyone the article.

In time his back became a little curved and his step less light as he dragged his cart of wares to sell. But eventually the ironmonger, rag-and-bone-man and others like them disappeared to make way for upmarket restaurants and a plethora of bars advertising Happy Hour drinks in tall glasses topped with little Chinese paper umbrellas, and Giovanni lost their custom.

Seasons slipped by. He now had a gray beard, his brown winter coat was in tatters, the navy-blue wool cap he wore when the weather turned cold, covered a mop of salt-and-pepper hair. But always he was cheerful, and, indisputably, still the sovereign of the streets. I didn’t know where his small change came from. He never begged.

The last time I saw him was on the night of the full moon in April of 2010. He was sitting on the steps of Santa Maria della Luce, a church in Via della Lungaretta. The cobbled street which leads from the main drag (Viale di Trastevere) to piazza Santa Maria, is normally buzzing in the evening, and on this balmy night was crowded with loud Romans, curious tourists, rampaging youths and the ubiquitous gypsies and derelicts: bums, vagrants, beggars on crutches, winos sucking at plastic cups filled with cheap liquor, swaying emaciated junkies with their cluster of dogs. Mingling with the cacophony of human voices screeching bats whizzed overhead.

Giovanni looked eerie and far away in his private world, and hardly his usual jovial self. I’d never seen him in this mood, or state. His hefty calves were bandaged below the dingy khaki trousers he’d pulled over his meaty knees, and infected boils and sores showed over the gauze. He was staring intensely at the huge moon, his eyes were aglow with the fire of insanity. Where will he sleep tonight, I wondered? In a dilapidated sleeping-bag placed on cartons under the awnings of some supermarket, as so many of the street people do, or in a crowded dormitory the Caritas charity offered?

Shortly after this encounter I left Rome.

It was a chilly, grey evening at the end of October of 2011. I was on the 91 going home after a guitar lesson at City Lit. The atmosphere on the half-full London bus was tranquil, but then at the next stop a visible shift took place amongst the passenger as an overpowering plume of an odious pong wafted through the air. A pulse of agitated movement shivered through the travellers. People looked up from their mobiles, The Evening Standard, their babies in push-chairs, their reveries and meditations.

Enveloped in his mall-odour, a heavily set, grey bearded hobo, wearing a navy-blue wool cap over his white hair, and wrapped in an ill-fitting sheep-skin jacket, carrying a stained canvas sack that overflowed with stuff stuffed in plastic bags, limped slowly past me, and sat down next to the woman in back of me. She quickly got up and took another seat at the rear-end of the bus. It can’t be, I said to myself, and turned around too look at him again. I must be hallucinating, I thought, but then asked: “Are you John from Rome?”

“I’m Giovanni, from Trastevere,” he replied, and I got up to sit next to him.

“What are you doing here?”  I asked, astounded. He had to leave, he said.

“I lost all my friends in Rome,” was as much information as I could get from him. He said he didn’t want to talk about it as it was too painful.

For some years now, Alemanno, Rome’s fascist mayor, had been cleaning the streets and piazzas of the street people. Police swooped down on them, asked to see identity papers and shifted them back to wherever they came from. I suspected Giovanni had finally been given his marching orders by the Italian authorities also, and shipped back to his native England. 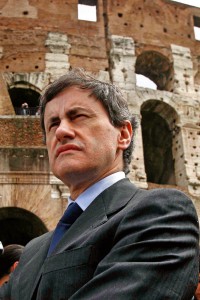 He hates London, he said. “You can just die here and no one cares. When my mummy and daddy died they couldn’t have cared less. I was shocked to see how cold and nasty people can be. That’s when I moved to Rome. The people there are warm.”

What kind of mommy and daddy did this man have? What kind of childhood? What brought him to the streets? I can only guess.

With bitter expression on his timeworn face, he continued telling me how awful it was for him to be in London. “If I don’t die soon I’ll kill myself.” A man who had basked in the Rome sunshine now looked as gray as the London weather.

“In a prison,” he said with scorn. Which probably means one of those desperate hostels for desperate people like him. I’d heard it’s a hell on earth.

“See you in heaven next time we meet,” he said as I got off the bus.

Should I have invited him to my home? Had him take a shower? Fed him? I couldn’t do this; I wasn’t strong enough to take on the mammoth task of befriending him.

I didn’t know what to make of this startling encounter, and later that evening consulted the I Ching: “What is the significance of my bumping into Giovanni?”

The waters of the earth flow together wherever they can, as for example in the ocean, where all the rivers come.

Giovanni, I think, must be the vagrant in me.

Two weeks later, two stops later Giovanni got on the bus again. This time he recognised me. “I met you the last time, didn’t I?” He sat down next to me; I tried to handle the stench. The young guy who was standing near me moved off. We chatted, again he told me how much he hates it here, how uncaring people are. I told him I’d met with nothing but kindness when I arrived from Rome penniless and got housed by the Islington Council in short time. “That’s because you’re a foreigner,” he said, and he might have a point, although I do have an English passport so basically I’m not a foreigner.

Not that John could have been housed – he lacks the skills it takes to handle living in one’s own home.

He grumbled about the state of things. “We have become American,” he said disparagingly. He complained about the government and the Royal Family. “What good do they do? Do you know how rich they are?”

“In Rome they have the rich Vatican,” I said.

“Don’t confuse the two, the Vatican is about spirituality, the Royal family is just about making money. What do they do for the people?” He might have another point, I thought, and was glad when the bus reached my stop.

On my way home from a visit to the British Museum I stopped to have a coffee on the terrace of the cafeteria in Russell Square Park. Spring sun-rays spilled over the leafy tops of towering plane trees, flower-beds, shrubs, happy dogs, nervous pigeons and an eclectic array of people sitting on wood benches around the fountain or sprawled on the green lawns in this oasis of tranquillity. I felt grateful that I was blessed to be a part of this miniature Elysium. Then I made my way to the nearest bus stop, and who did I see sitting there?  Giovanni! I did not want to stop and have another conversation with him; I did not want to hear his unhappy and bitter story again. I didn’t feel that there was anything I could do for him, so I walked to the next stop, got on the next 91 and was relieved he was not on it.

The next time I saw him was from the bus’ window. He was sitting on his own at a pavement café in Kingsway; his canvas sack and other plastic bags at his side.

And then some ten days later, again from the bus’ window, I saw him sitting at an outdoor café near Euston Station, talking to a homeless friend.

I was pleased to see he was in company. He was, after all, a gregarious chap.

On a cold afternoon of February 2013 I saw Giovanni near the Angel Underground. What to say?

I am aware that only a thin line separates Giovanni and me, and that there, but for the grace of God, go I.

Tweet
This entry was posted on 23 May, 2013 in homepage and tagged down and out in Rome and London, Hanja Kochansky, the fascist mayor of Rome, The King of the Street. Bookmark the permalink.