The Prince of Amsterdam 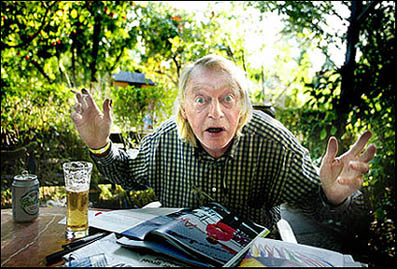 Hans Plomp has just told me
That he dreamt of Simon Vinkenoog,
And in his dream Simon, now long dead, said,
“Hans, it’s a party in Heaven.
I’m here with kindred spirits only.
It’s like Earth, without all the shit….”
“I hope so, Simon”, Hans had replied.

Simon was the poet-Prince of Amsterdam
And a great joker.
When I was with him once I made the mistake
Of saying, on an idle whim, that I’d like to learn Dutch
And Simon instantly said that he’d teach me.

I was all ears: Simon said if I wanted to ensure
Prompt and attentive service
Upon entering any Dutch shop
That this was a useful opening remark to make,
‘Ik heb pindakaas op mijn lul’
He assured me I’d find the sentence invaluable.

He rehearsed me and he made sure
I had all the right inflexions and the glottal stops
Of Holland’s gutteral phlegm language,
That smacks of raw herring and of Rembrandt.

When I saw that Simon was hovering round the corner
As I entered the tobacconist on the Leisdesplein
To put my first stab at conversational Dutch into practice;
And when I saw that he was holding his hand over his mouth
And repressing a huge buck-toothed giggle,
I suspected that he was putting me on
But I went along with it all the same.

The earthbound Dutchman was at first bemused,
Then, when he realized that he’d heard
What he’d thought he’d heard,
He transfixed me with cold, cod-like eyes.

It seemed my first outing in Dutch had consisted
Of what he considered an inappropriate invitation:
“I have got peanut butter on my dick.’

I secretly knew that that’s what it had meant
Or something very like it. Or worse. It was worse.
I took to my heels. To be greeted by gales of laughter
From Simon, standing with his hands on his hips
And rocking like a mad metronome
Set to its maximum speed,
And with his beetroot-coloured face
Apoplectic with pleasure.

The world remembers Simon Vinkenoog
From the great happening at the Albert Hall,
‘Wholly Communion’
The International Poetry Incarnation
Where Ferlinghetti declared
That the proper object for man’s worship
Was the Sun, as “the Sun still rules everything”
Endorsed by Allen Ginsberg who thanked the Sun
For “making my whole body visible
Through my own eyes”
And where Adrian Mitchell declared
A peace war on the American Government
For telling him lies about Vietnam;
And where Ferlinghetti announced that
He was “waiting for Aphrodite
To grow live arms at a final
Disarmament conference.”
And where a seminal sixties moment took place
When Simon Vinkenoog leapt onto the stage
To forestall a riot: the whole audience
Had suddenly been screaming in feverish frustration
As a hapless poet’s encyclopedic dirge
About his LSD trip went on, and on, and on,
With the Master of Ceremonies, Alex Trocchi,
Trying every which way to get the poet off the stage
But nothing worked and the audience booed louder still
And jeered and barracked and shouted
As the unstoppable performer insisted on finishing
His unending marathon about seeing spiders on acid,
Whose laboriously intricate minutiae threatened to sink
All visionary poetry forever.

The audience’s brutal cries of ‘Boring! and ‘Fuck off!
And ‘That’s not poetry!’ and ‘Get orrrrff!’
Grew to a cruel crescendo.

Then Simon suddenly shot out of the audience,
A berserk windmill
Flailing his arms, possessed by the spirit of the age.
“Lerfff!!” he chanted, “Lerrffff!”
Hard to make out what he was saying at first.
But then it was clear that he was chanting “LOVE!”
And then singing “LOVE!” and shouting out “LOVE!”
And then he lowered his voice dramatically
To stage whisper “LOVE!”
And it was, “LOVE! LOVE! LOVE!”
Over and over again.

And the barracking audience fell quiet and was shamed into silence
As the word echoed round the giant Victorian
Mammary gland of petrified red and yellow stone,
And then some audience members joined in,
In an undulating rippling echo of Simon’s
Magical monosyllabic missile fired into the auditorium,
And they too called out, “LOVE!”
And at last a prideful Harry Fainlight left the stage,
Albeit reluctantly, snarling at Simon
And calling him “a loveable idiot” as he left.
Yet Simon’s intervention had allowed Harry
To leave with his dignity in tact
And his head held high.

It was 1965 and a foretaste of the Summer of Love
When it was believed that love could stop war,
And at this wholly communion
Where a Bardic tap was unscrewed
And turned into a spiritual fire hydrant,
Simon’s conflict management
And his enchanted exhilaration –
Whereby an audience baying for blood could be quelled
By a single spontaneous word – showed what could be done
With love, for the Wholly Communion’s whole audience
Felt wholly good about what had happened.

On hearing about Simon in Hans Plomp’s dream
I believed in Simon’s running commentary
On his life in the afterlife
And I was transported there immediately.

I also recalled a poem
By this electric ecstatic
Of poetic positivity
And ultra-optimism,
“Fly away with an ego
You have nothing to lose but (woe betide you)
paradise on earth…
Promise yourself
to give so much time to the improvement of yourself
you have no time to criticize others.”

I can see Simon friskily prancing through space
On his one leg, the stoned Dutch unipod
From ‘Optimism International’,
“Hans, it’s a party in Heaven.
I’m here with kindred spirits only.
It’s like Earth, without all the shit….”
And I hope that it’s not a crazy Dutch joke,
Nor that I’m just being gullible again
Because, of course, you always want
Some people to go on forever and ever.
Eddie Woods tells me that Vinkenoog
Means the eye of a Finch in Dutch,
Which feels right for someone
Impulsively picking out the good things
In life and sharing them.

When Christopher Marlowe died
The poet Henry Petowe said that Marlowe
Had gone “to live with Beauty in Elysium”
Where he was singing songs to tunes by Orpheus,
Divine hymns, Petowe said, “to make heaven harmony”
(Quite a stretch since Marlowe was an atheist).

Michael Drayton added that Marlowe had in him,
“Those brave translunary things that the first poets had,
For that fine madness still he did retain
Which rightly should possess a Poet’s brain.”

Wherever Simon is in the mega-verse
He can’t have lost that fine madness –
An indispensable aptitude
For illuminating black holes with “LERRRFFF!”

One Response to The Prince of Amsterdam