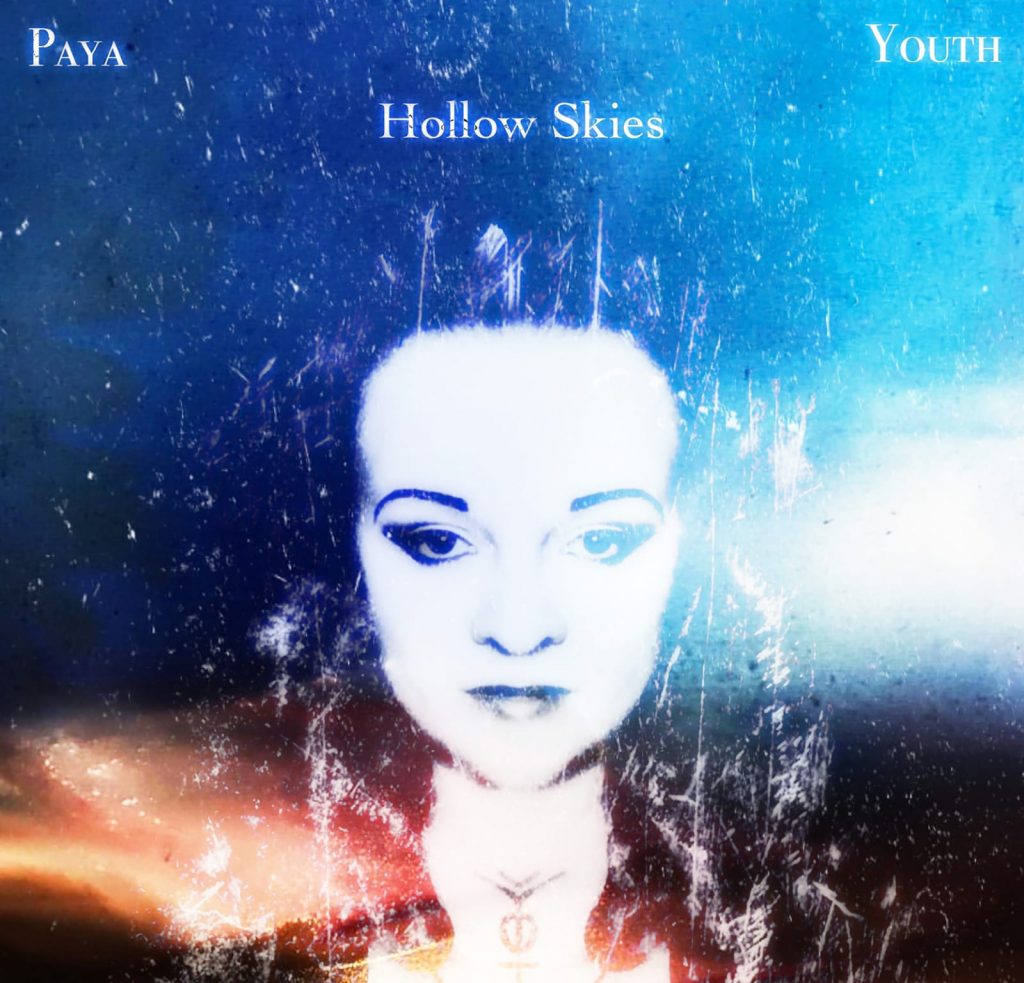 If the sky seems hollow, its loss now finds salvation as Paya Lehane fills the digital realm full of spirits, emerging to give beauty and a return to its source a full voice.  She does this with word sounds that suit the clothing shape and style of the music; a language that is both invented and abstract, with the sung phrase played like a colour, or, like a soothing of string, wave, and key. As Paya exquisitely requiems, she also eulogises, and opening song BLUE WIND seems to out Gerard Lisa Gerard, another astral tinged singer whose voice is that of a Goddess able to soothe and calm each heart’s choice.

The song brushes in like a wave colouring the sky as it claims us, borne by producer Youth’s synths and electronics like a climate of sound or cloud bank. This is song as mythology sent from beyond the sky for our broadcast and a means to make order from when the flood has formed and saved what ships sank. This song sounds like an actual means to survive as Lehane’s stunning voice comes to claim us. And it is that very air you might long for when the skies  for which you are searching, after fading fast regain shape. With a stately clatter of percussion and strings, and Lehane’s old celtic flute ecstatically rising, we can hear a call to arms also, as the vocals both warn and warm us of changes to come while still reviving some lost and deep sense of place. As an album opener, it astounds through its wordless manifesto, with Paya’s voice as life and light shifting across an aural picture of timeless and no doubt space.

MYSTCIA is a chant for both the ancient and modern. It rising tone Dead Can Dances in the summoning sound it creates. This is a soundscape carved from dreams and from a union with the magic whch is the stuff of life and the mistress of all that the dark contemplates. Stephan Honc’s guitars and Andrea Seki’s harp feature strongly, fanning these unfolding ghost fires and the spectral shapes they would chase. The song resolves, like a spell returned to the bottle, as its enchantment stays with us, like a light that’s grown and won’t cease.

WAS IT A DREAM? Builds on this as India and the East come together.  Paya’s vocals speak beyond language to the private exchange of the soul. A jew’s harp underlines Seki’s own starred Harp as lyre, while Jayetta Gosh joins Lehane in spectacular counterpoint.  Where there is yearning and calls to some higher power there is also peace, resolution and a place to give hope a voice. The womens’ vocals combine as the sweetened flute stitches, to create a tapestry that will cover and illustrate the narrative dreams unveil for us, transforming the present and our own imposed notions of what reality is and can be.

Over a moon graced piano and searing string line, title track HOLLOW SKY calls beyond the surrounding atmosphere to further forces. Paya’s voice becomes that of a female warrior calling to secret strengths and precious resources to perhaps cope and deal with an approaching crisis. There is a sense of resolve as she sings, repeated phrases and codes that rise and remind of Liz Fraser, as the Cocteau Twins reconfigure inside this particular sound family. It is a burst of power and pride which soon becomes a piece of near balletic perfection, as an oboe bursts the cloudbank and its answering sound calls to her. But then the soldier returns and we hear the strains of pure transformation, as the flight inside Paya’s voice sees us moving cinema like, filling sky. An almost knowing piano line now controls with both a calmness and power that resolves the reasons for confrontation, alongside the saving grace of all flight.

NEVER BE A FOOL with lyrics by Youth, captures love’s first encounter in which the woman instructs her neophyte lover into the sharp fire and the method and means of the heart. Here love is the drug and the high as the two come together, with the line ‘Never be a Fool/Unless you want me to be’ as the statement on not only the flesh’s devotion but also of the sacrifice it commands.  The beautifully played flute and harp and strings soar as this spume of scent rises and one can feel the coy moment before the evening craves love’s reward.

FALLING SUN is ghost flute and harp and the exotica of the forest, whether paraguayan, or Shakespeare’s, enchanted or dreamt, haunted, sung. The light is captured and drummed as subtle electronica tames it, conjured by Youth and Luke Fitzpatrick, as light is returned and becalmed and softly lead and lain on the ground. These are special sounds, unique strands that this beautiful music is weaving. The listener becomes one with this album, as Paya Lehane voices for you the spirit and beauty, and the sadness and sense of return we all seek.  One thinks of Gerard, and of the composer Jocelyn Pook also, as the sheer range of the tunes, themes and singing scales the far mountains and the interior terrain where hope sleeps.

DEEP MIND catches a low trombone sounding chord from which Paya’s voice rises. The slide of low synth that moves though it makes this song a small boat on dark seas. These oceans are mastered, mistressed and shaped by the structure within Lehane’s singing. She moves, masked by darkness as light crashes across her, as one can imagine the video of it, with splinters or shards on her face. She is coming closer it seems all the time and approaching the place we all look for, a sense of invocation and meeting, where there will in  time be a union between that to be mastered; a magical confrontation in which music will always be the first thing and then the last thing too that survives.

CALL OF THE WILD Zimmers in, like a soundtrack to becoming, as Paya lullabyes the slow metamorphosis of an unruly heart. The rhythms swoop and soar, like an intricate dance that keeps changing, as sound assumes language and tells us what to do instantly. From wise woman to girl experiencing all: sound as story, as the wildness of experience is filmed and projected into the hollowed out heart and primed ear.

The near hymnal WOLF MOON features ambient guitar maestro Steve Norris, and in a  moment transports the listening heart towards light. That such a light is moon cast and basks on a strange melancholy is to only enhance the enchantment of this slice of otherness captured and cast now before us. Paya’s voice is sublime here. Few other earthly sounds seem as pure. So if this is the wolf, bring on the hound and star creature, as this song becomes herald for the howling darkness that heals.

BROKEN WIRES concludes. But these aren’t the broken lines to connection. For these songs and sounds seem as perfect as any call to continue can be. From a stately intro, a burst of near pop song enchants us, until once more evolution as charmed by one woman’s throat is heard rising like the proverbial snake from the basket, or star that finds variation in the mirroring kiss of the sea. If the Sky was hollow before, then now it is filled by these soul graced songs from Youth and Paya. From her mouth, dreams find flavour. And under the skies sent to serve us we will as we listen glimpse, hear and decipher entirely new ways to be.

Produced by Youth, mastered by The Orb’s Michael Rendall at Meridian Studios, with label Manager and musical ecstacist, Renato Roversi as Executive Producer, and stunning artwork by Natalia Rodriguez Milanezi, this crucial piece of digital ascension is a key to becoming and the kind of muse all change seeks. The room around you will shift and the skies above sweeten. Free again, far from hollow, across these songs rest horizons, as if light itself was now singing in language and lines the soul speaks.