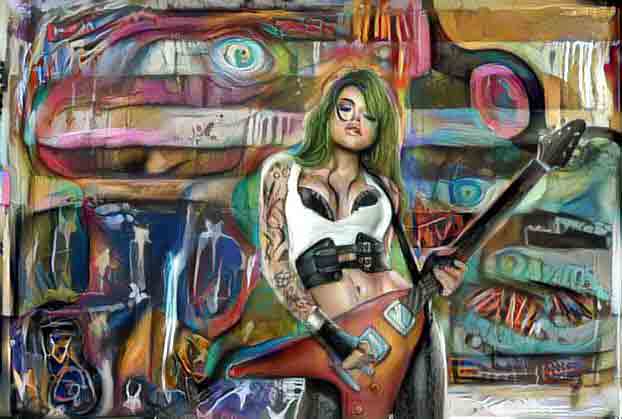 An extract from Smoke Show  by Saira Viola

Early morning : Parked outside Baby Blues in an unmarked gray Chrysler 300, still code 3 equipped. His white shirt unbuttoned, revealing a full pecan tinted rug.  Cuff  sleeves turned back. His black pants were unzipped, and his cock poked out of striped jockeys. Schneider had a sock missing and a solitary  long frizzy white hair dangled from his left nostril. Checking his face in the rear-view mirror , he yanked the hair  out. ‘Son of a bitch. You still got it.’ He ran the tips of his fingers down the right side of his face. A face, chequered with mistakes¸ money fights, and unreported  murder.

Schneider smoothed his  shirt down, zipped up, and rummaged around in the back seat. Sifting through paper coffee cups, potato chip packets, a half-drunk bottle of Jameson, and a dozen grease spotted Five Guys burger bags, he grabbed his deodorant  stick . Twist. Click. And slicked both armpits . Then he spied a little mouthful of sunlight. A sparkly -faced, pretty teen, Marla skipped  in front of him.

She flung off her denim jacket revealing a sea green neoprene boob tube underneath  and hiked up her lace skirt allowing the  youthful rush of summer heat, to embrace her as  she wheeled her hips around  . Her v cut  pink string tanga on show. High High High. Her smiling honkers on  display. Caterwauling, tuneless karaoke  style rhymes , she was all taste as she hop-scotched towards the  patrol car. Kool Aid  cup in her hand. Her apple shaped ass winking.  Jiggle Jiggle .Like the  soft round sound of a Tennor trombone .

He leant back in his seat, slid his hand down to his leg, and winced as he lifted the hem of his pants. A dime sized hole in the middle of his right calf dripped  blood. He blotted it dry  with a stained paper  towel and tossed it in the back seat. ‘Small fish are easy prey ‘, he muttered. ‘Pat and frisk. Every curve. Inside thigh and sugar  walls.’ He opened the car door using the Dutch Reach technique, so he could easily spot any on coming distractions, or potential witnesses. ‘Excuse me Miss.’

Marla was in her own kookookechoo bubble. A taupe suede boho hippie tassel purse hung from her neck. ‘Yeeeeh.’

‘Miss could you please step this way?’

‘You got no right to ask me anything . Not doing anything wrong. Lemme

‘You ain’t shit  baby . You ain’t nuthin and you ain’t going nowhere.’

Marla spat on the ground . ‘Bbbbbbastard!’

Without blinking, Schneider pinned her arms behind her back using his left hand to control her. Within seconds, she was cuffed. He forced her to stand, legs apart, against his car and placed his big meaty hands on her waist . After patting  her down, he groped her left butt cheek. ‘You got your ID?’

Then he groped her right butt cheek.

‘Cool it honey .You’re slurring your words, and there’s that crazy eye twitch. You

reek of weed and pcp. And you’re in a lot of trouble. It doesn’t look good for you.

Not at all. No mam. Thing is liddle lady, I’m ENTITLED to touch. Anywhere I want.

Cos, I got a feelin’ you’re concealin’. And your freaky -deaky necked shit  makes me

think you’re under the influence of a drug or controlled substance. But I’m a nice guy

I’m thinkin’ you and me can work somethin’ out.’

He caught the warmth of her body as he stood  behind her with his cock pressed hard  against her ass and slipped his fingers into the back of her panties. ‘You know what I want.’

Marla opened her mouth as  wide as she could her tonsils trying to spread the injustice.

‘One more word and I’ll fuck the shit right out of you.’

Marla tossed her  head back and mule -kicked him in the shin. He stumbled, picked  himself up and untied the purse from her neck.

‘Now what we got here? Some kind o’ prairie hippie  shit?’

Inside her purse, Marla had her driver’s license, cell phone, a tiny tube of Tahitian  sunrise lip tint an E B T card and some foil wraps. Schneider held the purse under his right arm and walked her to the car, placing her headfirst  into the front  passenger seat . He sat on the driver’s side and pretended  to run her  intel through his police laptop.

‘We got a real messy situation. Clearly, you’re  under the influence of some kinda

drug probably some alkhi – hol too. Completely outta of it in a public place. So,

you’re a danger to yourself and everyone around you.’ He held up the foil wraps.

‘And what we got here? Some leftovers? A little angel dust. Krissst.’ Schneider’s face

grew uglier.  ‘Girl you’re fucked! Well what’s it gonna be big Jim and the twins or a

trip to the precinct and county lock up? Get down girl. C’mon. Get down.’

‘I saw the EBT card . Dunno why they bother with that shit. You can’t buy vitamins,

hot food, beer,soap,cigarettes,liquor, or tobacco. So, what the fuck’s it good for? If

you  accept my offer, at least  you’ll be getting a dose of good ol’ American protein.

Just you and me . It’s a very generous offer.’

Marla clawed her own hands. A form of self-protest.

‘Wh..what kind of fucked up po po are you anyway?’

‘The real kind . Dirty. Reliable. Now we got a deal or what?’

Marla leant over. She dug her nail tips into her palms until they drew blood , as she pushed her  lips forward. Pastel ribbons of vomit  began to build in her glottis. Schneider   unzipped his pants.

‘Grab it with both hands. Stop it bobbing. Now give it a good long, slow suck

Marla noticed his 45 caliber Kimber  Classic pointed at her face the whole time. She felt as if her tongue was buried in white America  , as if she had no control of her own body. Terror. She wanted to run. Run from his blistered thumbs and his sickly cologne. But one look at his malign  little eyes and she hung on, feeding her wounds into his mouth. When it was over, she remained perfectly still for a while , staring at a  singing wave of blue sky. I always wanted to live up there with cotton candy fountains and pink jello unicorns

Schneider dropped her off at a vacant parking lot near Family Dollar. She sat on the curb and  threw up. A five minute  technicolor barfing  opera. All her dreams, missed opportunities, and nightmares splattered to the  ground.

Schneider adjusted his  pants and drove away, spanking the tarmac at speed. Pounding on the steering wheel, he screeched the lyrics to AC DC’s Highway to Hell: ‘No stop signs… no one’s gonna slow  me down.’In the cavities of his mind, Schneider believed he was a  renegade, reacting against a system he’d stopped  believing in long ago. To everyone who knew him  he was a snortin’  -stealin’-  dealin’-  crooked cop . The god of the unflushed

The Swoop by Saira Viola read and performed by David Erdos

Tweet
This entry was posted on 15 August, 2020 in homepage and tagged David Erdos, EnDo, Saira Viola. Bookmark the permalink.