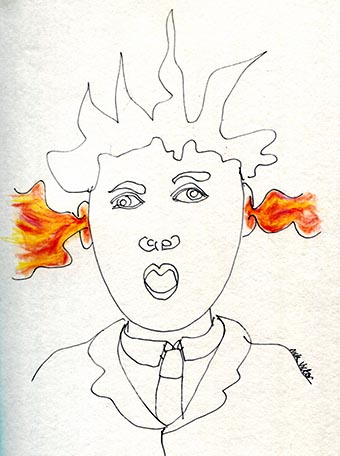 Smith, a nondescript man is in the middle of a long tirade; he is telling the Prime Minister exactly how to run the country. No one else is present in his room as he paces up and down giving forth eloquently to his views, and the PM himself of course, is entirely unaware of Smith’s existence, a pedantic fact which he regards as inconsequential.

‘Tell them they can run their cars for one year only, starting from now, while they adjust to alternative forms of transport and then no more of the infernal combustion engine.’

‘Forget economic growth and all that rubbish and get the motorways dug up,’ he orders. ‘Replace them with canals lined either side with solar panels ─ then bring back the horse and barge.’

The PM is beginning to wilt under this onslaught on all he holds dear; his own ideas, a mishmash of consensus views and defensive positions are being breached by Smith’s dreadnaught rhetoric.

‘Construct dirigible helium airships that can carry heavy loads and lower them wherever they are required. ─ And while you’re at it; put an end once and for all to commercial air-traffic and stop them scribbling like children scrawling in a picture-book – it spoils the look of the sky!’

It is at this point that he hears a small sound behind him; it is a slight creak rather like a door being opened surreptitiously. He turns around ─ it is a door opening ─ his door, and…

There, one hand still on the doorknob he stood; an old acquaintance P. B. Rivers: a ruthless existentialist. – He looks at Smith accusingly.

‘You were talking to yourself,’ he says sternly, as if he has caught Smith secretly eating cream-buns or some other such nonsense.

‘Not at all,’ says Smith. ‘I was just talking, it’s a thing people do with their mouths.’

Tweet
This entry was posted on 28 November, 2013 in homepage and tagged dave tomlin, nick victor. Bookmark the permalink.