My wife is Bulgarian and hasn’t seen her family there for a couple of years. Because of the pandemic we thought long and hard about whether to travel there or not this year. As flying began to restart it seemed to be a practical possibility so we went ahead and booked flights. Pricing was somewhat weird as it cost my wife about 175 GBP for a month with BA via London. However, I had to pay around 350 just for 10 days!

We drove into the multi-storey car park at Edinburgh Airport to find that it was fairly busy. In the airport itself most folk seemed to be respecting the rules as face masks were worn, however sometimes not properly, e.g. wearing them under the nose or chin, or not wearing them at all when making phone calls. At Heathrow I noticed at least one person not bothering to wear a mask at all (although of course, there could have been a legitimate reason for this).

The flight to London was absolutely rammed – every seat taken. I had naively thought that the airline might have created some social distancing on the aircraft, but no! Presumably the wearing of face masks is meant to be sufficient to keep everyone safe. Of course masks could not be worn when eating the proffered snack and bottle of water, so some risk must still exist.

The flight from London to Sofia was only half full so that was a bit of a relief. Cabin staff were pretty good on the whole at enforcing the wearing of masks. However, they did have a bit of a problem with a couple of young women who had managed to bring some alcohol on board and kept drinking it even after being told not to. So of course they weren’t wearing masks but were also breaking the alcohol rules as they must have been drinking supplies they had bought at Duty Free. And of course in these Covid-19 days the airline does not sell or supply alcohol on board. So I was somewhat jealous to say the least!!

Car rental at Sofia airport was uneventful, as was the 90-minute drive to Plovdiv, Bulgaria’s second city – and the European city of culture last year – so it has been smartened up quite a bit! We stayed overnight at my daughter-in-law’s, then headed to Kranevo on the Black Sea Coast. This drive took around 5 hours. Kranevo is a seaside town and fairly close to Varna, Bulgaria’s third city, and a University one at that. By the way, the speed limit on much of the motorway system in Bulgaria is 140 kph – around 87 mph.~ 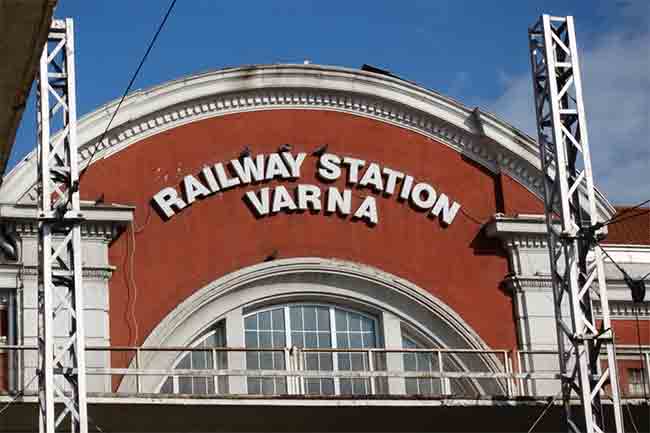 Many Bulgarians if they can afford it have a summer property. For example in Plovdiv, many will have a second home in the mountains where it is a whole lot cooler than in Plovdiv. In Kranevo we found a hotel for a couple of nights and visited my step daughter-in law for lunch on the second day at their summer villa. They have renovated and extended their property, creating a substantial ‘outdoor kitchen’, which is essentially where you spend most of your time in the summer. I remember one outdoor kitchen I visited in the mountains above Plovdiv – here the family had diverted water from a local stream down to the kitchen, where it flowed into a basin to chill wine and Rakia (Bulgarian brandy).

Most Bulgarians who have a plot of land anywhere will grow grapes to make Rakia. This is a national parstime that the EU tried to outlaw when Bulgaria acceded. However, there was a countrywide revolt at the idea and it was quickly dropped. So, it is perfectly legal to distil the stuff for domestic consumption. I have tried many samples and I have to say that often it is the home made versions that are far better than the commercial ones. Everyone has their own recipe, often enhanced with herbs for added flavour.

You can see some photos of my step daughter-in-law and husband’s vegetable garden and ‘vineyard’ here: 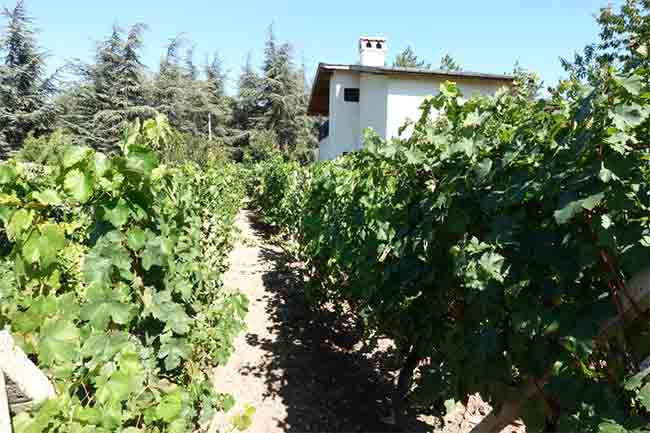 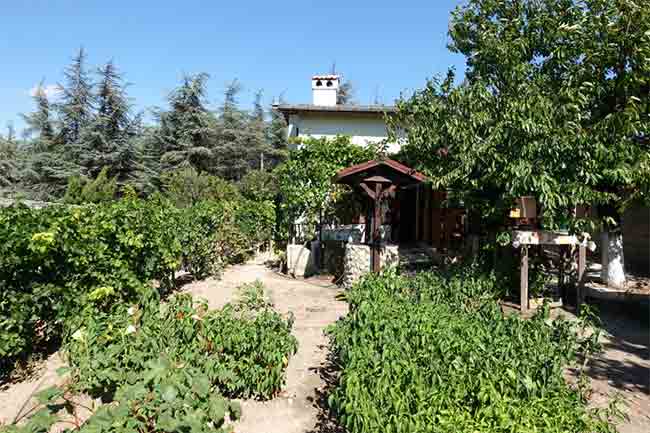 And the outside kitchen. You can just about see their well and the barbecue area!

In addition to fruit and vegetables they grow a range of grapes for wine and of course Rakia. Rakia is very interesting, not least as it is traditionally drunk ice cold with ‘Shopska’ salad. This is a salad of tomatoes, cucumber, spring onion and feta cheese, sometimes with some red onion and/or green pepper. It is often topped with a single olive on top of a ‘volcano’ of shredded feta cheese. The brandy pairs fantastically well with the salad, believe it or not!

Kranevo has a very long single main street. As a seaside town it has plenty of restaurants and tourist shops – many essentially just open fronted booths. We didn’t see any mask wearing on the streets or in the small shops, although some folk used them in the supermarket. Similarly, there didn’t seem to be much social distancing in evidence, although there were country wide rules about this apparently. Walking along the main street we saw one crowded restaurant with entertainment where the singer was leading a crowd of people doing the ‘Horo’ – a linked arm dance you do in a circle. They were doing it enthusiastically around a group of tables – absolutely no social distancing at all! 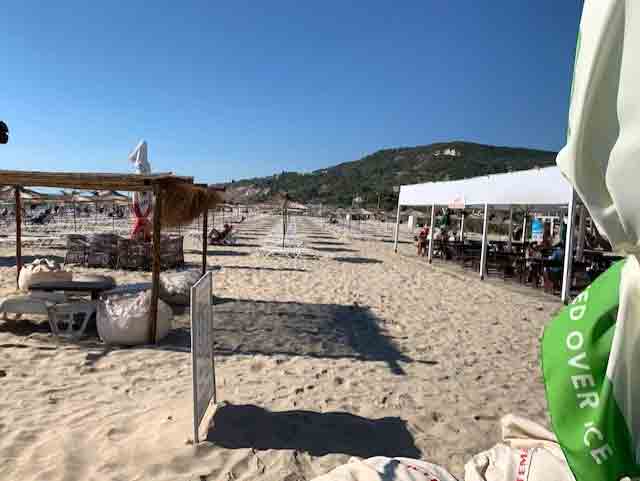 We then headed back south to the lovely coastal town of Sozopol. Recently they have renovated the old fortress wall and created a walkway along the clifftop. Impressive. This has nice beaches and a very traditional old town. This has ancient wooden houses and narrow cobbled streets – very atmospheric. 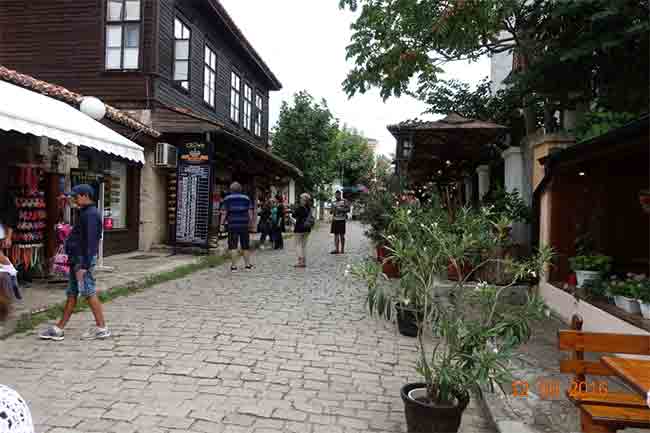 A new innovation this year was a pirate ship which made regular trips around the bay. Here are a couple of photos of it during the day: 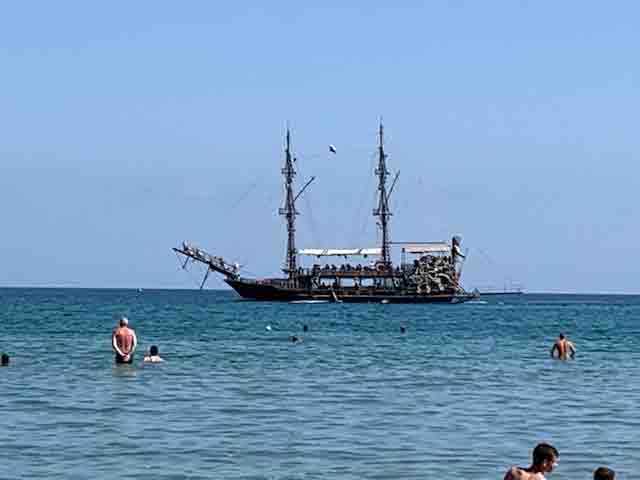 And lit up at night…… 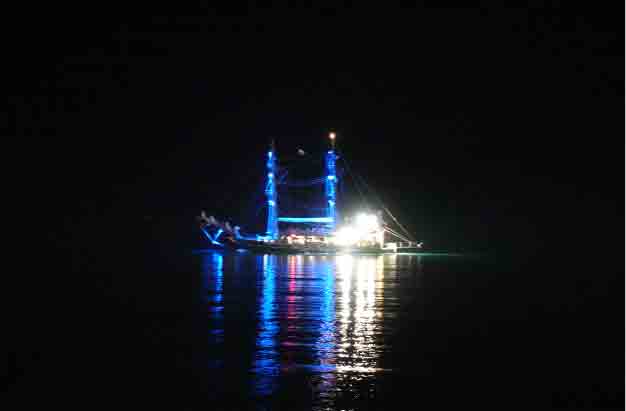 We were told by some locals that they wouldn’t go on it if they were paid, as it was built from old scrap components!

Here’s a photo of Sozopol’s central beach. This is run by the municipality so the costs of hiring beach loungers and parasols is reasonable at 5 GBP a day for two: 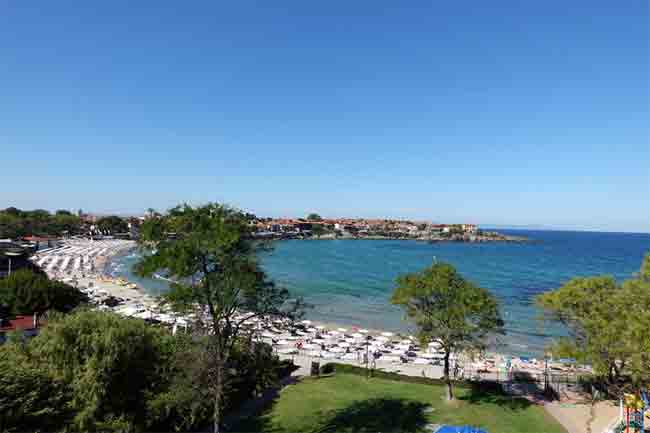 There are always bars and restaurants on most of Bulgaria’s beaches so you don’t need to go far to get a drink and some respite from the sun. September is a good time to visit the Black Sea Coast resorts as it isn’t brutally hot and you often get a nice breeze from the sea.

After five relaxing days in Sozopol we headed back to the city of Plovdiv. We helped my daughter-in-law by driving her to a DIY superstore. You can see from the photos here that masks were not always worn properly, and I spotted a couple of folk not wearing them at all. Social distancing in this store seemed to be set at 1.5 metres. 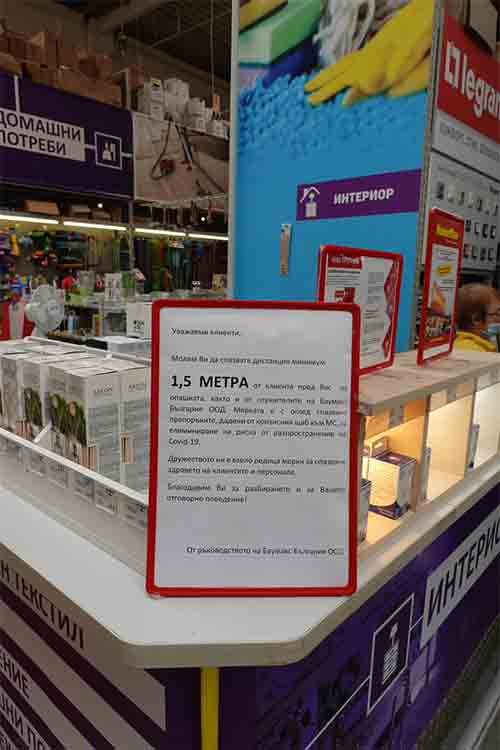 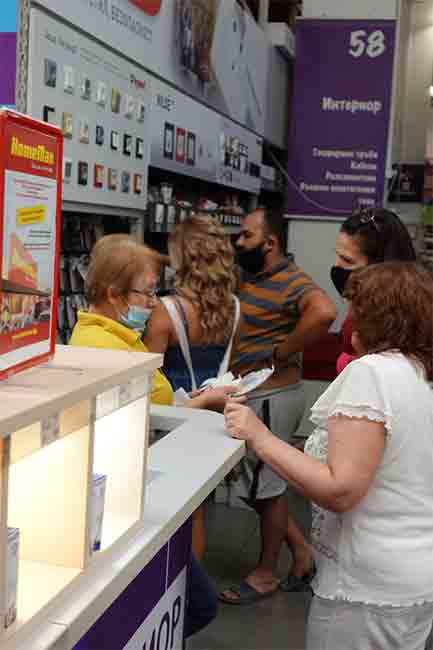 Here’s a photo of a typical small restaurant/bar in a street market in Plovdiv. 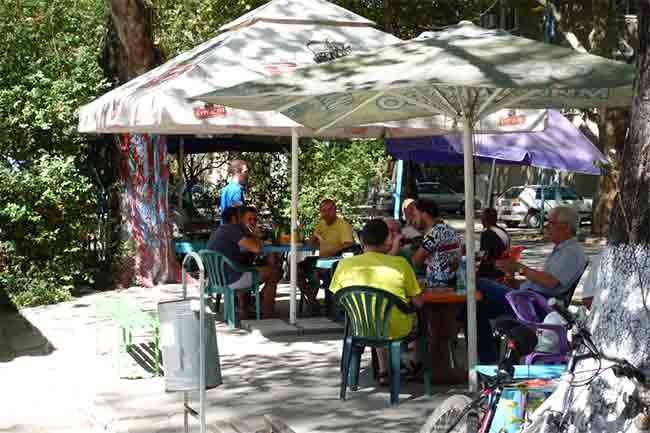 That evening we went into a newly created trendy part of the city called the Kapana (the Trap). 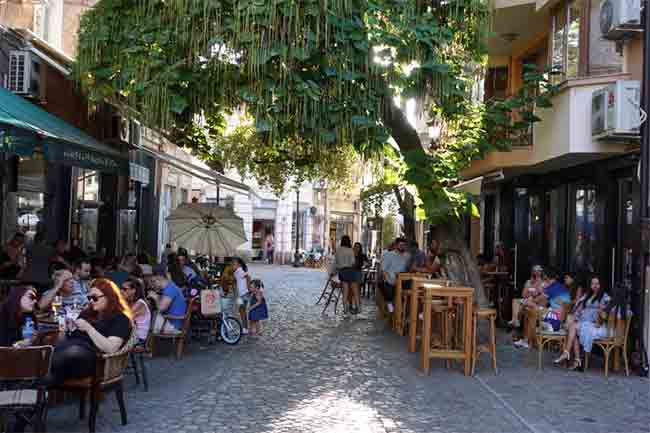 You can see from the photos that the bars and restaurants were clearly trying to maximise revenues by packing tables close together – so again no social distancing and no mask wearing. This area has some impressive and colourful wall graffiti! 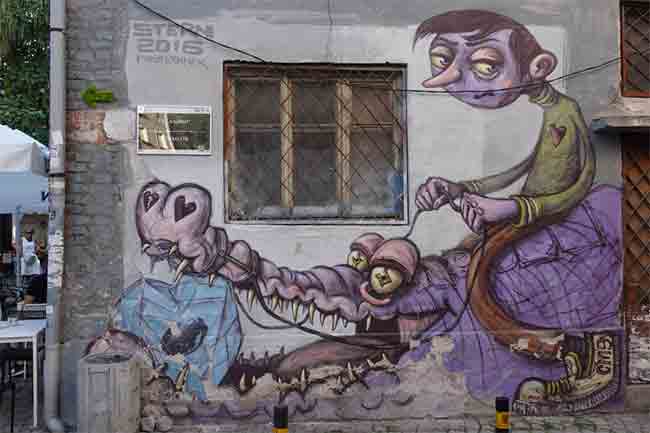 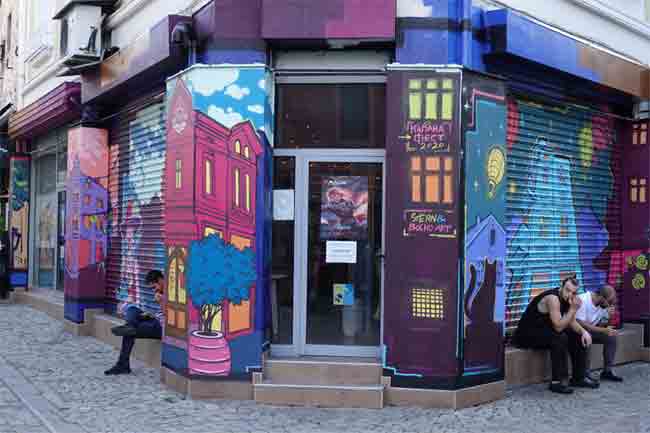 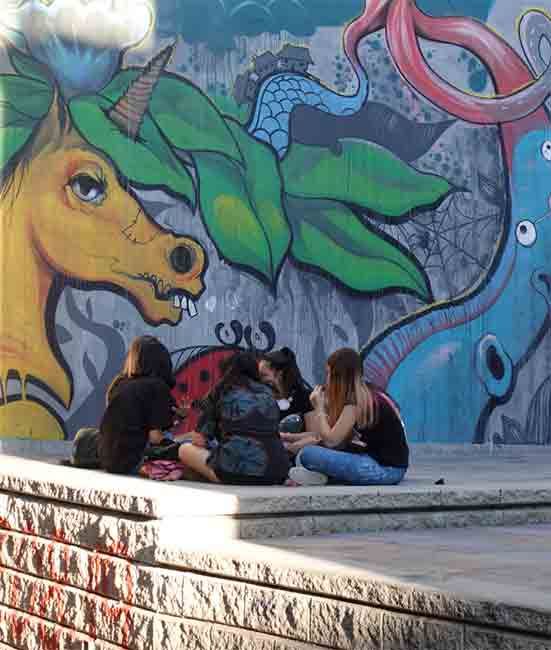 Plovdiv has some fascinating ancient Roman remains. Quite a lot was done in the run up to being last year’s European City of Culture to showcase these impressive ruins. Here’s an example. 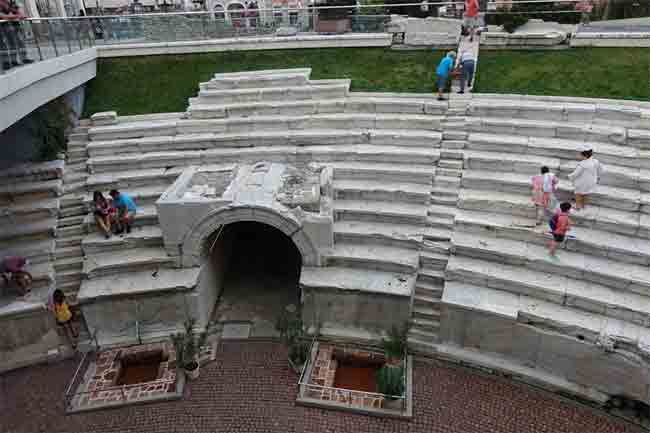 Incidentally, Plovdiv also has a Roman amphitheatre that they still use for opera and pop concerts!

I should give some context here I suppose about travelling in Covid times. Although I had to quarantine for 14 days on my return from Bulgaria, there seems to be little sense in this as the cases per thousand in Bulgaria are half that of the UK. So it seems that our government is embarked on some kind of political campaign trying to suggest that other countries are worse than us in relation to their Covid-19 rates, hence the need to quarantine.

On arrival at Sofia airport for the return flight we came into the airport via the underground car park, where we had to go to drop off the hire car. My temperature was taken before I was allowed in but my wife (who was staying longer in Bulgaria) was refused entry to the airport – ridiculous, especially as once I went in I could see that there was easy entry and exit via the main entrance. It looks like we just were unlucky to meet an officious security guard.

You have to complete an online government quarantine form before travelling back to the UK, and divulge a whole lot of personal details together with where you are going to be for the 14-day quarantine period. The airline sent this link to me well in advance, and as a law abiding citizen I completed it. Only to find out when I tried to submit it that you can’t do that until 48 hours before your flight! Infuriatingly, although the system said it had saved my details I had to enter them twice more before being able to submit. And – when you get to immigration in the UK they then ask you to find the damn details again on your phone and show it to them.

A final ignominy of air travel in the Covid-19 era is the paucity of flights – I had a 5-hour layover in London waiting for a flight to Edinburgh!

Here are some photos of Peebles in the Scottish Borders from before my travels. I suppose they indicate how relatively law abiding we are here, with masks worn in all the shops and often in the street as well. Indeed, I have often spotted cars with only the driver who for some bizarre reason was wearing a mask! 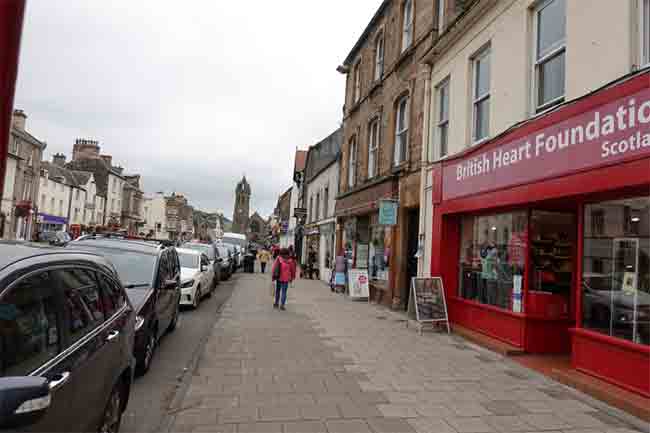 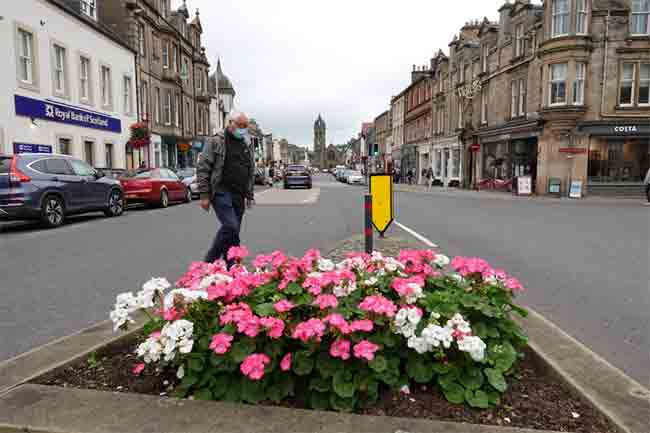 On my return to Peebles I was fortunate. As I am able to work at home, quarantine was not as much of a disaster as it could be for others, particularly if it was imposed while you were actually abroad. However, it is a real pain as you are not meant to leave your place of residence at all and need to arrange to get groceries delivered etc. 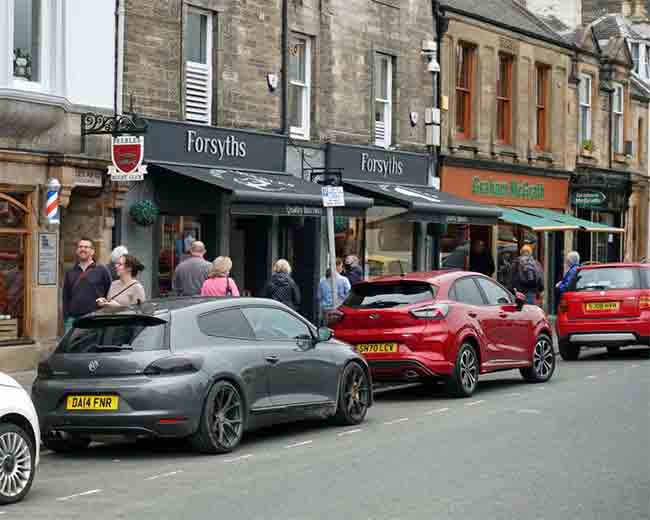 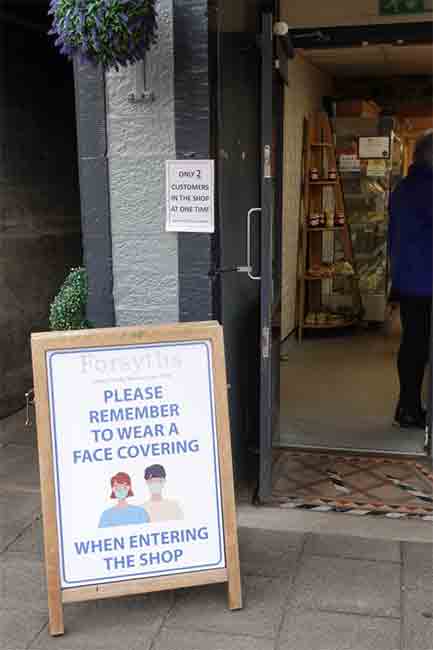 Overall, I am glad I did make the effort to go abroad. It was great to get some decent weather and participate in the outdoor café and restaurant culture for a while. So I think that travel is still eminently possible these days if a bit more hassle than previously.

Tweet
This entry was posted on 26 September, 2020 in homepage and tagged Howie Armstrong. Bookmark the permalink.