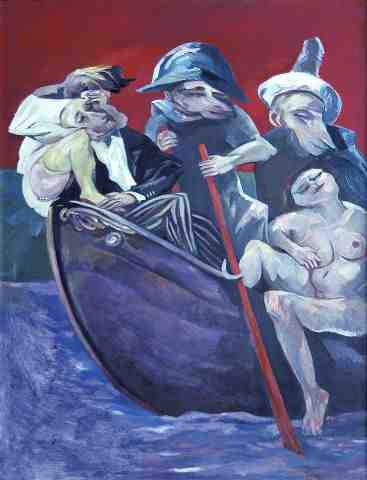 Elegy for a Painter – 1991
Stanislaw Frenkiel

‘They gave me an honorary doctorate five years ago.’

‘Fine Art. The Communists re-baptised it the Academy of Plastic Arts in 1992 to make it sound more modern.’

‘Really. But it became the Krakow Academy again in 1992, like an uncle wearing fashionable shoes settling back into his brogues.’

Stefko scratches his head. ‘Do you still have a mum Jerome?’

‘Yeah, I still have her,’ says Jerome, wondering at the old mans sleight of mind; shoes to mothers in seconds.

‘That’s nice. They shot mine’

‘I went to Poland to try and find her after the war and discovered that a couple of German soldiers stood her up against a wall, with four others – and shot them. They’d been queuing for bread.’

‘You cannot imagine such horror.’

Jerome closes his eyes; no he cannot imagine such horror.

‘I had no remains you see,’ says Stefko bleakly.  ‘Not even ashes,’

‘As we get old we need to have them near by; bones, ash, to feel we are about to join something that we came from. Eva and I found the pit where the bodies were thrown.  You have to know where a body is or you go crazy.’

‘Sure,’ says Jerome gently, thinking of the place where his father was buried.  I should go there one day.

‘Of course, it has now become a mass grave, with a marble headstone.  I read a poem there, Eva beside me’, says Stefko quietly. He takes the lump of amber out of his pocket.  ‘We smashed a piece from this and buried it in the pit.  You see its strange shape?’

‘That’s where I have rubbed the jagged edges smooth over the years.’

‘Right.’  Jerome thinks of the soldier’s tunic button that his mum had given him.

‘But we must not think about such grim things on a day like today – no?’ says Stefko, patting Jerome on his back.

‘Anyway, I will be joining them all soon.’

‘Georges Roualt? You knew him?’

‘He taught me in Paris.’

‘Are you afraid of death?’ risks Jerome, who assumes that all old people are. Like you’d be walking down the street and then boof – lights out.

‘We know when it’s near,’ says Stefko solemnly and I don’t sense mine just yet.’  I have found out where Mama is…and I would like to see Martha, he thinks, the two of them entwined again in his mind, the thought of one evoking the shadow of the other. He looks up.  ‘And now I want to visit Elegy.’

‘Want me to come with you?’

‘I am sure you got things to do Jerome.’

Stefko walks off in a tipsy zig-zag, across the room and into the next one. He stops at Elegy, the painting started within hours of hearing of Anton’s death, the painting preparing him for his own.  The colour is strong, that flat maroon sky, the boiling purple river, the boat’s prow slicing through the water, the blissful energy of the oarsman at odds with the grief on board – Anton lying lifeless in the embrace of his wife.  A naked woman (‘representing sensuality’ he’d told the curators) sits in the stern with another male figure in a suit. This is himself, there again for compositional reasons, he’d told the same curator, or the voyeur within the painting, he’d told another one – to see if they’d compare notes and which version ended up in the catalogue.  For compositional reasons, the catalogue declared.

He’d thought that death could be a dark figure, the grim reaper bending over his friend, closing his eyes.  But in avoiding that cliché, he may have chosen another one: Charon rowing across the Styx. But are such classical references clichés?  Or intelligently selected archetypes.  And what of my own death? He thinks. Soon? How will it be? It could be anything. Heart, brain, or just a general collapse.  I hope it’s clean and quick – that I won’t have to be on life support.  He shudders at the thought of being buried alive in a hospital – buried with what’s left of his mind. That would be hell. ‘Mephistopheles, you never thought of that one.’ he mutters. I’ll support my own life thank you very much, in whatever state.   He stares hard at the painting, wondering who might paint an Elegy for him.