Vytautas and a homeless man, and the new University of Uzupis, Vilnius, Lithuania 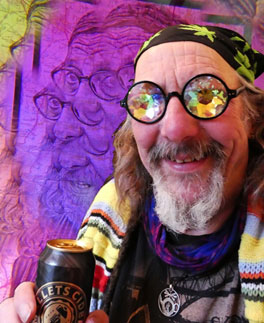 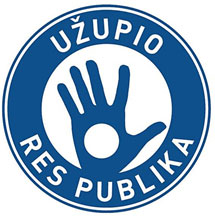 In the UK, Groudhog Covid Days continue. ‘Stay Home’ is the loud message, but society is divided and getting more so. Worryingly so, if civil unrest kicks off big-time across the world. It ain’t just the health effects of the pandemic. Alan Dearling tells us that his days are like those of many other people, repetition: feed – internet – writing/research/photography/editing (my work from home) – one walk each day for exercise and shopping – listening to and making some music – feed – watching TV and films – bed. Repeat. But there’s still time for some small lapses: Alan suggests: The media keep on going on and on about the ‘New Normal’. I kind of want to be beamed back into an ‘average normal’ and an ‘old normal’. Thankfully my life has never been normal ‘normal’!

So, I imagined what a pair of ‘old normal’ glasses could do to my life. Here’s the result.

Then there’s the Dooms-Day scenario. 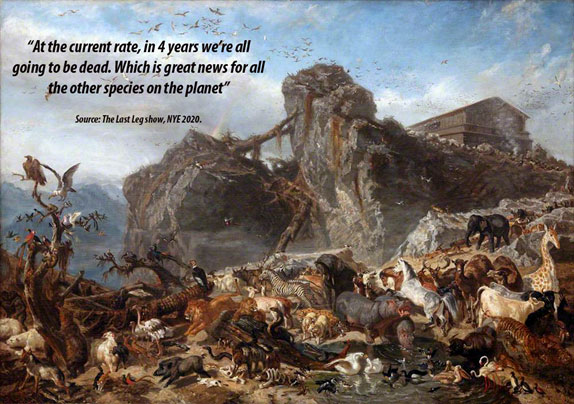 Next, Alan shares a tale from Vytautus. It’s a complex mix of tragedy, compassion and kindness in these difficult and sometimes tragic Covid-times…I have many friends and colleagues who are a part of ‘Uzupis’, myself included, as the Uzupis Ambassador for the Scottish-English borderlands. But firstly, some words about Uzupis and the new university.

As well as being a place and space for ideas, dreams and fun, it is an ethereal ‘dream’ that has been birthed and continues to be shared world-wide online during the pandemic. It is ever-evolving… The area is known as the Uzupis Free Republic situated in the Old Town area of Vilnius, capital of Lithuania. A special, quirky place, but very real. With a mixture of all sorts of locals and many visitors. It’s made more creative by the Uzupis collective group(s) (including the 300 Ambassadors worldwide), which help form its creative heart. As Thomas Chepaitis, Uzupis Minister of Foreign Affairs, says: “Užupis will never be only a success or freedom story. It is very mixed, paradoxical and touching texture…But it’s true, many local people are involved…alive people. And other stories emerge.” 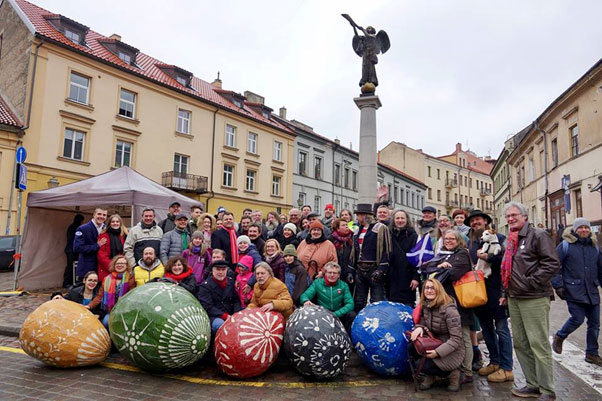 During the Covid lockdown I was contacted by Max Haarich, one of my colleagues from the Uzupis German consulate in Munich. “Would I like to join in as one of the potential staff members at a Uzupis University?” “Of course I would, especially when I heard that it has a mission statement that reads…”

Užupis University
Everyone has the right to become wiser & more foolish

At the moment it is an embryo, a seed of an idea. Wonderfully anarchic and a little bonkers. Not much to report on yet…but ‘Uzupis is Everywhere!’ 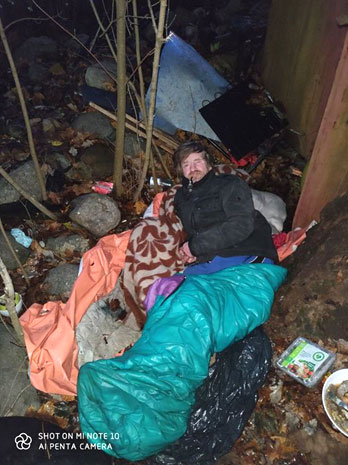 (Apologies from Alan if any of the words have been translated badly. It’s a blow-by-blow account)

A couple of days ago passing through our yard, my attention was strangely drawn to the old things, pots and wooden bits and pieces – we call it the ‘rakandas’. We really couldn’t see it very well but…the things were strewn around in a messy way. I was surprised, and even ran away a little bit, because one of the wet old things reminded me of a person’s head. This is somewhat secret, dirty and unpleasant place. And I was surprised because as I approached closer I became sure that in the midst of the rakand, a man’s head is lying!!!

I approached, oh my God, it really is a man’s head. I came closer…it was a person sleeping in the rain and alive. Alive!!! Thank God. I came closer and talked to him about what had happened. I received an answer from him, he’s a completely unhealthy person. Before here, he was abandoned, there is no place for him to live. Where to go?

He’s sleeping on the ground and rain. I suggested I can cook something hot? He gives a strangely polite answer: “If it’s not hard, it would be good.” I made rice with sausages. Then I baked eggs the other day. Got out early this morning the car and I thought, I am becoming obsessed with this man. I thought damn man a few days lying on the ground. I talked again, if he was sober, should I offer tea? I brought hot chocolate (because I thought in such a condition he needed not only warmth but also colour). Then I called Caritas for advice (a local Christian charity). What to do? They offered to call tomorrow and we’ll discuss. I have no resources right now, but I’m asking you, friends, maybe it’s possible to help someone?!? Maybe we would create something for this person together.?!?

But, the truth for lunch today, NEIGHBORS complained, and accused me of breaking the law, and complaining that I even gave him coffee!!! Because of this I am lost…I am not happy…how to find a better place for him? 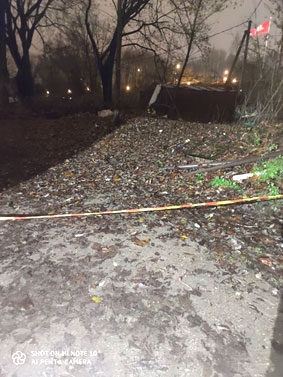 Yesterday, I didn’t want to go see what happens to the guy I now know is called, Nikolai. I have no idea how hard it is to fall asleep in the cold and nap, so today I woke up at 6.20 am. I warmed up the water because I thought I needed hot cocoa or some other food to cook for myself and for the person lying on the ground. But I stopped, because last time I baked him an egg with salmon, put into black bread nuts (I really like such a recipe). He said that the salmon is too rich. Because many people have different tastes, we are all really very different.

Today I found that there was no man anymore!?!? Where he has gone, I didn’t know. I’ll try a little later when it’s a good time to call Caritas and neighbours. I will let you know what I will find out. Thank you all for your support, prayers and help, THANK YOU all for offering help to a person, and your words and money and most importantly compassion!!! I will inform you what happened and what I found out about the fate of a person lying on earth. 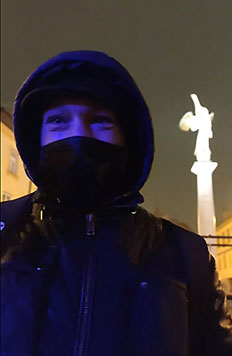 I asked a couple of street-people, where is Nikolai? One man says he went to LIDL store to warm up. Because where he slept in the old days (previously) everything was taken out to the garbage containers. My wife says that it will be -2 centigrade at night, so with such dampness, it would feel like -5 centigrade, so I will go look at the LIDL store, maybe  he is warming up there, in which case I won’t fell asleep myself, because today is a hard days’ night for me.  If I will find him, I’ll make a post at once, because the people have appeared! PEOPLE who can help him more than me.

I have now heard that Nikolai’s legs were beaten with hammer. The owner of the abandoned house where he slept did this. He is 54 years old.

Thank you my friends, from Nicholai and his friend Mindaugas .We received a lot of beautiful suggestions to help him with many gifts of between 5 and 80 euro. Some say they can provide a roof for him, maybe work, clothes, and tons of wonderful, marvellous, inspiring prayers and wishes. We already have bought him medicine for around 40 euro, hot chocolate, food.  AČIŪ.      Vytautas.

Tweet
This entry was posted on 20 February, 2021 in homepage and tagged Alan Dearling. Bookmark the permalink.