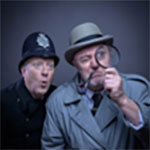 A murder mystery cast are stranded on the M6. The only two who have made it to the theatre, rather than disappoint, explain that they alone will play all the roles. What follows is hilarious and quite brilliant. The super-talented twosome assume various guises, even playing scenes holding multiple hats, representing the absentee cast. Holmes and Watson (their main roles) become a multitude of characters and, sometimes, it’s hard to know what is impeccably rehearsed and what is impishly improvised. Either way, they act their hearts out. The sweat pours, the laughs roar, and the audience give a well-deserved standing ovation. Equal plaudits to Gavin Robertson and Nicholas Collett, who brilliantly saved the day. If you can only see one show at the Fringe, see this. Excellent, by Jove! 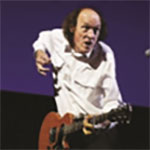 Beginning with his number one hit ‘Cor Baby, That’s Really Free,’ all the way through to his encore of ‘Headbutts,’ the standing room only crowd was blown away by the soon to be septuagenarian’s explosive energy. He puts his heart and soul into every performance, and old fans (and new) love him for it. The highlight for me is his performance of ‘Josephine.’ For all the craziness on stage, this song shows that he is truly a poet. He calls himself ‘Rock ‘n Roll’s Greatest Failure’ but he’s wrong. He’s had two hit records, two books, over 5000 gigs, a movie made about his life, and I hear on the Otvine that he is soon to have a great honour bestowed upon him (stay tuned, because it’s a humdinger). Bravo, John! 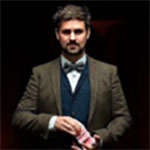 350 people filled the extremely hot ballroom. Extensive lights, video screen, live camera and pyrotechnics led me to believe this was going to be a spectacular show. Wrong. The tricks aren’t original, the delivery monotone, and with a name like ‘Quantum,’ there should be more tie-in with science. However, my problem isn’t just the show, it’s what it represents. Quantum packed the house because he’s a reality show star. Hundreds of Fringe acts dream of such crowds but will never get them if big venues keep producing these hollow money-makers. A known act in an ordinary show can’t compete with an extraordinary unknown at a smaller venue. Save spectacle for Vegas, support performers handing out flyers on the Royal Mile