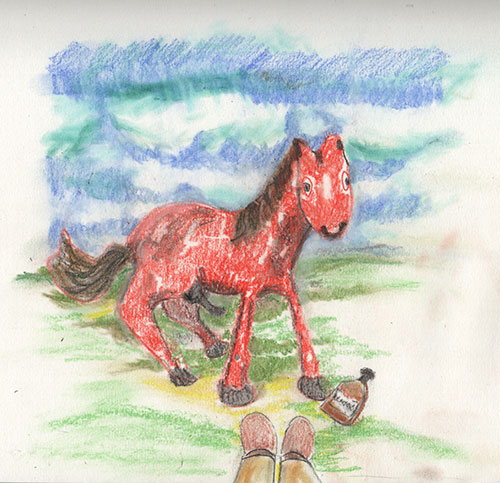 The stale scent of cigarette smoke enters your nose, waking you to a breakfast you’d rather not eat again. You think to yourself, “Mamaw ain’t so good at cookin’ no more.” Cheap supermarket sausage, corn bread, and a couple of rubbery eggs that at one time might have resembled food. It’s not a great breakfast, but it beats going to work with an empty stomach. A cup of cheap dollar store coffee completes the meal, and you begin your morning ritual of waiting on the front porch of your slowly rotting trailer home until Riley comes to pick you up. As you begin your journey in his dilapidated Ford pickup truck (replete with Confederate flag, right-wing bumper stickers, and a cross on the rear) you take in the vast scenery of the Kentucky countryside.

What would be beautiful hollows and valleys of the Appalachian terrain are marred by ramshackle mobile homes and the contents strewn about… one in particular draws your attention as you ride down the highway, the whine of bald tires underscoring your ever-present anxiety. The children’s toys still litter the yard, but the vehicles that were there are long gone. You see that other possessions are now strewn about. The corpse of a disemboweled couch lies in repose, foam batten ripped out as if by carnivores.

“They nabbed Jody this weekend. Child endangerment, manufacturing meth, possession of heroin. He’s going to get PFO. You ain’t gonna be seeing him for a while.”

Of course, you and Riley both knew Jody pretty well. You wonder how many times had you crossed the threshold there, stopping in at first for just a joint but consuming many beers and rotgut whiskey after? How many mornings when you just didn’t have it in you to work that you stopped in for a bump of some high-powered crystal meth that would keep you humming until 5 PM and after?

You think to yourself, “Jesus ain’t saving none of us,” with a great deal of guilt after. Maybe if you prayed a little harder, you wouldn’t have lost that good coal mining job in Letcher County. Maybe you wouldn’t have started running around with that whore Misty Thompkins and gotten into the drugs. At least you’ve gotten clean again. Two months without any opiates of any kind. Other things not so much, but at least you’ve quit the DOPE. Third time’s a charm, right? And there’s Jesus to thank for THAT.

As the morning sun pours over the mountaintops onto the small town you work in, a certain beam of light illuminates the sign that designates your employer, Dollar General Stores. Although the pay is laughably small, infuriatingly small, and not enough to live on, you consider the job prospects for people in the area and are thankful to have even that. Things were hard before Obama, but even worse when he came into office. Was he Muslim? Probably, look at his name. Did he hate America? He had to, why else would things be like this? Does he not understand that the War on Coal was killing Appalachia? You mull these questions as you stock the shelves, the $7.25-per-hour wage slowly accumulating into a sum you can almost live on, considering that Mamaw’s trailer is paid for. Between her Social Security and your dollar store dollars the bills usually get paid. At least this was a warm winter… those thin prefabricated walls did little to hold the precious, expensive heat in. Mamaw could afford all her prescriptions until air conditioning was necessary, probably.

You watch the people that filter in and out of the store. Hard people with sin and work chiseled into their face. Your people.

Except that god damned Cleve Jones, in town for the weekend. Who the hell does this guy think he is, anyways? “Well I guess if your daddy can afford to send you to college you may as well take it, but it don’t got to turn you into a liberal pussy,” you mutter to Riley. You can’t believe that he’d speak against the War on Terror on Facebook. How in the actual fuck do you support terrorists? What the fuck are they teaching in those classes? You wanted to speak up in defense of America but couldn’t put the words together. You won’t be going to Cleve’s kegger, most of your old friends weren’t invited anyway. Too good for the old neighborhood.

You had thought about college, but your reading and math skills weren’t up to par. Working on farm equipment and old cars with Papaw gave you skills with your hands, that you put to use at that good job mining coal in Letcher County. That you lost. Due to drugs. You could have gone into the Army to get some filler courses before taking on higher education, but that possession of heroin charge kept you out. Something will work out though, you can feel it. Trump is going to Make America Great Again. Trump is going to make YOU great again. Him and the rest of the Republicans are going to finally drive a stake through the heart of those godless, baby killing, nigger-loving, job-destroying Commie Democrats that ruined the economy.

For you, the idea of being the subject of that short fiction probably made you quite uncomfortable – as it should. For many others it is a grim reality from which they’ll never escape, the forgotten people of America. Occasionally used as a political prop or ethnographic curiosity and little else, they feel that they are a leftover part of a country that had long moved on.

The geographic isolation of Appalachia removes it from important trade routes, the inefficiency of mountain driving being a factor that most businesses wish to avoid. Besides coal and lumber, the land yields little that attracts the investor’s eye. Large-scale farming is impossible. As the old saying goes, “You can mine coal, grow dope, or starve.” This is not the only economically distressed area in Kentucky, though. Many places which were once homes to thriving farming communities have disintegrated due to the collapse of the family farm and the push towards the “Walmartization” of agriculture. Several areas that once housed heavy industry have seen those jobs leave for Asia. The people remain, though… some due to loyalty, some because they can’t find a way out, and others because they are scared to death of the world they see coming through their TV screens.

From the Mississippi River to the mountains of the east of the state, there remains a common rural culture, it’s local variants, and it’s modern corporate translation displayed in jacked-up pickup trucks and bro country. Once stocked with New Deal Democrats and outwardly investing in the people, political climate here has turned sharply Republican and as always, Kentucky’s most desperate poor will suffer the most. One Kentucky Trump voter was shocked to learn that Obamacare repeal may endanger her husband’s chance of a vital liver transplant. Angry and often ill-informed by Fox News and other right wing propaganda, these rural voters repeatedly turn out against social progress measures such as gay marriage, a woman’s right to choose what to do with her body, and benefits for disadvantaged populations such as themselves.

To blame only Republicans would be a sloppy proposal. Democrats, often underfunded since the US Supreme Court’s ruling the Citizens United Supreme Court case of 2010, (which opened a flood of corporate money in elections) have often surrendered more challenging districts, mostly in poor rural areas. Congressmen in certain districts who do not vote according to certain agendas face a slew of attack ads paid for by some of America’s most wealthy businessmen in the next election cycle and they know it.

This has been an almost 50 year undertaking since Richard Nixon’s original “Southern Strategy,” an attempt to blame the Democrats for the 1964 Civil Rights Act (although that vote was dictated on a North-South, rather than Republican-Democrat axis) and the campaign to meld fiscally conservative ideas with Southern Christian ideology. To those who know the scriptures about Jesus feeding the poor and healing the sick, it comes as an exceptionally perverse irony.

Not all is lost in the state, however. There are many little enclaves of prosperity and Louisville remains a world-class city with it’s foodie scene and creative culture. Lexington and Bowling Green are notable economic hubs. We’ve sold the world on Colonel Sanders and KFC, and the world turns its eyes to us once a year for the Kentucky Derby. 95% of the world’s bourbon comes from Kentucky, if you are a drinking person. Most of all you will meet more nice people here than not and that makes me hope for a better day.

Living here however, is a much different situation if you are one of the ones without solid financial prospects, a good job, or access to education. Kentucky was the last Southern legislature to flip from Democrat to Republican, a legacy of a party that once did great work for the common good of the working class. The Democrats are corporatists too these days, and in the era of unbridled dark money in politics they find themselves without a moral high ground to take.

So what causes people to reject basic facts and vote against their self-interest time and again? It’s a mixture of a lot of things. Corruption, propaganda, culture, ignorance, fear, and a host of other factors provide a catalyst for one of the worst political situations in the US. Welcome to Kentucky.

Tweet
This entry was posted on 13 April, 2017 in homepage and tagged Daniel Sherrill, Kentucky, nick victor, US Politics. Bookmark the permalink.