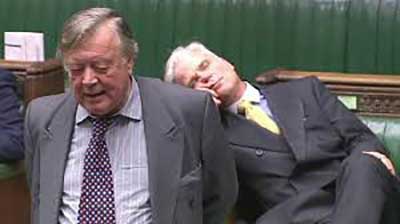 After years of intensive lobbying by concerned ministers the doors of Westminster have been opened to welcome some of London’s most vulnerable dead-beats and skivers 24 hours a day. Government officials supporting themselves proudly announced that, owing to their new changes, the cosy benches and central heating of the Houses of Commons will now be opened, not only 24 hours during the present cold snap, but all year round to some of the ‘most mentally disadvantaged people in the nation’s capital, and surrounding home counties.’

John Bercow, Speaker of the House, who personally backed the scheme which set a minimum eligibility of £300 per day personal income, soporifically sighed, ‘Many of the individuals earmarked for the latest all-year round scheme have home problems, usually caused by 1st, 2nd, 3rd and 4th marriage breakups which were caused after affairs with any number of their servants, colleges and other family members. Of course, most of them also have serious anti-social issues as well as substance abuse problems so they are basically as frail as frozen twigs on a cold winter’s night and would probably just snap in half if they mistakenly wandered outside for ten minutes without a scarf. That’s why I personally welcome these new plans. And let me just say; I strongly believe this is another indication of the new warming wind of real political change blowing along the corridors of government and out its wide open doors – so to speak. The scheme will also provide these decrepit parasites, some of whom I know personally, more than a part-time crash pad, but a real home and platform from which they can attempt, once and for all, to never get off the hackneyed cycle of state handouts and back into proper full-time employment. By the way, I also fully support the government’s minimum personal £300 daily wage limit. If we let everyone in who earned less that than, and God forbid the proper poor people outside, there would be nowhere to put our feet up will we had a good snooze. ‘

The move has also been welcomed by a group of MPs operating under the acronym TRAMPS; Torpid Rat Arsed Ministers for Parliament, and a representative for the group, who was not sound asleep at the time, had a good old stretch and yawned, ‘We are all very happy with the government’s… er… let me see… what’s this all about?… ah yes… decision. You see, old boy, when we’re passing new austerity legislation, like cutting low income benefits for the unemployed and disabled, or banning food banks and slashing budgets for homeless shelters, quite frankly it’s all terribly boring – poor people this – housing crisis that – someone-else-has-just-died-around-the-corner-because-they-didn’t have-£20-quid. Good Lord. It never ends. Well, I certainly can’t sleep in the car on the way back home to Surrey, or my second home in Berkshire, not the way my chauffeur drives anyway, and definitely not the way my second wife behaves after discovering my third affair with my brother-in-law’s old cleaner. Usually, I’m up all night playing poker and watching porn so, by the time I get back to the House of Commons at half past twelve o’stupid-a-clock the next day I’m half knackered already and not much good for anything. So it [The Houses of Commons] is naturally the best place to get a bit of shut eye. Oh yes. That’s right, old boy: £300 -plus expenses- while I get a good rest in the warm when it’s freezing outside. Then piss off at 2:00 back down the pub for a slap up meal and a few pints.’

Sir Desmond Swayne was caught dropping off during a debate on Brexit in the House of Commons. The …

Record number of homeless people reported to authorities amid …

View all posts by Ethan →
This entry was posted on 7 March, 2018 in homepage and tagged Ethan Harrison. Bookmark the permalink.