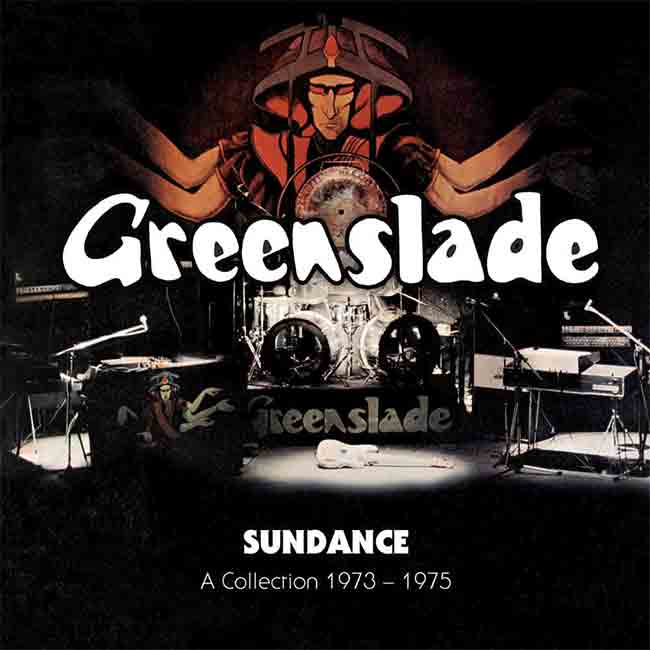 Hot on the heels of the reissue of Greenslade’s four individual albums, each remastered and with added bonus material, comes a best of: fifteen tracks over almost 80 minutes, with a generously illustrated book and essay.

The keyboard overdrive kicks straight into gear here on ‘Melange’, layered over clever bass and busy drumming, before the melancholy gloom of ‘Drowning Man’ arrives with it’s uneasy introduction and strange existentialist vocals. And then after the wistful evocation of ‘Sundance’ there’s a stonking live version of ‘Feathered Friends’ and the creepy ‘Bedside Manners Are Extra’ before the upbeat ‘Time to Dream’, with more awesome widdly-diddly synthesizer freakouts.

For me the compilation judders to a halt then with the overlong and tired prog-folk of ‘Pilgrim’s Progress’ and an overdose of shorter pieces from later albums. ‘Joie de Vivre’ is jolly enough, but ‘Spirit of the Dance’, which follows, is gruesome – especially the flute (synthesized or for real); both are plucked from Greenslade’s worst album, Spyglass Guest. No doubt a bit of a rescue mission; I’d have left that album totally out of the selection process to be honest.

Next up we get the vicious and snide ‘Newsworth’, possibly the best ‘song’ Greenslade produced, but we also get three other Dave Lawson vocal shriekalongs from Time & Tide, with no sign of ‘Catalan’ the album’s standout track. It’s soaring electric guitar and myriad keyboards, coming at you from alternate speakers are sorely needed here. I know it’s always easy to say where’s a missing track on a compilation, but really, the choice of bad rock rather than the prog keyboard workouts Greenslade were known and loved for is somewhat ridiculous. Anyway, the CD ambles to a halt with the lowkey ‘Gangsters’, which sounds like the TV soundtrack it was.

So, an interesting but flawed collection. Greenslade deserve better really, but hopefully there’s enough here to tempt the casual listener into further investigation.

View all posts by Rupert →
This entry was posted on 5 October, 2019 in homepage and tagged Greenslade, Rupert Loydell, Sundance – A Collection 1973-1975. Bookmark the permalink.