A Banksy Appears on a Building Overnight. Who Gets to Cash In? 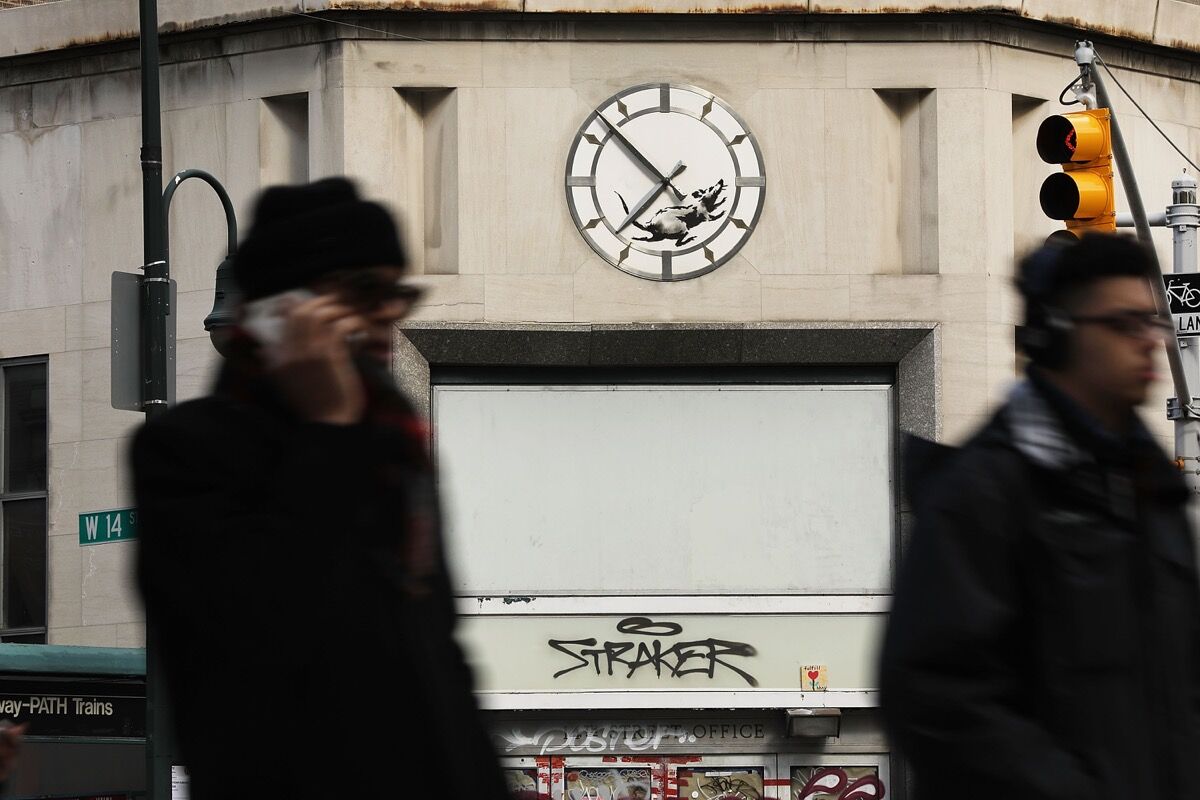 In New York City, spotting a rat isn’t usually something to get excited about. But when an image of the all-too-familiar rodent appeared in mid-March, sprayed in the clock face of a building on 14th Street and 8th Avenue, people took notice. The stencil heralded the return of the anonymous street artist known as Banksy to the streets of Manhattan.

But just days later, the pest was gone—removed not by animal control, but by the developer who owned the building ahead of its slated demolition. Now, there is speculation that the owner, Gemini Rosemont, may sell the Banksy rat, though the company said it is still evaluating its options. Many, including New York State senator Brad Hoylman, have asked them to display the piece in public (the developer preserved a 1954 mural by Julien Binford that was inside the same building).

“I hope the developer will take advantage of their good fortune and keep it public,” Holyman said.

While known for mocking the powerful as they strive to become objects of mass appeal, many of Banksy’s illicit street artworks ultimately belong to private landlords, not the public. After a late-night visit from the anonymous artist, property owners often wake up to find they’ve won the Banksy lottery: He has “vandalized” one of their buildings by gifting it a work by a world-famous artist. And then it is up to them to decide the work’s fate. 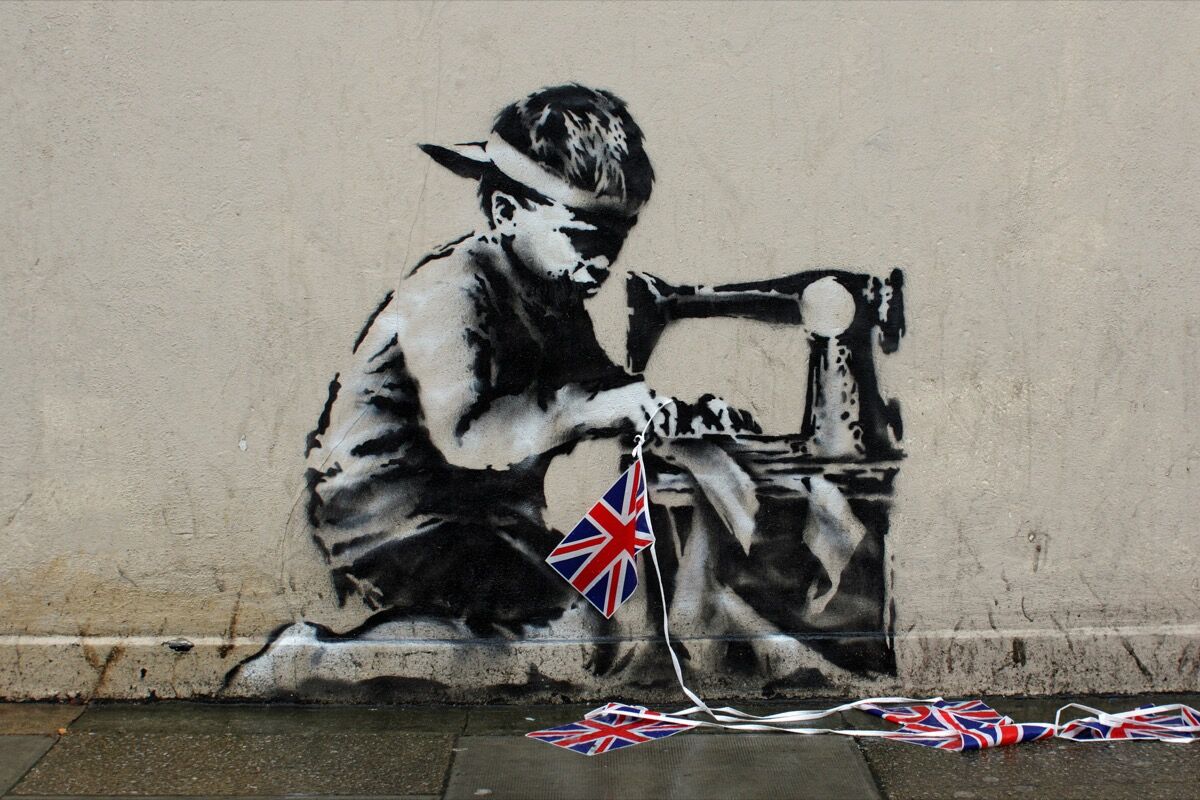 If the Banksy rat does hit the auction block, it would not be the first piece of public street art put up for sale to enter private hands. The artist’s Slave Labor (2012), painted on the side of the British discount retailer Poundland, sold for $1.1 million in 2013. Flower Girl (2008) fetched roughly $200,000 for the owner of the Los Angeles gas station wall that it adorned in a sale that same year. And there has been talk that the artist’s mural in the British city of Dover, depicting a man chiseling a star off the European Union flag, would be sold by the building’s owners before it is demolished.

The removal and sale of such work is extremely controversial and not always successful, but it is almost never illegal. Created in the absence of any contract or agreement with the property owner, Banksy’s illicit public art in the United States by and large belongs to whoever owns the bricks on which it appears.

“If you put a piece of artwork on property belonging to someone else, the owner of that property can generally do whatever they want with it,” said Andrew Gerber, a founding partner at Kushnirsky Gerber PLLC, where he often represents artists in copyright infringement disputes. (Whether the artist can enforce the copyright to their illicitly created work is a separate, and sometimes tricky, question from who owns the physical object, he noted.)

For this reason, legal challenges to the sale of a Banksy work of public art are almost nonexistent. One major exception came in 2015, when a British judge intervened to halt the sale of Banksy’s Art Buff (2014), which was chiseled off a wall in Folkestone, Kent, and sent to the U.S. to be sold by the building’s leaseholder, a company called Dreamland Leisure. The work was valued between £300,000 and £470,000.

While the judge’s verdict marked an exceptional outcome, the basis of his rationale was traditional property ownership. The building’s owner gave the Creative Foundation, a U.K. arts nonprofit, the right to the work. The foundation then sued Dreamland, which was just the leaseholder, to halt the sale. A judge ruled in favor of the Creative Foundation, finding that a leaseholder’s responsibility to maintain the property doesn’t extend to allowing them to remove a valuable work of art for sale. Art Buff subsequently returned to the U.K., and is slated to be put on public view in the town where it was originally painted. 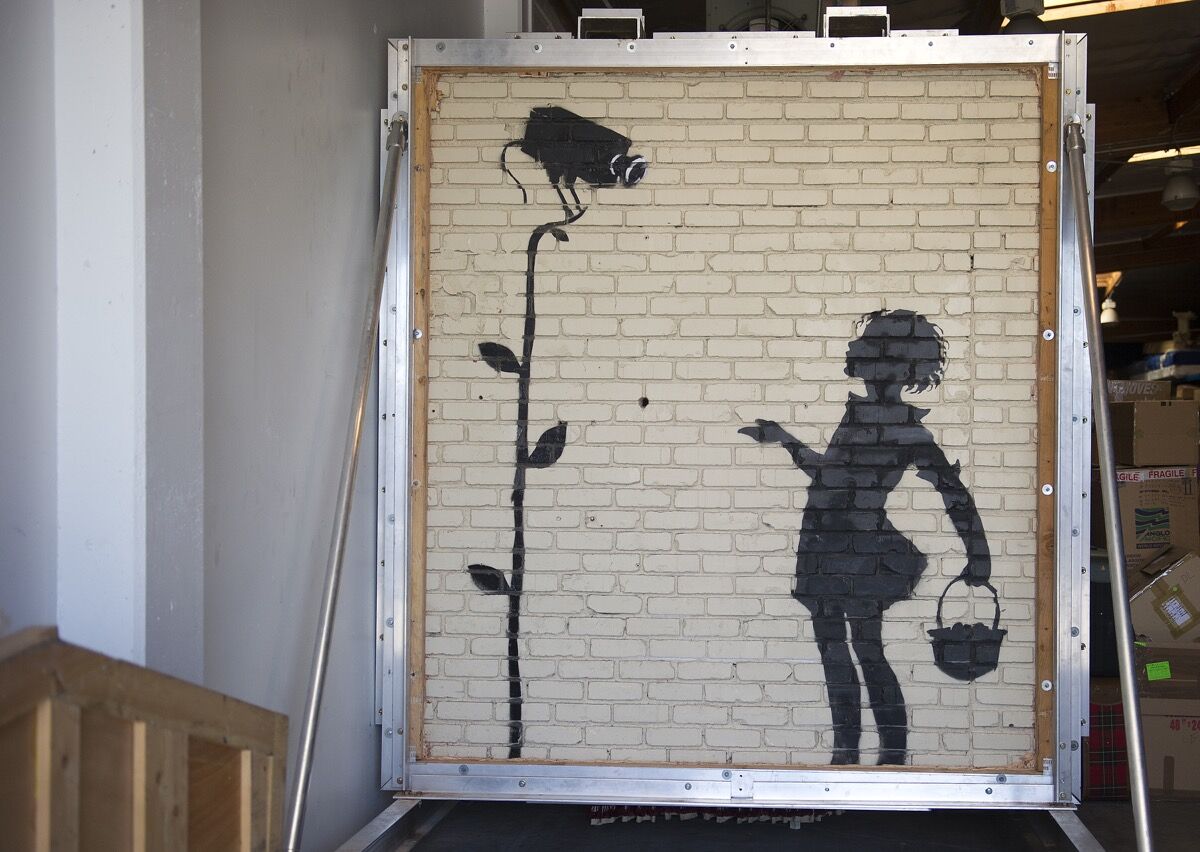 “It was, as far as we’re aware, the first time a judge [in the U.K.] has offered an opinion on a graffiti mural that has been painted without permission,” said Tim Maxwell, partner and joint head of the arts group at Boodle Hatfield, which represented the Creative Foundation. Maxwell noted that the verdict established what was essentially new law, though it was based on property law precedent from previous cases.

Those who sell the pieces reject being characterized as villains, instead arguing that they are engaging in a legal practice that actually protects and preserves works by an artist they admire. The buildings that Banksy’s works adorn are sometimes slated for demolition (as in the case of the recent New York rat or the EU flag) or become targets for rivals who deface them.

“If these works are not taken off the wall…they would have and they have been destroyed,” said gallerist Stephan Keszler, who was involved in the halted Art Buff sale.

Keszler argued that he’s putting Banksy’s work in front of more people, noting that tens of thousands of people came to see the Banksys in his booth when he’s exhibited at Art Miami. While he doesn’t have any works in his inventory currently, Keszler said he’s sold over 15 large pieces of Banksy street art in the last few years, at prices ranging from $75,000 to $1.2 million. (Keszler also said he’s considering breaking apart a Banksy street artwork he owns, the artist’s 2013 Sphinx, and selling pieces of it for low prices to the general public.)

But critics of the sales, including Tina Ziegler, director of the art fair Moniker, argue that Banksy is a street artist and understands the nature of putting his work in public, where it could be defaced or destroyed. She said the motive for those who sell his street art is usually profit, not altruism. 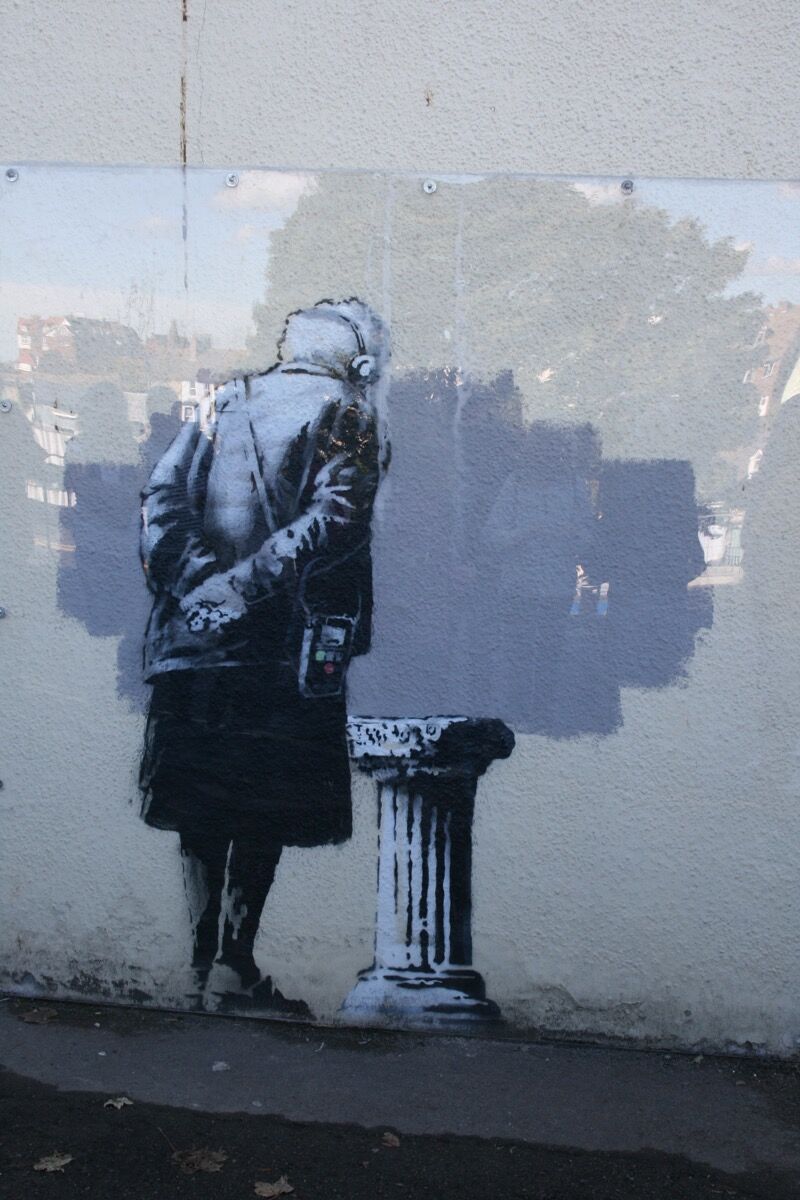 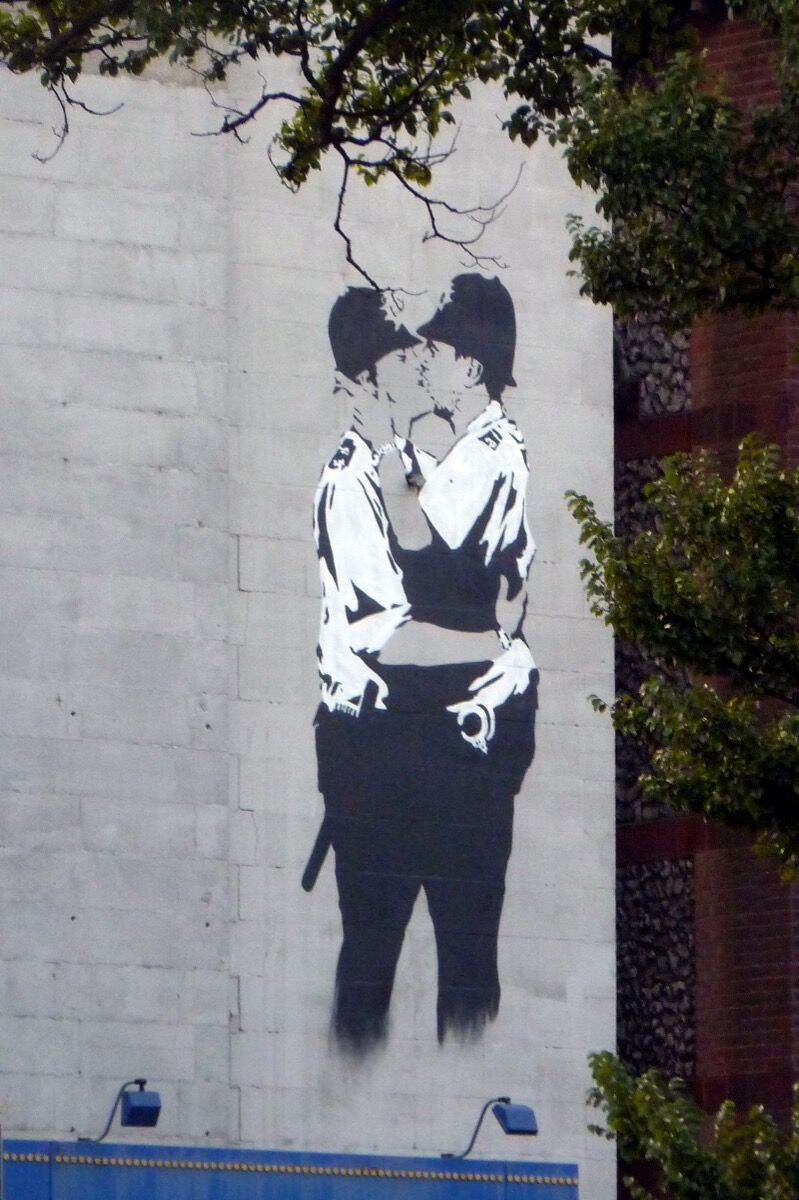 In the past, the artist has forcefully denounced the sales, issuing a statement excoriating “hedge-fund managers wanting to chop [street art] out and hang it over the fireplace” and encouraging “people not to buy anything by anybody unless it was created for sale in the first place.”

“When the artist is saying that, there’s no point to argue,” said Ziegler.

As a rule, Pest Control, the official umbrella company that handles Banksy’s studio business and other matters, doesn’t authenticate his street artworks in an attempt to suppress their potential market, and also to avoid admitting to a crime. The lack of authentication for street artworks means museums and prominent collectors are reticent to purchase them, said Ziegler.

Perhaps for this reason, some sales of Banksy street art can be remarkably unsuccessful. One example came in 2008, when the auction house Lyon & Turnbull offered five Banksy street works of contested authenticity. None sold.

Banksy also stymied profiteers when another artist lost their home because it was sold out from under them after Banksy tagged the exterior. In 2011, Banksy stenciled “this looks a bit like an elephant” on the outside of a California water tower, which an artist named Tachowa Covington had set up as a home. He had even furnished the abandoned tower with a couch, electricity, and other accoutrements.

But the tower was quickly sold by the city of Los Angeles to a design agency after the Banksy work appeared, pushing Covington into homelessness. Banksy didn’t authenticate the piece, leaving the agency buyers in the lurch, and the tank was ultimately consigned to a scrap heap. To make amends, Banksy gave Covington a year’s supply of money—though in July 2013, the Independent reported that the funds had run out and Covington was awaiting state-assisted housing. 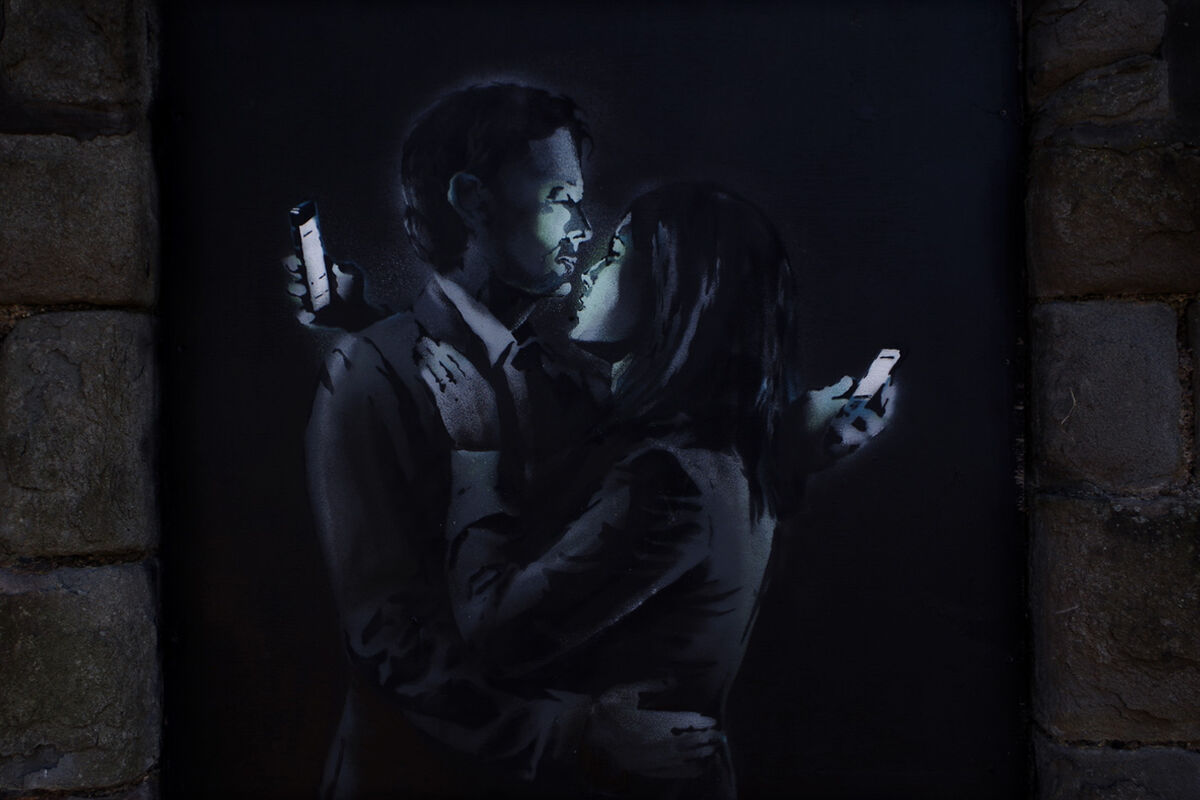 Complicating matters, the people who profit from Banksy’s street art aren’t always faceless corporate developers. The artist’s Kissing Coppers (2004) fetched £345,000 after being removed from the wall of a Brighton pub. The sum helped the pub owner keep his business open, but the sale was still extremely controversial with the public.

Banksy has occasionally intervened to facilitate sales. In 2014, Dennis Stinchcombe discovered Banksy’s Mobile Lovers (2014) painted next to the doorway of his youth club in Bristol. The city removed the work, asserting it appeared on public property and therefore belonged in a public museum. But after Banksy himself wrote a letter giving the work to Stinchcombe, the city backed off. Stinchcombe ultimately sold the piece for £403,000 to a private collector. The funds went to benefit his nonprofit, but the sale still elicited death threats, according to The Guardian.

Whatever Gemini Rosemont decides to do with Banksy’s rat, many people who otherwise wouldn’t care about the demolition of a building in New York’s Chelsea neighborhood are focused on the developer and what it does next. While a Banksy appearing on your wall can potentially bring a cash windfall, it also brings increased scrutiny and the potential for controversy—that’s just the nature of Banksy’s mass appeal.

“He’s an artist for everybody,” said Ziegler. “Not just the elite class.”

Isaac Kaplan is an Associate Editor at Artsy.
Stay up to date with Artsy Editorial
https://www.artsy.net
Tweet
This entry was posted on 4 April, 2018 in homepage. Bookmark the permalink.