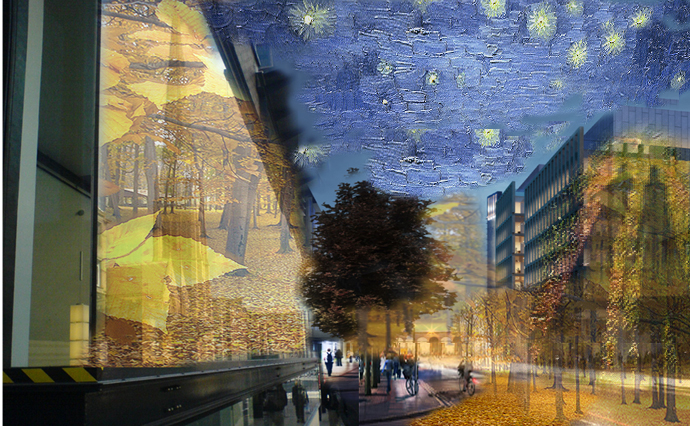 Autumn is a wonderful season especially for those sensitive to the pulls exerted by the Earth’s core. That means those ready to be pulled downwards. Those who do not resist the binding of all disparate energies recalled to the source during ‘The Fall’. Here is where we find ourselves again.   In awe to this great recurring gravitational episode of life.

The Equinox is upon us – and ‘fall’ we must. Along with the browned and sunburned leaves that flutter to nature’s floor. Along with the retreating earthworms, bees and the last windblown butterflies of summer.

For it is only when we too allow ourselves to fall that we can experience the full power of the great turning and be refuelled and refreshed, made ready for a renewed rising when the sun once again  spreads it’s waxing powers upon a receptive planet.

Of all the seasons, this is the most important one not to be rushed in. Autumn is nature’s resting and restoring ground – it is her meditation. Go in, in, in, and see for yourself what treasures there are! What mysteries hang in the softly rising mist that lays a protective shroud over the mantle of this Earth.

Give yourself the rest you need. The contemplation. Do not deny yourself the ‘letting go’ that nature teaches. Do not make excuses for why you can’t re find the you you really are. Do not fight the essential repose that is at the heart of autumn. At the heart of ‘the fall.’ For if we will not fall how can we arise again? Do not let the flattened landscape of military-industrial havoc take your soul instead.

This is the message of the great turning – and we humans are a part of it. We are ‘of nature’. That is what we fight for when we go out to do battle with the mad destroyers. This is why we give our all to block the GMO, the ‘fracking’, the nuclear  – all the toxic killers. Somewhere within us we remain at one with the great circadian rhythm of the seasons. The trouble is, that ‘somewhere’ is (for most) buried under a great pile of superficial, superfluous parafinalia that swamps nature’s messenger, blocking all attempts to send out the call we are meant to hear.

Such a garbage laden blockage prevents us from deepening our emotional being; so much so that we can no longer draw from the well of life. We cannot be renewed, enriched and readied for what is to come. The autumn just passes – and is herself saddened by the lack of company on her ongoing journey towards the winter solstice.

A saddened nature is less resistant in combating the toxic insanities which are dumped upon her. Her immune system is weakened – and in this state – that which kills kills more readily. While we  kill nature, she is trying to live. She is reminding us, every minute of every day, that we should also live. She never tires in this.

That, maybe, is the reason why those who can’t stop to listen would rather put an end to her.

Put an end to that persistent voice that has an annoying habit of reminding us that there is something all together wrong with the way we are living our lives – and treating that which nourishes us.

To many, the answer to this nagging interruption to their daily addictions is to shoot the messenger. No gun required; just turn on the TV, crack-open a beer, go to the fridge, stick-on a catchy piece of music; chat on the internet, mow the lawn, fiddle with the smart phone –  you know the rest.

Then there’s another way of shooting the messenger: get a job which negatively impacts upon the health and welfare of this living breathing planet. That means most jobs.  Because most ‘jobs’ are built upon a denial that the great turning even exists! They plough right through and flatten it without even realising it’s there. They nullify the life force with their money obsessed paralysis, thus rendering void all things living.

‘Nine to Five’ is not the way to stay alive – it is a programmed parasitic work ethic designed to automize and suck the life out of humanity. Avoid this fate if you want to remain sentient and subtle enough to respond to the messenger’s call.

Now, as the northern light draws in once again; as the sun’s rays soften their summer brightness turning to amber hues of golden warmth – go with them. Even if it pelts with rain – splash with it. Go to the fecund underworld which quietly ferments that which has passed and slowly rekindles the sleeping seed that is the new life to come. Go there. For this journey is life’s gift – and it is madness not to dip deeply into so potent a brew.

Our world stands on the brink of discovering itself anew. We are a ripening fruit on the tree of life. The great change that we yearn for awaits within us to be given clearance to fly. You have only to let go of your hold on that which holds no promise.

Let all things superficial fall-away. Let gravity take them to be melted down in the great furnace below. Let all become deep and move to the rhythm of celestial callings. Remove the watch whose hands tick-off the hours – telling only the story of linear time and the division of oneness into a million splintered parts. Nano particles that glitter in the neon flattened windows of sterile main street money. Let die that part of you which still clings to such a nefarious chimera.

A great turning is upon us. Spare this day to enter it’s temple. Touch a deeper seam in your trembling soul and share your treasure joyfully. Do not deny yourself the initiation and rite of passage that awaits you. For what emerges out again from here will bring to our war-torn world a profoundly needed nourishment.
…………………….

‘The Great Turning’ is the title Joanna Macy has given to her life long work in Deep Green Activism. Joanna is now in her eighties and is still active. She visited Julian’s farm this last summer and addressed a joyous meeting of international supporters and friends.

Julian is an early pioneer of organic farming methods, an international activist, actor and author. His book ‘Changing Course for Life’ can be purchased on www.changingcourseforlife.info and his forthcoming book ‘In Defence of Life – Essays on a Radical Reworking of Green Wisdom’ will be published later this year.  Julian is President of The International Coalition to Protect the Polish Countryside.