ADRENALIN FOR THE STARS Irising in, song is soul and is seen and heard through the singing
As Dreams Take Flight starts ascension through Johny Brown’s
Sainted voice. On a soundtracked wave of light and steady strum:

Fresh directions, as  A New Clear Vision emerges and shows
Each soul and heart their fresh choice. The song is a directive
Of course as well as direction as ‘vinyl fairytales.. reveal  how anything

Is clearly possible…’  the sounds within shimmer, as they source
And spark captive air. Borne by winds of smooth synth from Peter Smith,
Guitarist James Stephen Finn and Pere Ubu’s Graham Dowdall,

Here is a Utopian broadcast instructing each listener how to care.
The song is a sermon of sorts as Band of Holy Joy rip through remit,
Honoured now across decades of musical calls for change.

It shines a light across sound, leavening the dark that surrounds us,
As intent and urgency intermingle and ‘the hemispheres come into
Contact with the earth and all love is saved…’ for our age. 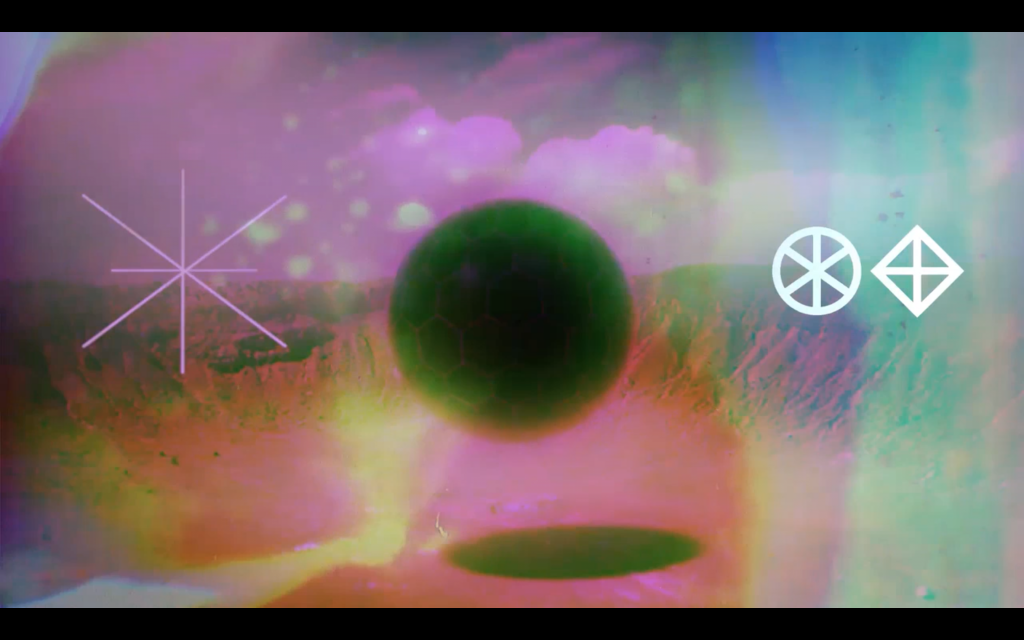 Through their living as the band’s history becomes building
In London’s  Gallery 46. This unique track is a tour of what
You will see and hear when you visit, a virtual indication

Of what music and joy hope to heal.  The song trips along
Thanks to Mark Beazley’s bass and Daryl Holley’s drumming,
Barbara Bartz’s string arrangement powers your gaze,

Makes it real. The song is also time travel if heard before
The exhibition and four night residence opens. As well as
Its own strange curation if heard of course, afterwards,

As we remember a night which we have not yet encountered
But are living now as we listen, the music revalues all of memory’s
Treasured goods. It should be stated herein that Covid stopped
These dreams rising. Now, a year later, they colour and cloud
And claim form. Heard through the hand and held of course
By this waiting and released like a caged bird thanks to Ashfield

Street’s open doors. On Set Romance Don’t Usually Last
Flanges in as Finn’s guitar melts each moment. Love’s experience
Becomes movie, and in being abandoned half way through

Touches all. As if the Cinema we’re all in were playing back
Desperate aspirations where ‘dressing like the enemy for so long’
Leaves the singer seeking a forgotten friend’s distant call. 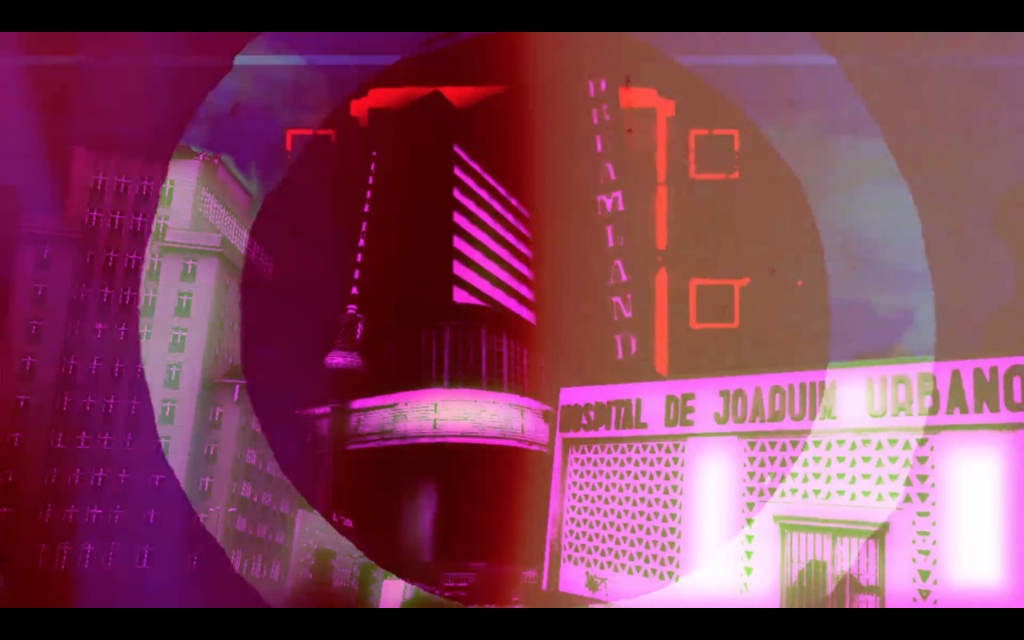 We have been made villain and hero in turn by what we have
Been through.This song shows in passing how ‘Forbidden
To fraternise’ our stopped stories mean that by ‘Making love

In the face of death’ we’re in thrall to the hidden feelings
Which rule. A Smiths like sound chimes and jangles.
Brown croons and colours the desires and dreams

Framed by Walls. Take A Leap Into The Great Unknown
Explores space as each instrument orbits before Johny’s vocal
Stormcloud or meteror shower bursts through. ‘Take a leap

Into the Great Unknown,’ he sings, as programming and electronica
Splices, ‘We don’t have to face this thing alone.. Eternity can be ours
For ever…’ and is, as pitch and frequency elevate us in this song

Sparked broadcast where the external and internal join forces
To master and seize cosmic truth. That Magic Thing sees Brown ask
Why the trial of love finds him wanting, as he swims through Spring’s
‘Snowmelt’ towards a woman’s rejection, calling on ‘Pyscho magic’

To reclaim the ‘dizzy glow’ of lost years. He seeks to elevate and reach
The high state as Finn’s resonant  guitar rhymes beside him,
And Beazley’s glockenspiel sing’s the childsong that accompanies

Each word’s tear. The track is a requiem for a time in which
‘The poetry of extinction’ is bettered. Within this simple beauty
The album as a whole shines its light. We can weather each storm

And return to the prize we once mastered. Turn your sleeping face
Upwards and watch how your dreams in turn can take flight.
This Is The Festival  Scene tells this tale as Brown and Band revivify

Celebration.With Madam’s Sukie Smith there beside him,
‘The island  of light’ sources sea that has flowed so dark
For so long which Andy Diagram’s trumpets crest over

And the Technicolor Cinemascope of the music becomes
Crowd and clamour and documentary too in widescreen.
‘Stranded savages’ lost in fields roar in strange echo

Of the music made to transport them. With such calls
Corrupted nobody truly knows how to be. The Rhythm Of Life
Marks return through Finn’s attendant guitar and stately piano

As Brown’s long hated city is brought to strong task, criticised.
As he surveys the sad scene he seeks resolution, breaking through
Bars and borders often self imposed to defy the defeats

Of each day by seeking new ways to recover and where love
Could ‘spark the struck streets’ and all of our associations remains
Uncriminalised. ‘This is the city we Love,’  as this beautiful music

Emphasises. In our dreams we’re delivered. But only the postings
Of joy see us rise.  Final song When Love Is Not Enough pushes point;
‘When  sodium lights on stricken trees/Make strange patterns of disease..

And cause this unease..’ we’re all burnt by the scrutiny split
Between us. Here are words, then,  of warning through which
We must not block, but unite. As the second sermon begins

And calls us all to bear witness not only to the forces within us
But to those we cannot see, Dreams take Flight. What we had
Once is still ours. We just have to remember. This vital album

Reminds us. Even postponed it still speaks. For the now,
While renewed dies hourly, as it happens.  But Band of Holy Joy
Anthem not only the flight path, but the directions towards

The next peak.  They show us the way to become one
With their music. Heard through Brian O’ Shaunessy’s rich production,
His former Primal Scream sauces sound. As does Stuart Maxham’s

Mastering, as this Young Marble Giant helps raise Band of Holy Joy’s
Stone sourced maxims towards a shared cosmos in which every breath
Stays profound. Rise, then. Reveal. And let these songs be your siblings.

We are all one family sleeping.  If we share these dreams
What was taken and what was lost can be found. This album
Provides adrenalin for the stars and shows them how to move forward.

Here the soul achieves soundtrack.
And the gathering storm’s 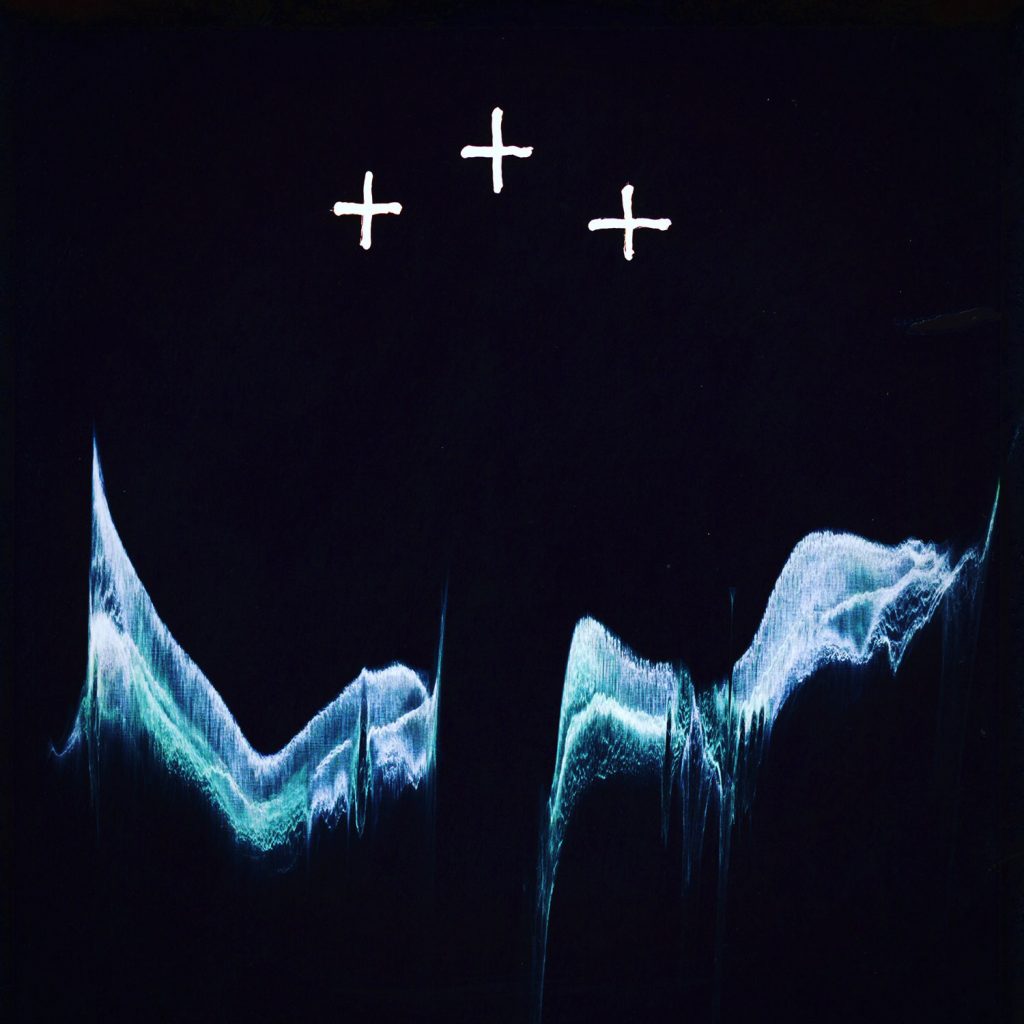 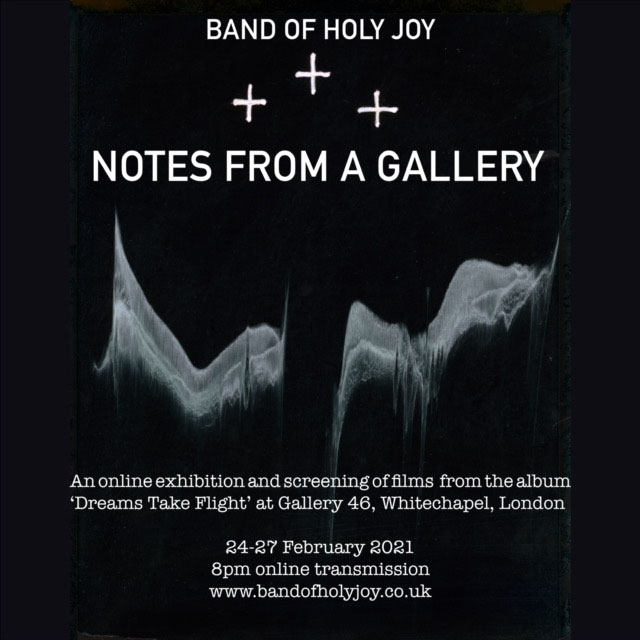 NOTES FROM A GALLERY

Band of Holy Joy present Notes From A Gallery an online exhibition of short film, performance art, live radio, collage art and sound production created and transmitted live from Gallery 46 and broadcast on our you tube channel.

The short films have been commissioned especially for the band’s forthcoming album Dreams Take Flight, a set of 8 songs whose themes are concerned with walls and mask’s, constraints and freedoms, crowded isolation and clouded behaviour.

The songs themselves are shot through with personal ghosts and private acts, fleeting doubts and moments of hope illuminating the tricky art of living with love in these dark precarious times, always hoping to get by through magic music and light.

As a statement of intent we will inhabit Gallery 46 for the duration of the exhibition and create visual and sound works whilst we are there, setting up a radio station, creating visual works, recording sounds, breaching isolation.

This exhibition will run nightly from the 24th to 27th of February. We will be showing two new video films a night with a performance that corresponds or is inspired by that evening’s films.

Here are the film makers…

And the performance artists

With more to be announced…

THIS IS THE FESTIVAL SCENE – Alexandra Lort Phillips

Alexandra Lort Philips lives in Edinburgh where she is producing theatre and film, she is the cofounder of Yardheads along with fellow artistic director John Paul McGroaty.  https://yardheads.wordpress.com/

TAKE A LEAP INTO THE GREAT UNKNOWN – Jonny Mugwump

Jonny Mugwump, formerly of the Exotic Pylon, oversees The Neon Hospice radio station, is digital editor at large for Repeater Books and comprises one half of Psychological Strategy Board  https://linktr.ee/jonnymugwump

Inga Tillere is a Latvian born London based artist working with photography and film. Inga is responsible for all Band of Holy Joy visuals from sleeve to screen to stage.    https://cargocollective.com/ingatillere

WHEN LOVE IS NOT ENOUGH – Gil De Ray

Gil De Ray is a musician film maker and one half of the multi-media duo Cold Lips. Originally from Glasgow and now residing in Berlin Gil has toured across the world blending musical performance with video projections. He is currently working on a 50-minute, psychedelic road trip film ‘Pathway to the Stars’ with an accompanying soundtrack album. https://gilderay.bandcamp.com/

Tam Dean Burn is an actor across many platforms and theatremaker. He has been working extensively with the artist Bill Drummond. He also sings in the Burnsian band The Bum-Clocks and plays baritone horn in the Glasgow community brass band Brass Aye. Tam is a committed activist focussing this year on COP26 in Glasgow in November https://vimeo.com/tharmas

NOTES FROM A GALLERY – Bjorn Hatesklog

Bjorn Hatleskog is a Scots Norwegian experimental musician and sound artist based in London. His work explores the nature of feedback loops and, noise and interference. He is a joint curator of the Liminality performance art exhibitions an integral member of Tuatha and runs the record label adaadat      https://www.adaadat.co.uk/romvelope/

THIS RHYTHM OF LIFE – Fliss Kitson

Fliss Kitson is the drummer and co-ordinator of The Nightingales. She is an illustrator who graduated from Norwich Art School and has continued to express herself with illustration ever since. After seeing the videos Fliss made for The Nightingales, Band of Holy Joy asked her to contribute to this present collection. @flisskitson

Jo Joelson is a London based artist, researcher, writer and educator. She has a background as a practicing lighting designer with a pioneering, experimental and interdisciplinary approach. She is the author of the wonderful book Library of Light.

View all posts by David →
This entry was posted on 6 February, 2021 in homepage and tagged band of holy joy, David Erdos, Johny Brown. Bookmark the permalink.