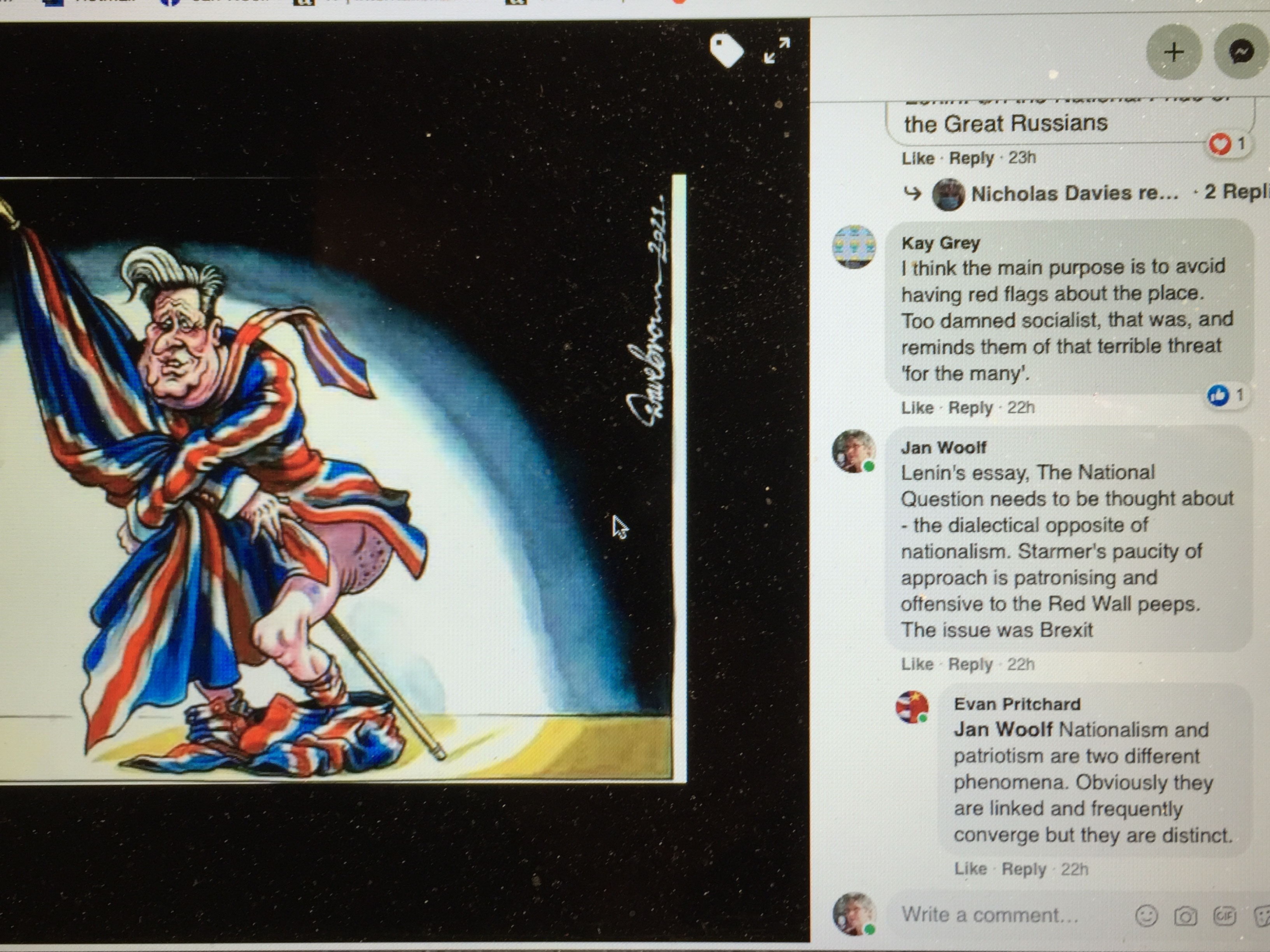 Image: Jan Woolf and others

Starmer’s plans to woo back working class voters ‘oop north’ through risible courtship rituals of PATriotism is misjudged, PATronising and insulting.  Had Jeremy Corbyn not slipped another EU referendum into the 2019 manifesto, he’d have won the election, despite the establishment’s press campaign and bogus anti-Semitism smears.   So before we hear about any more flag waving from Sir Kier…

I revisit my essay, a work in progress…much like a country outside a neo-liberal block (spelling deliberate).

…this business of our relationship with our country –  the ‘ish’-ness of us – is important.  But we’re in a pickle with it, no?  Orwell is still right –

‘England is perhaps the only country whose intellectuals are ashamed of their own nationality. In leftwing circles it is always felt that there is something slightly disgraceful in being an Englishman and that it is a duty to snigger at every English institution, from horse racing to suet puddings.’

George Orwell – The Lion and the Unicorn

But those 4 ‘Pursemen of the Apocalypse’ the freedoms of movement, capital, labour, goods and services which apply to all EU member states, sent a British electorate to vote with their gut as well as their heads. For it came down to this  – in whose interest is the EU?   Most thought it wasn’t in theirs, and so the nation spilled its guts on June 23rd 2016.

So what’s a nation when it’s at home?

‘… a historically constituted, stable community of people, formed on the basis of a common language, territory, economic life, and psychological make-up manifested in a common culture.’  Vladimir Lenin – Thesis on the National Question 1913

It’s a given that this common culture is dialectically formed; affected, changed and enriched by immigration and integration. Enrichment from other cultures is part of who we are collectively, and is natural.  It is natural too to love where you were born and grew up, feeling rooted; this is part of our social survival, in order to defend ourselves, family, street, town, and country – a thing we helped shape.

It’s Janus face, Nationalism, is unnatural, something ugly, fabricated by the powerful, and mobilised in their own interests, as I believe it was in Ukraine to give NATO and the EU a base on Russia’s border.  Even if you disagree with this analysis, the facts stand. And so what of Nationalism and its penchant for electing those who haven’t moved on from the infantile state of Omnipotence.  I put the cat Donald Winnicott among the pigeons here, His theory of the Parent-Infant-Relationship (1960) presents the thesis that happy citizens need competent managers in government not strong leaders with fucked up childhoods.

But in a progressive sense it’s the beating heart of the liberation struggle – think Vietnamese, Irish and Indians kicking out their colonisers.

Socialists are internationalists, but so are Neo-Liberals, the former in solidarity, the latter pushing for markets by any means necessary.  I quote that clever priest Giles Fraser.

The bastard conqueror is international finance that ignores borders, locates itself offshore to pay no tax, and has the EU in its pocket.’

Attachment to country settles our souls as infants, and, all being well, makes us happy and better placed to welcome others into it.   What sort of mother would consciously starve her children?’  A government that imposes austerity on a country can’t love it, unless doing the bidding of a higher authority.   Food for thought down among the food banks.

I reject bucolic backwardness  – narrowness of intercourse is narrowness of mind.  But we do need to re-define the nation as a progressive thing – as it had to be in WW2 – all social classes fighting fascism together, the working class using democracy to change the patrician order afterwards, and establishing a welfare state, of which I was a beneficiary.

The late Bob Crow spoke eloquently about how rail privatisation broke up and sold off an industry, weakening the power of the organised working class. I just picked up a leaflet at Cricklewood station (my train cancelled, so plenty of time to read it) calling for a return to public ownership of the railways.  I thought back to my teaching days, taking a group of kids to the National gallery. On turning a corner, to see Whistle Jacket – a fine chestnut horse rearing up.

They looked harder, in a different way.  I was an organiser of the Free for All museums campaign for the removal museum charges, so this was quite a moment.  Good luck Jeremy Corbyn, in re-nationalising the railways.

A nation is formed not only by its ruling class, but by its workers in tension with it.  This has nothing to do with the ill thought out, SPAD penned  ‘British values’ of Blair and Brown. Or the hilarious tests taken for British citizenship, ‘How many national parks are there in the UK?   The answers to which few British people know. Remember the romantic silliness of John Major’s old maids cycling through the mist to evensong?  Most politicians get this wrong, because their organic link is to their backers, often the corporations and banks, rather than their country.  There are exceptions of course – Nye Bevan’s Welfare State, Barbara Castle taming of the beasts of our motorways, Ken Livingstone’s Freedom Pass.

No good either sneering at people as populists, with the insulting meaning the media has given it.   When the Beatles topped the charts, back in the day, was that populist? No, it just meant that lots of people liked them. Are we afraid then of lots of people thinking the same thing?   Consider Jung’s collective consciousness, but remember that a strong welfare state is the antidote to fascistic politics.

I recently overheard a Danish woman describing parts of her country as an existential limbo, where things are going no-where for a whole lot of people in ‘bullshit jobs on low pay’.  But proud that her country can still provide lifelines for 1000s of refugees.  Ask them about the national question.

That so many Brits voted ‘off piste’ in the EU revealed how peessed off they were with neo-liberal politics.  Understanding the National Question has never been so important for true internationalism.  By god it has to be, at a time when religion is becoming powerful again.

The Irish poet Patrick Kavanagh, wrote in 1952 that…‘All great civilizations are built on parochialism…Parochialism is universal; it deals with the fundamentals.’

‘But only if you don’t fully grasp its meaning. Parochial literally means ‘of the parish’, denoting the small and the particular and the specific. It means knowing where you are. It can also mean insular and narrow-minded, but it doesn’t have to, any more than cosmopolitan has to mean snobbish and rootless.’

I read that on a plane to Delhi in 2015 – feeling the traveller’s excitement and nervousness of going somewhere far away for the first time, alone.  Seeing my country disappear in a patchwork of fields, ribbons of river dribbling into the ocean I’d never loved it so much.  If I’d been soldier looking back at those white cliffs, I’d be hallucinating blue birds too.

This negative meaning of parochial has attached itself to the word because contemporary globalised culture – neo liberalism – is resolutely anti-parochial. It sets out to destroy local particularity and our attachment to it, because if we remain attached to it we may not buy into the placeless nowhere civilisation that is being built around the globe in the name of money. At its best, a radical parochialism may be the most effective means of resisting this global machine… without a parochial culture, there can be no culture at all.  Guardian 13/3/15

This is both primal and sophisticated – and essential for art, so consider this

‘Most Irish peasants before the famine never moved beyond ten miles from home – a days walk there and back again.  This induces either stifling boredom and monotony or intimacy of outstanding depth.’

The art historian Andrew Graham-Dixon Art of Germany BBC4, explained how the beautiful carved wooden sculptures of Southern Germany depended on familiarity with the local lime wood tree.  A sculptor, about to demonstrate told AGD  ‘I am about to carve an idea.’  Something lost in the translation, for sure – but I was struck by it.  Should we be re-carving the idea of the National Question?  For a question can be an idea, if hewn from the right material.

View all posts by Jan →
This entry was posted on 6 February, 2021 in homepage. Bookmark the permalink.