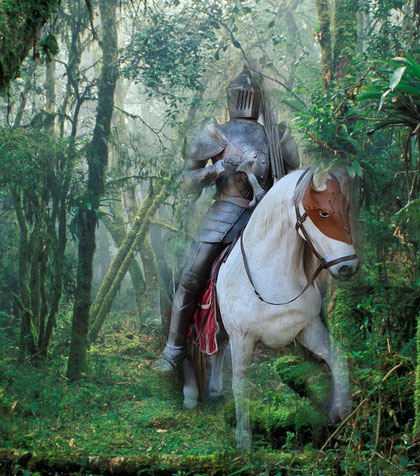 Overnight a sizeable area of dense woodland had appeared and it now blocked both carriageways of the motorway. The first driver to encounter it was on his way to deliver fuel at a nearby service station. The emergency services raced to the scene, diversions were put in place, and at first light government scientists arrived to take stock of the situation. The ecologists quickly agreed this was mature woodland with evidence of various protected species in residence and there was no way legally it could be removed.

While the group of officials were debating what to do, a knight on a white charger rode out of the wood accompanied by his page. He looked bemused at the scene on the carriageway, rode slowly around the vehicles parked there, prodded a squad car with his lance, and spoke to his page in an incomprehensible dialect which everyone assumed was Old English. A senior official questioned the knight but he appeared not to understand.

A literature professor was flown by helicopter to the scene in the hope he might be able to communicate with the knight, and perhaps shed some light on the origin of the wood. The professor turned out to be in his early 30s, with a second career as the bass player in an indie band called Grendel and his Mother.

As the professor approached, the knight removed his helmet and everyone recognized the Icelandic actor Gunnar Gunnarson. He apologized for pretending not to know English but said he had been wanting to meet a professor of Old English since he was four, and the present opportunity had seemed too good to miss. The professor, who happened to be a fan of Gunnarson’s, gave the actor a CD of his band’s latest album.

Gunnarson said they’d been filming the day before, a remake of a 1970s B-movie called Guinevere and the Hermit. A director known for his sexually provocative films had long wanted to ‘update’ this salacious tale . That night Gunnarson had dreamed of being lost among trees, in a scene very like one in the film, and when he woke up he found he was riding through a wood, accompanied by the actor playing his page, who also couldn’t remember how they had got there.

Tweet
This entry was posted on 20 August, 2022 in homepage and tagged Simon Collings. Bookmark the permalink.