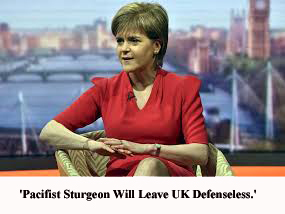 PM David Cameron has warned voters that if mad Scottish pacifist SNP candidate Nicola Sturgeon forms a coalition with the Labour party then UK military forces might as well be armed with water pistols. The PM’s allegations come after the SNP, whose manifesto includes scrapping a £100 billion Trident refit, surged ahead in the polls.

Mr Cameron put his hand across his face for added pathos and wailed alarmingly, ‘With the SNP in power we will be as defenseless as a naked newborn baby covered in petrol, nailed to a skateboard and speeding towards a burning crocodile’s mouth. It is only a matter of time before we are invaded by the bloodthirsty Belgians or even the Viking-like Swedes. That is to say nothing of the wars we have already started around the world which we fully intend to keep spreading… I mean fighting in the name of democracy of course, defense and staggering profits for my friends, family and party donors at BAE, their associated companies and other various merchants of death… I mean peace.’

Nicola Sturgeon explained, ‘These ridiculous rumours are pathetic scare tactics. Cutting Trident is merely prudent in times of austerity especially when the UK already possesses a fully functioning version of the system with enough fire power to melt the entire globe three times over.’

After quickly consulting with Tory head of smear, fear and muck-spreading Cameron came out with a fresh set of machine-guns, blazing, ‘If you don’t vote Tory this Scottish maniac will tear Scotland from the mainland leaving us even more vulnerable to deadly attack and after replacing our submarine fleet with broken ping pong bats (probably) she will sell us out to ISIS or the Reds or maybe even aliens. Yeah. That’s right: Aliens! Really, really scary, slimy ones… that suck your brains out… then eat you!’