Clean For The Queen: One Lucky Subject To Wipe Royal Arse With Tongue 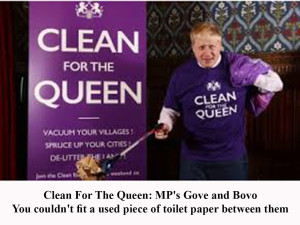 The ‘Clean For The Queen’ campaign continued to gather pace today when organisers announced that one lucky subject will be chosen to wipe Her Majesty’s arse – with their own tongue. The ‘winner’ will be the subject who Tweets the Queen the most fawningly sycophantic message on the campaign’s official website and bookies have tipped gurus of idiocy MP’s Micheal Gove and Boris Johnson as being ‘miles out on their own.
.
‘The witless Gove croaked like masturbating frog with erectile dysfunction during mating season, ‘Due to our cutbacks the Queens streets are filthy as we have laid off the people that clean them so everyone needs to do their bit. Especially me, as I want to impress the most popular woman in England, nay the world, with my abject unctuousness until it spurts out of me like frog’s spawn. All I have to do is workout this ‘Tweet’ thingamajig and I’m there.’

Boris Johnson – guffawing, privileged, fatso to his friends and enemies alike – guffawed, ‘Now, let’s not hear any complaining when I win this competition like I won the London Mayor-ship, the last election for the Conservatives, the next election for the Conservatives, the next Tory leadership race, a job for my sister at The Mail and one for my brother inside my own policy unit. Some of us old Etonians are just better than other old Etonians but that’s just life. Especially mine. Now, this Clean For Queen campaign. Right. Yes well, its like this you see… I think… of course… Ha. As everyone knows I’m pro-England, pro-the hierarchy, pro-establishment and pro our lovely Royal family – probably would have been one myself if dad had shagged some regal floozy – quiet at the back. Anyway, where was I? Yes. Well it’s all in the bag you see. I’ve already had my tongue cleaned by Dyno Rod and I’m ready to go into the Horn of Plenty on manual, as it were, and do my best for Old Blighty. Which, by the way, I’m also pro. All I have to do now is get one of my IT boffs to workout how to use this ‘Tweet’ thingamabob and I’m there. Did I mention I’m also pro me?’

Peter Pagnal from Newport Pagnell, an unemployed fireworks manufacturer and impoverished Royal ‘outsider’ who had never been to Buckingham Palace, or Eton, or Oxford, or the Houses of Westminster and was told to clean them pointed out, ‘You’re having a fucking giraffe! She doesn’t clean my street on my birthday. What a pair of shit stains. You couldn’t fit a piece of used toilet paper between them. Though you’d want to.  And I’d rather stick a sparkler up my arse than have Bovo’s tongue up there. Dyno Rod or not!’ 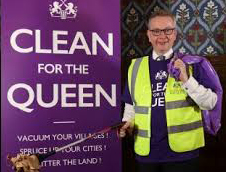 Clean for the Queen has a better ring to it than ‘Scrub the streets, peasant’
International Business Times UK‎ – 1 day ago

Michael Gove poses for the campaign … Clean for the Queenis the Big Society redux. And it …

View all posts by Ethan →
This entry was posted on 3 March, 2016 in homepage and tagged current affairs, Ethan Harrison, politics, satire, Social commentary. Bookmark the permalink.