David Bowie: The Cracked Actor Who Fell To Earth

Posted on 14 January, 2016 by Andrew Darlington 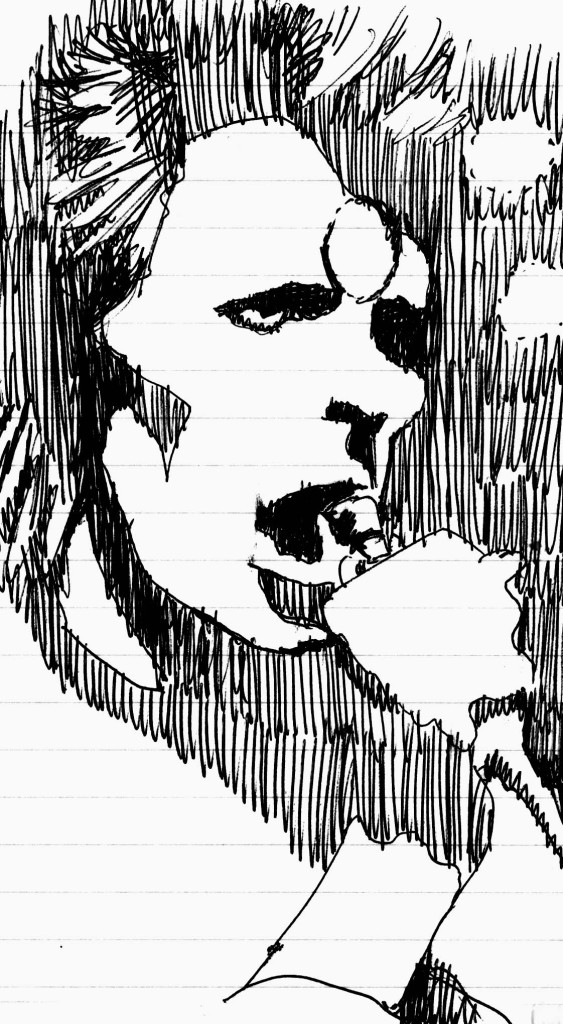 Bowie was never ‘my generation’. In another sense, he was exactly my generation. Nine months older than me, he’s one of those constant figures that threads your life, almost without you being aware of it. Never an influence, because we grew up through the same years, sharing the same formative fads. Check back to his ‘Pin Ups’ (1973) album for clues – Yardbirds, Pretty Things, Syd, the Who, yup they’re all there. Mod-sharp, he was one of a tribe waiting their turn beneath the roaring sixties pantheon, along with Reg Dwight, Rod Stewart, Marc Bolan, Noddy Holder, Alvin Stardust, Gary Glitter, all hustling failed derivate singles, gigging the right clubs, but never quite making waves. Impatiently aping Anthony Newley vocal mannerisms. Then a one-off hit with gimmick-stylophone lift-off, “Space Oddity” – fracturing the ‘2001: A Space Odyssesy’ shock-wave, yet he was unable to follow-up. Despite “Memory Of A Free Festival” tugging the hem of the counterculture gown.

But I always loved ‘Hunky Dory’ (1971), an album set with literate art-lyrics straining almost self-consciously to impress, flaunting references to Bob Dylan, Andy Warhol, Garbo, Neitzsche and the Hollywood Argyles (‘look at those cavemen go’). While lifting Beat-sleaze from the Velvet Underground for “Queen Bitch”, and Rick Wakeman for keyboards, it was hardly Bowie’s fault that “Oh You Pretty Things” got pulped into Bubblegum Pop by Peter Noone of Herman’s Hermits. Or that “Life On Mars” had to wait until post-Ziggy before it was recognized for its eerily wistful melancholia.

Watching Culture Club do “Starman” live in Sheffield, with Boy George eulogising onstage about how liberating it had been for him to see Bowie and the Spiders camping it up on ‘Top Of The Pops’, and you realize that yes – despite Jagger’s androgyny in ‘Performance’ (1970), I guess it must have been something like that for George O’Dowd and a whole host of other young closeted Gay men too. And even if you’re in on the Jean Genet joke and recognize the accelerating Bo Diddley guitar-riff from Shadows Of Knight’s “Oh Yeah”,  “Jean Genie” is still the perfect Glam-trash 45rpm single to spin frisbee-wise from the towerblock balcony. Harlan Ellison and Roger Zelazny’s ‘Damnation Alley’ (1967) might irradiate the zonked Sci-Fi imagery of ‘Diamond Dogs’ (1974), but by now who cares? Bowie is colliding multiverses into freak configurations, dancing the smithereens into choreographies of newness beyond the reach of tired old hipness, leaving your brother back at home with his Beatles and his Stones.

In the music press myself by then, interviewing all those thin white syth bands with Revox and drum machines, their sound and vision prostrating at the feet of Bowie’s chill Berlin trilogy, he’s like some cosmic deity to them, although “V-2 Schneider” tips a krafty wink at the seminal Kraftwerk. And I watch the video for “Ashes To Ashes” over and over again in mesmerised amazement (‘time and again I tell myself, I’ll stay clean tonight, but the little green wheels are following me, oh no, not again’). He’s there resurrecting Major Tom from terminal orbit, even as Steve Strange protests ownership of that requisitioned Pierrot costume. By ‘Scary Monsters’ (1980) – which I own in cassette format, he’s become his own continuum, augmented by Frippertronics for sure, and with Iggy for the sublime “China Girl”, but an origami of himself.

Backstage at the Leeds ‘Irish Centre’, Ian Hunter is stalking up and down in corkscrew hair and shades, ranting about “All The Young Dudes”. ‘Nobody can do that song’ he brags. ‘I’m the only one that can do it. BOWIE can’t even do it. Bowie did do it before he gave it to us, and even he can’t do it!’ Yet, with Mott the Hoople moribund after three failed albums, it was Bowie’s inspired patronage that turns them around, gives them a classic hit single, and a career. Bowie also rescued Lou Reed and Iggy Pop from neglect, relaunching their trajectories with ‘Transformer’ (1972) and ‘The Idiot’ (1977) respectively. And who can forget Lulu’s shot at lesbian-chic with “The Man Who Sold The World”, taking Bowie’s song to no.3 in 1974?

This isn’t a reasoned critique. More a numb thumbed-in first reaction. Bowie was perfectly cast in Nicolas Roeg’s ‘The Man Who Fell To Earth’ (1976) as Thomas Jerome Newton because he gives every impression of playing himself. He is the stranded alien, out-of-sync in a strange world, jackdawing bits of thefted tech into new gadgets and nifty geejaws. He is a human veneer, with conjectural depth. In Alan Yentob’s ‘Cracked Actor’ (1975) he’s in the backseat of a limousine, explaining Brion Gysin and William S Burroughs’ theory of cut-up composition, always crashing that same art-cult car.

Yet he’s one of those constant figures that threads your life almost without you being aware of it. Just nine months older than me, too, which is even more unsettling.

View all posts by Andrew →
This entry was posted on 14 January, 2016 in homepage and tagged AC Evans, Andrew Darlington, David Bowie. Bookmark the permalink.