I just got this email from my Pal Putin which is a reply to an email I sent asking him to clarify the Ukraine situation …thought it might interest you. 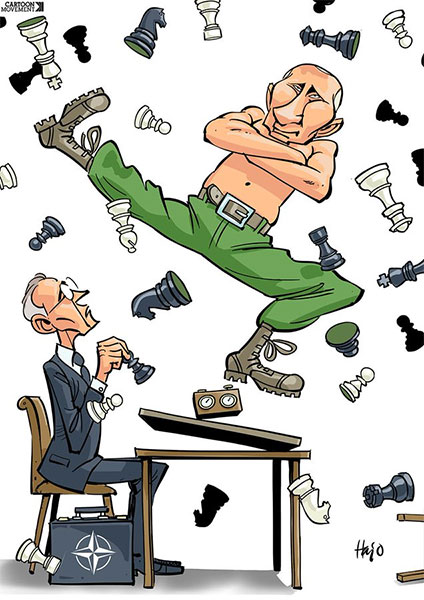 Thankyou for your email relating to the current situation in Ukraine, I am happy to clarify our position as clearly it is being misrepresented in the Capitalist media.

Let us get some historical facts clear. When Russia was known as the USSR the whole of the rest of the world spent billions on goading, mocking and eventually destroying us. You in Europe, under instruction from your puppet-masters in the USA, erected nuclear missiles to halt us from building communal farms and factories, to drain away our resources… you cut off access to essential world-resources and employed sanctions with the deliberate intent of starving the Russian people (these same people who had fought at your side to defeat Hitler)…  and you broadcast lies about us and surrounded the whole of the borders of the USSR with nuclear weapons.

We don’t forget this.

Like a schoolboy bully you pushed us around and lied about us until we were broken and laying at your feet …but because you were/are bullies that wasn’t enough for you; even when you had cowed the Russian people into abandoning their peaceful socialist experiment you now began to worry that we might use the nuclear weapons, (which you had forced us to create), against you. Being bullies, with bullies’ minds, you thought that now we in Russia are strong and can fight back, we in our turn would hurt you. So even though we had capitulated, even though we had abandoned the greatest peaceful experiment ever undertaken on this planet, you kept adding to the nuclear ring you threatened us with and your propaganda machines still churned out lie after lie about us, until, despite the fact that we are the largest country in the world by far, and despite the fact that we have now more nuclear weapons than the rest of the world put together, (though unlike YOU  and your ‘experiments’ on civilians in Hiroshima and Nagasaki, we have NEVER used them) you prod and bait the Russian bear and, because we educate our people fully, they/we know WHY you do it.

Over 60 years ago the puppet-masters in the USA created the greatest weapon ever envisaged which was designed to goad the citizens of our Russian State even more, the North  Atlantic  Treaty  Organisation, and you invited every country in the world to join this organisation, or at least ‘selective’ countries, you centred on the ones in Europe oddly enough and favoured those who had borders with Russia. (Russia itself though was never asked to join, nor was China or Cuba; which somehow betrays the REAL purpose of NATO surely?) The USA was/is the puppet-master for NATO; its sole aim is to continue to goad the Russian bear, to attempt to provoke another world war in Europe with all the puppet states of NATO attacking Russia while the USA sits safely back and makes billions of dollars selling arms to Europe in the same way as they sold arms to Britain and all the allied countries during WW2.

NATO has no other purpose.

THAT is how the world came to be where it is now; you/the-USA, talk of the current ‘war’ in Ukraine but you in the west, who are simply puppets of the USA, (which incidentally has attacked and bombed and massacred people in over 60 countries and it has conducted genocide in the USA itself by all but wiping-out the native-American peoples.) have been waging ‘war’ upon any country, including Russia, that ‘steps out of line’ or which appears to be getting as ‘strong’ as America. You, European servile puppets, wage war against us by continuing to line up American nuclear weapons on American bases in every single border country surrounding Russia and you pour out lies and propaganda about us 24/7…

THIS is how you cowardly people conduct YOUR wars now…

But surely you know that there is/are only so many pokes from your cruelly barbed stick that the bear can take before s/he unfurls claws and retaliates? Of course you know it; because war, real war expending human-life and property, is what your corrupt and crumbling System requires. As Marx told us; to maintain the consumption of surplus values and to ensure Capitalism thrives the wars must be continuous… THAT is why the USA is continuously at war and has been every day since its conception.

And so, to the point of the current Russian temporary occupation of Ukraine.

Ukraine was a part of our socialist experiment, you starved the people there, Russian people, in the midst of their experiment… and because of YOUR actions over four million innocents starved to death and ALL Russian peoples went hungry, listened to your propaganda, suffered hardship and deprivation. Then you infiltrated and installed puppets to run the government in Ukraine under the guise of your version of ‘democracy’; installed an ex-comedian who has himself been reprimanded by the Ukrainian people for salting loot away in off-shore countries under his wife’s name, something which even your own corrupt media can’t conceal… and NOW you invite this new country you have created and nurtured to join the forces already surrounding Russia and you bribe them with filthy lucre and promises of ‘wealth’ but never tell them how Capitalist wealth is created. We in Russia accepted the decision by Ukraine when it chose to be an ‘independent’ country even though hundreds of thousands of people within that great country have been waging a revolution for close to ten years, a revolution whose aim is to unite Ukraine again with Russia, a revolution that YOU in your alleged ‘free world’ eliminate from your history books. So we, the peoples of Russia, have said ‘enough’. We have drawn a line in the sand. We have said (as millions of Trades Unionists, liberals, socialists and free-thinkers world-wide have said repeatedly since it was created), we say ‘NO to NATO’. For we see through your creeping evil and we know enough of Marx and History to see precisely what your end-game is… and your end game is WAR. War in Europe preferably, well away from the USA. Our temporary occupation of Ukraine has but ONE purpose which your lying propaganda machines ignore totally, we have the aim of preventing yet another row of nuclear missiles being erected on USA armed-forces bases that are aimed at our beloved country. OUR aim is diametrically opposed to the aims of the European puppets of the USA, it is to PREVENT war in Europe on the scale that the USA longs for.

To answer your specific question more fully Alan… perhaps more specifically, more honestly, more accurately, I will expand and say this; tell the USA and Europe to STOP threatening us. STOP bullying us. STOP your aim of world-capitulation to the USA. STOP your propaganda war in the media. STOP peddling the notion that war must be continuous. IF you don’t then note this; we have drawn a line, we have said

‘this far and no further’

…take note for our nuclear weapons now can reach the Americas and if you goad and goad and goad then you will reap the consequences.

I hope this explains the situation more clearly for you…

Your Comrade in arms

Tweet
This entry was posted on 12 March, 2022 in homepage and tagged Alan Corkish, Hajo. Bookmark the permalink.