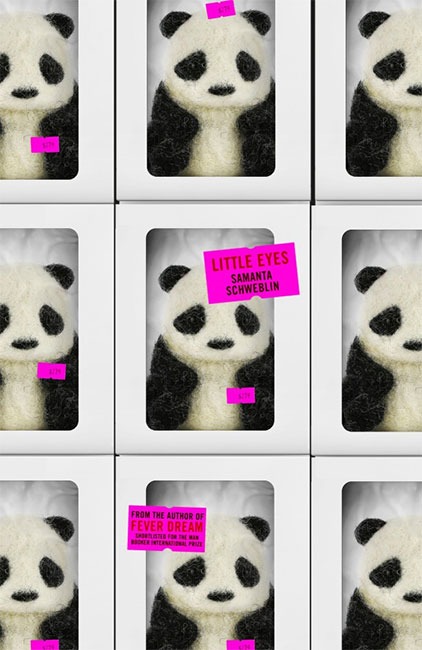 It’s hard to know what to write about this. It’s not very often that I read a book and then think ‘I just wasted two hours of my life on this’, but Little Eyes certainly had this effect on me. So, it’s hard to know why this has been longlisted for the Booker International, received such critical acclaim or indeed, even been published. It is clunky, obvious and unoriginal. It simply re-presents what is going on in social media all around us.

So, in this novel it’s like this: the new craze is kentukis, mobile toys with cameras for eyes that can be adopted as pets. Or you can become someone who gets assigned to a kentuki to control and monitor. They need recharging and if they’re not, or they accidentally or deliberately meet their demise well, that’s it, end of.

So we have those who open up their lives to anonymous voyeurs and those who choose to be an anonymous voyeur. Except of course it isn’t that simple, people find ways to have conversations, contact the anonymous person controlling your toy, sell on assigned rather than random connections, adapt the toys, liberate the toys, even make art with the toys.

Told in brisk workmanlike prose, we meet a variety of characters in a variety of situations interacting in the above and other ways with their kentuki and their controllers. The book opens with a gratuitous scene of three girls raising theirs shirts and flashing their teenage breasts at their new toy, then arguing as the toy reveals it has ‘other information’ about them and what they say about each other behind their backs.

Other kentukis are controlled by paedophiles, perverts, innocents, the lonely and obsessed. All gradually get caught up in digital tangles of control, confession, power and information; none of it is very exciting, original or interesting. The best bit for me is that many people gradually wake up to what’s going on and many kentukis meet their demise: drowned, buried alive or switched off.

Yes, this mirrors the digital world that many people choose to engage with, but inventing a new toy as part of it (which is basically a webcam with cuteness attached) doesn’t seem particularly clever or profound. Neither is the book ‘haunting’ , ‘horrific’ or ‘out there’; it is mundane, throwaway and obvious. This is digital and social theory lite, as obvious and predictable as you can get.

View all posts by Rupert →
This entry was posted on 21 March, 2020 in homepage and tagged Little Eyes, Rupert Loydell, Samanta Schweblin. Bookmark the permalink.