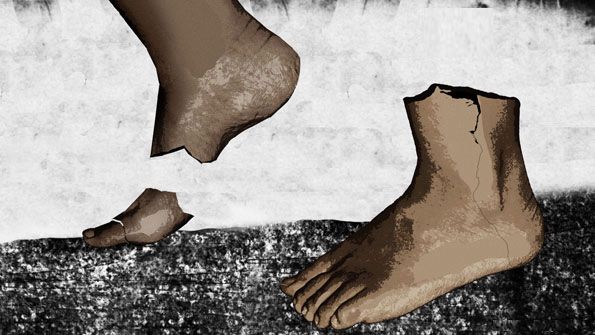 That morning His Majesty discovered he had feet of clay. In normal circumstances he never looked down, but the evident concern on the face of his old and trusted valet caused him to lower his gaze, and there at the ends of his legs were a pair of feet sculpted from clay. The feet had been expertly modelled, and with an extraordinary attention to detail. His Majesty admired the artistry which had gone into fashioning the toes, the heel of the foot, the slender ankles. Apart from the dusty grey colour they might have been mistaken for actual feet.

The royal apothecary was summoned and was astonished when he saw them. ‘A most unusual condition,’ he remarked. ‘Most unusual indeed. We must ensure the feet are neither too wet nor allowed to dry out. They must be wrapped in muslin sprinkled with the purest glacial melt waters. For rainy days I recommend galoshes.’

The elaborate ministrations occasioned by the clay feet were an inconvenience. His Majesty had important issues of public policy to adjudicate that morning and the necessity of having his feet bound in damp cloth irked him. ‘Bring me the papers for today’s debate,’ he said to his secretary. ‘I can at least read them while my feet are being attended to.’

Experts claimed the kingdom was facing an existential threat as a result of its growing prosperity. The Excess Party denied this, maintainting there was no crisis and that everyone should carry on guzzling and gorging themselves as usual. The Compromise Party, for their part, had worked out a plan which allowed for a reasonable level of continuing overconsumption while mitigating the worst of the effects. A celebrity chef who supported the Compromise Party at one point claimed to have devised a cake which regenerated itself provided it was consumed with moderation. This was later exposed as a hoax.

These were the important issues of state upon which His Majesty was expected to pronounce. He looked through the file of documents while his feet were gently moistened, then bandaged. Once these precautions were complete the servants discovered his shoes would no longer fit. ‘I can’t attend this important debate looking like this,’ he shouted. ‘Find me some large-sized boots, or my dignity will be compromised.’ Fortunately, His Majesty had slender feet and a suitable pair of cavalry boots was soon obtained.

The arguments between the contending factions raged all morning, on through the afternoon and into the evening. Around midday the rotund leader of the Excess Party had to be carried from the chamber amid rumours he had had a heart attack, though his colleagues claimed he was suffering from ‘mild dyspepsia’. As the evening wore on a power cut plunged the chamber into darkness and the final few hours of rancorous exchanges took place by candlelight. The debate ended in an agreement to reconvene the following week.

His Majesty had experienced considerable discomfort in his legs during the final hours of the discussions, making it difficult to focus on the pros and cons of the arguments, but he had remained dutifully in his place. He had to be assisted as he walked slowly from the chamber, the dim candlelight helping to obscure the extent of his difficulties. Back in his private rooms his boots were removed and his feet carefully unwrapped. The finely sculpted feet were perfectly preserved, but the shins and calves of both legs had now also turned to clay. The royal apothecary was alarmed. ‘I fear we may have to amputate,’ he said.

Tweet
This entry was posted on 2 July, 2022 in homepage and tagged Simon Collings. Bookmark the permalink.