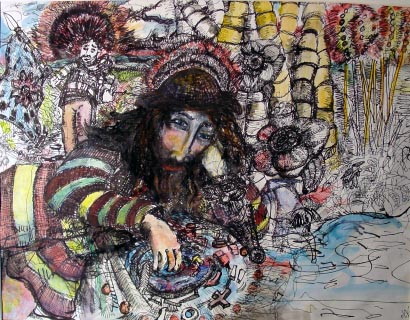 It takes many years of sophisticated political development to arrive at a civilised democracy such as the one we purport to inhabit. At one time the ‘London mob’ was a ravenous beast which governments invoked at their peril; else would they find their grand houses burned to the ground with not an unbroken window for miles around.

Nowadays however, channelled and coerced into the soporific delights of consumerism, where every mirage and desire is obtainable to even the least privileged, demonstrations on this scale, should they occur are easily quelled, since being a democracy protest is perfectly permissible, given that the police are informed of the where and when, thus allowing them time to prepare for some hands-on experience in the use of the baton.

The police, who have arrived in vans and coaches, mill about talking amongst themselves while they await their orders and the beginning of some action. Amongst the rank-and-file are a dozen or more officers of the riot control variety; they stand a little apart from their less fearsome fellows, as if they wish to preserve their special form of ghastliness from contamination by their not so overtly aggressive colleagues.

Despite such a show of strength all remains peaceful until, far down the road but advancing steadily nearer come the NORTH LONDON CONSUMER’S ASSOCIATION, bent on disturbing the peace with their protest.

A senior Inspector raises his hand and a sergeant issues the word of command. Instantly, with military precision the police officers adopt their prearranged positions. A double line of constables stretches across the road from pavement-to-pavement, while the riot squad crouch, grim-faced behind their shields, and like Caesar’s armoured legions await the order which will unleash them upon these unruly dissidents.

The protest now comes into view. They appear however, to be quite ordinary people ─ decent middle class housewives for the most part with a few sober looking men who might be minor clerks or off-duty postmen and such like. But they advance purposefully towards the police chanting their demands with a loud and unified voice:

‘We want what we want and we want it now!’

‘We want what we want and we want it NOW!’

The riot police at the front, who will receive the brunt of the first assault are getting excited; licking their lips and giving their batons an anticipatory swing or two to loosen up; most have never participated in a proper baton charge and are hoping that today will provide an opportunity to engage with the enemy in such a finely coordinated manoeuvre. While on the other hand the protester appear to have no weapons at all, apart from an odd walking-stick or two wielded by old-aged pensioners.

All looks set for blood on the streets with mayhem to follow, when from far back behind the police comes a loud wailing of voices. The police look doubtful for a moment and glance nervously over their shoulders. What they see advancing up the road behind them causes some consternation among the ranks, while their superiors speak anxiously into their radios. For filling the road from side-to-side behind them come the massed ranks of the WEST WILLESDEN BUDDHIST SOCIETY.

Having been provoked by the subversion of truth recently displayed by the organised religions, and the subsequent destruction and suffering that this entails, they have now taken to the streets in vast numbers to put a stop to it.

‘Christians, Jews, and Muslims out!’

‘Christians, Jews, and Muslims OUT!’

The Buddhists chant ever louder as they approach the rear of the police, who are now reordering their ranks to defend themselves on two fronts.

‘We want what we want and we want it NOW!’ Chant the consumers who, catching sight of the Buddhists now come to a silent halt.

‘What is it we want?’ asks one of the consumers of another.

The man turns to a nearby steward.

The steward looks at him patronisingly.

But the steward has moved off. The question however, has been heard by many of those nearest him and they all set to asking each other. ‘What is it we want?’ No answers are forthcoming and many arguments arise. As a result of this general confusion the cohesion of the protest soon weakens and those on the fringes begin to disperse.

The Buddhists meanwhile are suddenly realising that their enlightening view will not gather many converts from amongst the armour-clad ranks of the riot-police. Ceasing their anti-religious chants and passively acknowledging this fact, they place their palms together and give little bows towards the constabulary before departing. The police regard these peaceful gestures with stony-faced silence, and reluctantly the order is given to stand down. They look disappointed now that they have only each other to bash, which of course they can do any time, and returning to their coaches with a disgruntled air, they too go home.