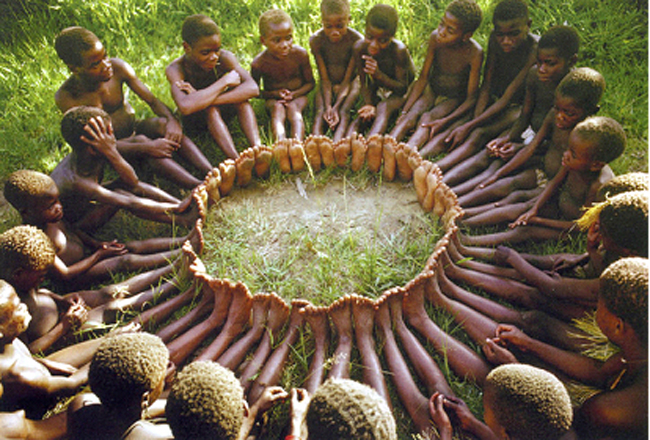 An anthropologist tells a story

Of how he proposed a game

To children in an African village;

He places a fruit basket underneath a tree,

Then tells the children the first to reach it

Will be classed as the winner and can have it all,

But as soon as he calls out “Run!”

The children look at each other, then all grasp

Each other’s hands and run forward

All together, and then they all run back with the basket

And then they all sit down to enjoy it.

When the anthropologist asked them

Instead of their letting a winner take all

And have all the fruit for himself,

“If all the others are sad?”

And the word Ubuntu translates:

Or, being selfish makes no sense.

But its spirit’s forgotten if people are programmed

By money and competitive tyranny

To believe that the world is more efficiently run

Arms are exported to Africa to allow corporate power

To elbow its rivals for resources to one side:

Rivals for oil; for diamonds; for gold and for coltan,

But none of them can be as good for you as fruit.

View all posts by Heathcote →
This entry was posted on 15 November, 2012 in homepage. Bookmark the permalink.