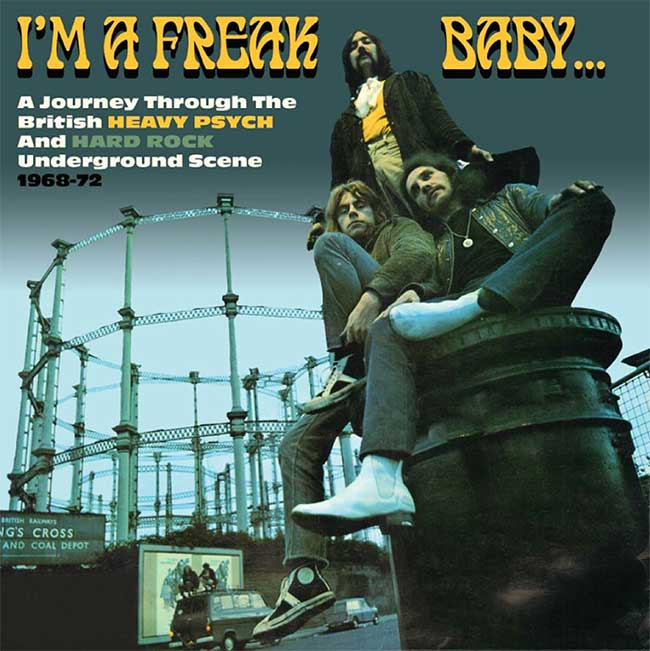 If you’re like me – 60+, still a Freak [I prefer Hippie], headbang-matured, think the 80s was musically wasted, like-it-loud not because the hearing is going – then you are in for a riff-rich treat with this selection full of the well-known and, for me anyway, more esoteric from the ‘late Sixties/early Seventies nascent hard rock/proto-metal scene’.

So does this preclude novices, of any age? Yes, if you want panoramic ambient washes, rapping or remix electronica. Otherwise, anyone can jump on the riffwagon.

There’s no surprise you won’t have heard many of these tracks – not just because previously unreleased – but because they didn’t make whatever cuts, were demos [e.g. Arthur Brown’s Fire on Disc Three], didn’t get airplay even in Clive U’s bedsit, or you were too stoned to discern when first heard let alone remember now. Or just not all that original.

Though ‘original’ in this context is a stupid term. These are firmly of their time and riff-rooted to this incipient genre, and within any singular as-we-listen-now overly generic track there are highlights, like Chocolate Piano by Orang-Utan with wonderful dual guitar work including wah-wah, pounding bass, and a vocalist who can growl with the best [and a descending riff that slows before the big build: cliché fulfilment of the heaviest kind. Yes, it does criss-cross the speakers in stereo – I read someone ridiculing this recently. Philistine]. The blackness of Sabbath is draped across many of these, like Iron Claw’s pulsating Clawstrophobia, and that’s a fine heavy cloth to weigh things down to basic heavy-rock costumery. Plastic Man by Bodkin wears this well in its riff-embroidery, but includes that other rock requisite in the god of Hammond, and those proto-earnest lyrics like illusions that fill your mind / realities so hard to find.

There are occasional relative complexities in songcraft [but don’t let that put you off] as with the more pop-psyche workings of Let’s All Watch the Sky Fall Down by Andromeda, and as much as I love the distortions of playing many of these raw tracks extremely loud – some recordings are quite basic, like Stack Waddy’s Rosalyn; quite rough too like The Rats’ Early in Spring on Disc Three – this kind of comparative refinement breaks up the sniffing table. So when this is followed with Mother Grease the Cat by Ancient Grease, its merging of road-build riffing and architecturally considered melody we have an engaging coalescence of the metal and the prog. 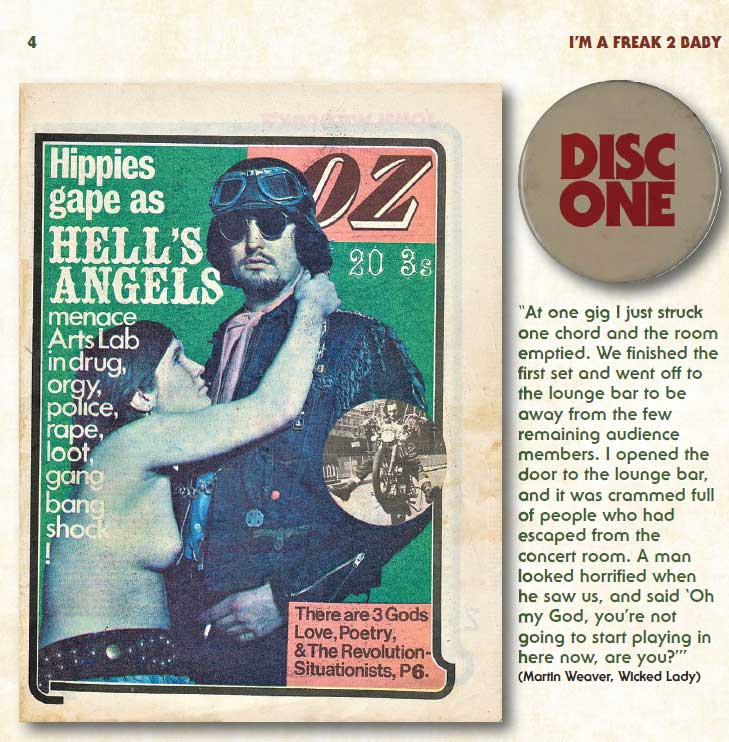 And this is almost exclusively from Disc One. But the other two are pretty much the same. Tautology or tautology? And I’m not going to delve into the band histories and lineages and all that other interesting stuff because it’s in the excellent 40 page booklet that comes with the complete package, like telling us how Natural Gas as formerly Strawberry Jam once won the TV talent show Opportunity Knocks, or that Paul Kossoff and Simon Kirke of Free were once in an early line-up of Leaf Hound.

I will mention that Love Sculpture’s Sabre Dance is on Disc One. An actual hit. I’ll also mention the Jeff Beck Shape of Things with Rod Stewart on vocal. There are some miserable people out there who like to dismiss the Rod of R&B and genuine Rock a la Faces and I think that is Ridiculous. Yes, his latest is pretty dreadful, and performing live on Strictly is Freak-naff, but pre Sir Roderick is on this track at his glorious best, gravelesquely sublime in riding Beck’s many guitar soundscapes.

What this second Grapefruit Freak collection isn’t for most of us is a nostalgic flashback of music that prompts immediate memories or even purple and hazy ones because these bands and their music were not generally responsible for the songs/albums widely popular and played at the time – unless you were well travelled to gigs, especially in the London area as the booklet tells us [and I don’t recall many of these being festival regulars], into the ‘counter-culture’/music magazines of then like International Times and Oz, including regional variants, or in the industry itself. Many of these bands/albums gained their popularity in the more recent nostalgia industry for people of my age, so newly discovered and/or re-packaged for those of us who didn’t know about these depths – musically and more importantly geographically – at the original time. Tweet
This entry was posted on 8 December, 2018 in homepage and tagged A Further Journey Through The British HEAVY PSYCH and HARD ROCK Underground Scene 1968-73, Grapefruit Records, I’m a Freak Baby 2, Mike Ferguson. Bookmark the permalink.