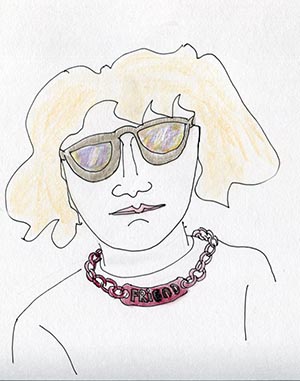 Friendship: Probably the last remaining uncommercialised opportunity for heartfelt relationship in these superficial times; social media networks aside and not included, since it is doubtful if any would lay down their life for such facsimile contacts. However, even those of the genuine variety can sometimes, when under pressure, prove somewhat fickle.

‘A friend is one with whom one can safely put one’s foot in it. (Otherwise, it’s down the tubes for you mate’.)

An afternoon stroll is the kind of exercise that Smith delights in and frequently during the high days of summer he indulges himself in this pleasure. On a particular day he is thus engaged and progressing at his usual strolling rate of around one mile per hour. This pace he finds the most relaxing of all, although requiring at times a great deal of patience since if there is an objective it may take quite some time before it is attained.

Today however there is no such thing to be accomplished, he merely has to ensure that movement is taking place and he looks down to assure himself that it is. The pavement seems to be passing beneath his feet in a satisfactory manner and should it continue to do so he will, after some time, find himself in a different place entirely.

Now he looks around to discover if there be some item of interest on which he might speculate, and at once his eye alights upon a particularly delectable lady who is sashaying towards him. He is not wearing the spectacles which he sometimes uses to recognise who is speaking to him, and therefore he has only a vague impression of the girl’s face, but he can distinguish that her eyes, even from a little distance, are flashing in a most provocative manner. Closer she comes until the details of her features are suddenly clear to him. He panics.
‘Oh! NO!’ he thinks.

It is Gloria. And it is far too late to pretend he hasn’t seen her. He cannot escape and consigns himself to all the mayhem which is sure to follow. Gloria, although delectable to a high degree, also has a bite that is fatal. She now beams prettily upon Smith and her “Hallo” is sunny as can be. Smith does his best, and in spite of his extreme wariness manages to get some sort of a smile together.

‘I’m so glad to bump into you,’ she says. ‘I need a bit of help with something.’
Smith knows already that he doesn’t want to know but…
‘I’m a bit busy at the moment,’ he ventures.
Gloria allows a small frown to show on her perfect brow, a signal to inform Smith that he is now sailing in very dangerous waters indeed.
‘Come and have a cup of tea while I explain,’ says Gloria, ‘I only live just around the corner.
Smith doesn’t try to wriggle out of this, after all, he can still say no and he decides to go along quietly.
‘OK,’ he says.

Gloria prattles away as they continue to walk, she tells Smith all about the MI5 surveillance which she has to endure and the dodgy vans with wireless masts parked forever on the street opposite her house. Smith listens in silence; he’d like to get this interview over as soon as possible and doesn’t want to encourage her.  She opens the door to her flat with several keys; the door is studded with as many padlocks as a medieval chastity belt, but finally she pushes open the door and ushers Smith inside.

He sits upon a couch and her voice comes from the kitchen
‘I’ve put the kettle on, make yourself comfortable while I just change my clothes.’
Smith is not at all happy with the way this is going.
‘If only I’d been wearing my glasses,’ he thinks. He could have crossed the road, or better still crossed his eyes and pretended to be somebody else. Gloria’s voice comes from the next room.
‘Come in here,’ she calls. ‘I’ve made the tea.’

Smith enters the room to find the tea set out on a small table, while Gloria, now dressed in pink see-through silk pyjamas stretches provocatively on a large double bed. Around her shoulders a wide and voluminous swath of fine white muslin cascades across the bed either side of her. She leans forward and pats the bottom of the bed suggestively as if inviting Smith to succumb a little more to her allure. Smith holds his ground, he will need all his strength to resist her proposition ─ whatever it is. Gloria pouts, ‘It’s very simple,’ she says, slightly petulant at his stubbornness, ‘I just want you to write and sign a letter for me.’

‘Who’s the letter to?’ asks Smith.
‘The Queen,’ says Gloria, her eyes widely innocent, as if she has merely asked him to mend her washing-up brush. Smith is not surprised at the request; he has had dealings with Gloria before and knows that her mind has many mansions indeed; some of them in fact quite scary.
‘What do you want the letter to say?’ he asks, committed now to this perverse display of caprice.
‘I want you to say that you have seen MI5 officers stalking me; and also that you suspect that they are in touch with aliens.’

Smith now has trouble keeping a straight face and Gloria is quick to notice.
‘They are, they are,’ she shrieks. ‘You should see how weird the wireless-van men are.
This is too much for Smith who can no longer disguise his amusement.
‘I’m sorry,’ he says, now openly grinning. ‘Writing to the Queen is not my thing, and anyway I don’t think she’d be interested in aliens.’

Gloria takes extreme umbrage at this and her eyes flash dangerously beneath darkening brow. Then, gathering the chiffon about her in a billowing cloud, her lascivious silk-clad form disappears like a swan into the mist, and Smith is left with only her sharp and contemptuous voice.

‘You’re just like the rest of them,’ she snarls. ‘All I need is a bit of support.’ And the waspish voice pursues his exit remorselessly.

‘You rotten stinking filthy pinko luddite bastard. What kind of friend are you?’

View all posts by David →
This entry was posted on 18 December, 2013 in homepage and tagged dave tomlin, demands of friends, followed by spooks, friends, modern writing, nick victor, Paranoia. Bookmark the permalink.