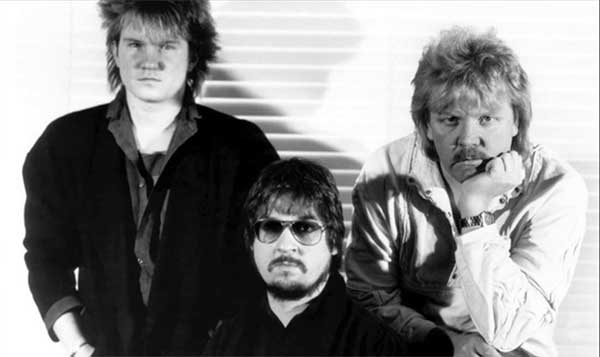 Tangerine Dream, hailing from Berlin, have gained a renown as probably the most significant electronic music group since the late ‘60s, and if they were new and strange then they have stayed the course by now long enough to have very considerable name recognition. Their heyday has assuredly past, which is not to suggest they might not find a resurgence and revitalisation under new members of the band.

Tangerine Dream’s long history can be traced out in a number of stages, from the originary ‘Pink Years’ 1970-73 (though they were founded 1967), including Zeit, to probably their high point the ‘Virgin Years’ 1974-83, when that label itself was but a fledgling, to the ‘Blue Years’ 1984-88 and on. It might seem surprising in retrospect that some of these Virgin albums were commercial hits. Phaedra, the first, recorded at The Manor went gold and sold in the 6 figures, Rubycon which followed was their highest charting album, before Stratosfear, which is regarded as more melodic, reached silver status. Cyclone was rather more controversial, has been seen as much maligned, perhaps a turn to progressive rock and sold less well. Tangerine Dream turning more mainstream has been associated with a number of movie soundtracks beginning with Sorcerer (77) and including Ridley Scott’s Legend. Hyperborea in 1983 was the last Virgin album, charting briefly, with personnel of founder Edgar Froese, Christopher Franke and Johannes Schmoelling, Schmoelling having replaced Peter Baumann, who went solo in 1977. Franke is credited with having introduced the use of electronic sequencers. Froese (d2015), the only continuous member, did the striking and atmospheric cover art for Phaedra and Cyclone. Paul Haslinger replaced Schmoelling for Tyger and Underwater Sunlight.

The ‘Blue Years’, so called because of original label Jive’s blue logo, included four studio albums and two live albums. We now find these studio releases remastered and reissued in replica card sleeves, with a poster, by the Reactive [/Esoteric] label.

From the 1990s Tan Dream were noted for departing in places from new age or ambient stylisation toward more pop oriented electronica (eg Prodigy, Chemical Brothers), releasing on their own independent label from ’96. There is currently a gap of any material on Spotify from 1992 to 2004, though there have been a number of retrospective anthologies including a 2 part ‘Ride on the Ray’ (2011) for the Blue Years on Esoteric Recordings for streaming/mp3 only.

Le Parc perhaps not surprisingly relates to a number of parks and outdoor spaces around the world, though the title track, produced by Franke, was used for the TV series Street Hawk, featuring an all-terrain attack motorcycle capable of 300 mile/hr speeds driven by superhero Street Hawk (Jesse Mach, played by Rex Smith).

Unusually for Tan Dream none of the 9 tracks on Le Parc exceeds 7 minutes. Among the thematicised parks are Yellowstone and Central Park, a  Zen Garden, the Tiergarten (Berlin’s inner city animal park, official video on YouTube with archival photography), Bois de Boulogne and The Cliffs of Sydney. The flavour of the music is mostly outward looking, of the character or modus of public spaces, spacious, relaxed and expansive, populated. Two tracks have wordless, atmospheric female vocals, Yellowstone and Zen Garden, these add very considerably to a kind of stand out ethereal mood here. Not quite playlist material but striking and subtly enjoyable.

Underwater Sunlight makes for some changes of approach. There is one really long track, about 19 minutes, ‘Song of the Whale’, and the musical mix includes electric guitar from Haslinger and Froese and Haslinger on piano. Haslinger has a classical background, which tells somewhat here. Each of the tracks on this album has a watery theme, from ‘Ride on the Ray’ to ‘Underwater Twilight’. However, the mood is bright, airy, brisk rather than moody. Yet one can’t but quite be aware that Tan Dream

by this stage have largely departed from introspection, there are suggestive comparisons with the frequently oceanic music of eg Steve Roach which is mostly well removed from what transpires, perhaps more superficially, here.

Tyger (87) marks another departure, and was Franke’s last album, going on to found the Sonic Images music label. Tyger derives from William Blake, including a 14 minute track ‘London’ (in ‘Songs of Experience’), after Blake’s poem and ‘Smile’. There are also female lyric vocals by Jocelyn Smith. Generally speaking this seems to have been more or less well received. Along with the earlier Cyclone, however, this is a Tan Dream album featuring vocals which did not go down well with discerningly instrumental or electronic purists. ‘21st Century Common Man’ is a long 9 minute track which is briskly melodic without reaching deep.

Green Desert (title track 19 mins, with a Froese guitar solo) is odd man out here, being a 1973 album resurrected by Froese, and is stylistically quite different from the three other albums here, being originally recorded as it was between Atem and Phaedra. Froese’s guitar playing is capable rather than virtuosic, and it does lend to the atmospheric mood of the piece, not unlike, say, early instrumental Pink Floyd, without being any advance. There is here, for instance, nothing that looks to seriously challenge, rather than supplement, Phaedra.

These albums are in the end more for the Tan Dream aficionado or completist, rather than someone looking for signs of the very best, in which case it must still be the Virgin Years.  I think these are decidedly transitional style Tan Dream excursions, where they have in so many ways ceased being electronic pioneers but are faced with how to integrate the electronic into other styles of music, and what are they to be, well not greatly introspective one might observe, for one. In terms of pop synthesisers more might have been done by, say, Depeche Mode, OMD, New Order, Sparks or Blancmange. Indeed now the prevalent mood seems to be as much for guitar and live music (acts as diverse as Ed Sheeran, Elbow, Mumford and Sons etc) rather than synths. But the synthesiser has enormous potential as we know from Switched On Bach and other pioneers, like Tomita and Jean Michel Jarre, and still seems, as for Tangerine Dream an area still to be explored, from the Private Music exploratory phase of the subsequent ‘Melrose’ years, and on.