How Dylan Gets His Job Done 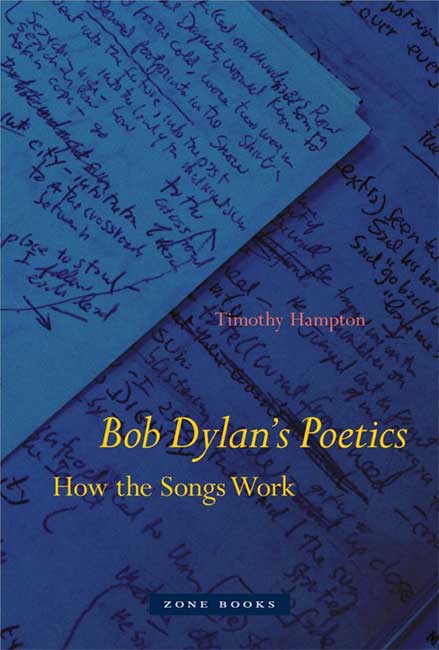 Of books about Bob Dylan, there is no end. They have changed in nature, however: biographical tomes such as Michael Gray’s Song and Dance Man and Robert Shelton’s No Direction Home have given way to detailed exegetical analyses of specific parts of Dylan’s discography (Clinton Heylin on the Basement Tapes, for instance) and now, with the added cachet that comes along with being awarded the Nobel Prize for Literature, come the academic studies. Timothy Hampton’s book, however, is of genuine interest.

Hampton’s approach, as his title suggests, is to focus on Dylan’s ‘Poetics’, that is, how he is situated in relation to his songs, as his career progresses. If you buy this book seeking biographical revelations or exhaustive trawls through bootlegs, you will be disappointed. It is a fairly literary study, but not dry, and as a long-standing admirer of Dylan, I was genuinely enlightened by many of Hampton’s carefully developed ideas.

He begins by defining carefully his focus: ‘the intersection of lyric, music and performance’ and how Dylan’s songs work. Because of Dylan’s stature, this means taking on American history, nuances of folk and blues genres and working through a cache of songs already encrusted with familiarity and importance. Hampton is up to this, however. He sets out (with some judicious aid from Dylan’s own Chronicles) how Dylan differed from the other denizens of Greenwich Village in 1961 and 1962, borrowing stances and attitudes from Woody Guthrie and others to forge something new from collaging them together: in other words, why people are still writing books about Robert Zimmerman rather than Dave Van Ronk. He illuminates how a folk standard like ‘No More Auction Block for Me’ can eventually give birth to something wildly more affecting and ambitious like ‘Blowin’ in the Wind’, and how some of these stylistic breakthoughs allow Dylan to move on to writing songs like ‘A Hard Rain’s a-Gonna Fall’.

This is, however, only one side of Bob Dylan: stylistically, he was already travelling faster than others. Encounters with Brecht and, specifically, the song ‘Pirate Jenny’ lead, via Allen Ginsberg, to ‘Mr Tambourine Man’ and the other canonical songs found on Bringing it all Back Home (1965). The multiplicity of vision Dylan took from reading Rimbaud begins to suggest ways in which he can seize the distinctively modern moment whilst still reflecting wider sociological currents. Then there are the electrical currents which animate both Highway 61 Revisited and Blonde on Blonde within two years. Hampton negotiates these well-trodden paths and is particularly illuminating on the structural features of ‘Queen Jane Approximately’ and ‘Ballad of a Thin Man’. The chapter on this period, ‘Absolutely Modern’, finds many new things to say about the fierce intelligence Dylan brought to the art of songwriting whilst creating an incredible sequence of songs.

All studies of Dylan then have to deal with his withdrawal from the public eye in 1966 and what follows: John Wesley Harding and the eventual release of The Basement Tapes. Hampton wisely ignores the question of Dylan’s motorcycle accident and focuses on the simpler genre exercises that filled this album and the succeeding Nashville Skyline of 1969. The less complex songs lead to fewer levels of meaning and Hampton seems to struggle to shed light on ‘All Along the Watchtower’ and ‘Dear Landlord’, where biographical detail is crucial. Hampton asserts that Dylan falls back on older relationships between subject and object in his songwriting, but there is surely plenty of striking imagery still to consider. Also, to dismiss Basement Tapes songs such as ‘This Wheel’s on Fire’ in a single comment is surely to short-change the reader.

Hampton is on safer ground when he comes to tackle Blood on the Tracks (1975), seeing Kerouac’s On the Road as crucial to the terrain of these divorce songs. More surprisingly, Petrarch and his sonnets are revealed as a major influence, as Hampton convincingly explores the rhyme-schemes of the lyrics. There are also biographical shadings, too: a less domestic, less settled Dylan writes more interesting songs. Desire comes out of his discussion very much a lesser album, in the shadow of Blood on the Tracks.

When it comes to Dylan’s religious phase, Hampton is less conflicted than many other commentators: he takes it as a given that Dylan has always been interested in gospel stylings and content, and chooses to focus on two major songs written as he was moving on again: ‘Every Grain of Sand’, and ‘Jokerman’, from Infidels. In this part of the study, more biographical detail might have been illuminating: there is a major shift from the evangelical certainties of Saved (1980) to the more wordly ambiguities evident in the Infidels songs just three years later. Like every writer on Dylan, he has much to say on ‘Blind Willie McTell’, one of his acknowledged late masterpieces, but as every Dylan listener will tell you, much of the power of this song comes not just from the blues images in the lyrics, but also from the impassioned conviction of the vocals in the two extant studio versions.

Finally, Hampton considers Dylan’s artistic renaissance, from Time Out of Mind (1997) onwards. Here he tackles Dylan’s ‘borrowings’ from other writers and old blues motifs quite effectively, with  an interesting postscript on his vocal delivery of the Sinatra songs he has recently covered. The search for citation can be an absorbing alleyway off the main thoroughfare, however, and the final chapter feels a little underwritten in places. One major quibble is that Hampton says little about the input of Robert Hunter on the songs comprising Together through Life (2009). As former songwriting partner to Jerry Garcia in the Grateful Dead, he has his own attitude to storytelling and ambiguity, and a consideration of this could have opened up new areas for discussion. Dylan rarely works with a co-writer: when he does, it merits consideration.

In all, then, this is one of the more thought-provoking books on Dylan’s songwriting. The casual fan and the Dylan obsessive will both be surprised by some of Hampton’s insights, and it does attempt a balanced overview of all stages of Dylan’s career. One wishes there were more on Oh Mercy, 1989’s precursor to Time out of Mind, and I continue to search for a serious discussion in books on Dylan of ‘Things Have Changed’, a song he obviously finds important and plays in nearly all his recent sets. It begs comparison with ‘The Times they are a-Changin’’, using Hampton’s intertextual approach. Despite these caveats, this is a stimulating and wide-ranging study.

Tweet
This entry was posted on 2 March, 2019 in homepage and tagged How Dylan Gets His Job Done, M.C. Caseley. Bookmark the permalink.