How He Wrote Us into Existence – A Fiction 14 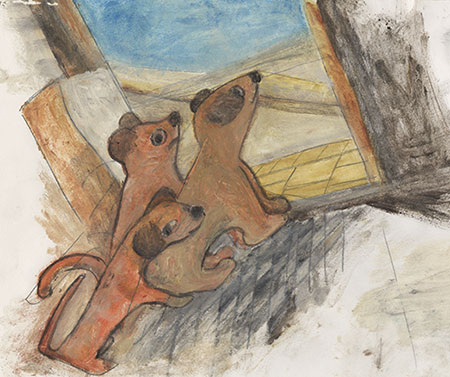 We forget what embraces us in a power cut, not a short one, but one that elongates itself beyond the stretch of one abiding summer noon, evening, and night and well into the red-hot day that whimpers into the house smelling like a dead demon.

The power situation has been improved since my childhood days when we used to gather on our roofs to exchange the latest gossip and used anything near the shape and size of a coffee table book as hand fans, and of course, we did have artwork infested hand fans – some are kept here somewhere because they are quite collectible.

Today when the power dies, Elora screams; I tell her not to panic as lights will return anon; it disregards my prediction; as the day rolls, we begin to talk all at once. We even think about those who are on ventilation or on oxygen support. What will happen when the backup generator fails? I assure them, there should be more fuel to keep those beasts generating. Another silly notion tickles us – what if the creatures and the insects realize that humans, already weak and afraid because of the virus, have lost their leverage against the other species. To throttle our silliness, the ideas even we do not believe in, I request Poet to emerge from his lair and finish his saga of the woman in red. Elora has little interest in the story, says that she will keep her eyes on the eggs and the cat. The cat may eat the eggs. The eggs may hatch and release something unknown and closer to the darkness.

The noon darkens in the frames of our panes. We feel blessed that the sun is hidden somewhere inside the cocoon of the clouds; we feel depressed at the thought of having too many shadows and no electricity.

Poet asked where he has ended. I hate when someone begins this. It carries too much gas. I say, coarsely, I cannot remember.

Poet shakes his head, says that he has paid for rent and everything, and adds that now I should buy him the whisky he asks for. Tomorrow, I shall order his Ardbeg 10.

He licks his lips. He was the first-timer eyeing to become a seafarer soon. The poets of the town desired to forge a movement. Something that would immortalize them. Black Mountain, New York, Formalists, Beat Generation, Confessionalists. They read those. Now wanted not to wait for the posterity to tag them. They wanted to come out with a tagline and sell it to the future. And Poet surfed on the blurry waves of love and lust, foggy in the details of the time, trusting on instincts. The woman chatted until it was too late to sleep, or sometimes, too early to wake.

The most thorough whereabouts were those cafés where you always sniff some congealed darkness, muffled music, warming up beer, the hidden staircases filled with cancer and air slowing down bearing the weight of the words. You can smell yourself, and you will always smell like those mentioned above. The woman liked that, but those places were not her scene, and soon Poet took his leave from the haphazard notions of a writing movement documented even before it began.

One afternoon Poet called her to ask for another dinner date. She asked if he had reviewed her poems. He said that they were fine. He did not read. She said, she was sure those needed editing. Do not shy from editing mercilessly. She insisted.

Poet edited every line. After editing the third poem he guessed that he earned his date. It was a rusty day. The restaurant was a rooftop one with minimal light. Light up a cigarette to witness the firefly face of your date. He read out the poems. She wetted his lips afterward. It began many rewriting. Poet was half-ghost and was writing. He, if this was his alter-ego, satisfied his ego by writing an even better poem on the same subject, one written from the opposite point of view from those writings he edited. He even sent both sets of poems from two email accounts – one he maintained for the woman sealed with a shared password and his old one. Sometimes he felt the pang of jealousy when his alter-ego won over his ego. The same editor accepted the woman’s poem over the ones written under a male name. The world, patriarchy, made Poet accept his loss as a kind of vague natural justice or balance tilting toward a woman over a man. Poet insists, he used his male spirit for the poems written under his name, and the set written under the woman’s name showed the female side he nursed, or perhaps, he argues, all men do until they are caged in a particular role diced by the society.

Poet says that his two selves continuously fed a third self, the one interactive with the outer world. The ego fed it a rush of blood. Alter-ego supplied it melancholy. The town weather turned bipolar as well – as if it recalled its childhood and rebelled against the same. It was as extremist as the politics it shrouded. Rain receded revealing a land of heat in the summer and cold in the winter. Other seasons disappeared. Poet’s third self-made no friend. It distributed rage and stark words without any bias. The other fuel to his anger was the woman, who had her own sense of distribution when it came to her heart. Poet found enough to be jealous.

His brazen call accusing her of betrayal startled the woman, albeit she displayed no noteworthy emotion in her voice, rather she insisted there were no promises and hence no vow was broken. He was. He was the glass shattered, and his own shard bled on their sharpness.

Poet’s pen darkened. The woman accused him of humiliating her in public with her writings. Yes, Poet posted all on social media. No, he did not reveal any name. It was quite clear though if one ever stalked Poet.

Funny thing, there was someone stalking. Let’s call her Green, the woman in green. Poet said.

Monsoon came into the town, and they thought it would not this year. Over a cup of coffee, they can argue that this was not monsoon; it was a spot of tenderness in the sea; it was a letter to the future that wrong directions should befall in every journey you all, townsmen, already embarked on. Green stalked into a soiree Poet participated, largely because the woman in red should be there as well, this time in arms of another individual, a theater persona.

Poet, green, sweating, read his part, and when Green asked for an autograph he turns his attention to her as an act of defiance and rebellion to his own sense of loyalty.

At this point, I interrupted Poet, say, his narration needs conversations to feel alive. It does not offend Poet. He considers. Perhaps we all should use more conversations and shorter sentences. Even when I write inside my head, live it, erase it with the following day.

“I’m Green.” She said.
Poet retorted, “And, my heart throbs in the left, hence I am a leftist, Red.”
Perhaps he meant that to be overheard by the woman in living-coral or red as we, or I, have nicknamed her in this chronicle.

The shower resurrected moss. The mossy terrace near the café where the evening inspissated bore the burn marks of the smokers’ sin. Poet whispered, “This cornucopia of cigarette marked lichen, in the fluorescence of the café-roof, seems the very negative print of the sky. In the sky stars twinkle; the rest of it is singed. Here, the moss gleams, and the tiny star-marks are black.”

Green said, “I like your poems. This in particular,” She turned to her cell-phone’s screen,

“The owl retains the house;
it was built by my grandfather
and demolished by my slumber;
I wonder if …”

Poet said, “I do not recall writing a poem like this, or on an owl.”

Green grinned, “No? Then it must be written by my subconscious.”

Poet thought that he must have been imagining that evening for quite some time, and now the hallucination appeared as several characters. Red. Green. Theatre artist. Him.

Night, burgled him, his dreams were the apartments with a plethora of discolored outlines on the vastness of empty floors and his eyelids were yellow-taped.

At this point, power comes back. Elora screams from downstairs; we rush down; there she stands – her face pale and her clenched hands tremulous. She says, “Look at the eggs.” The eggs have released whatever those have been cocooning.  The shells remain on the place allotted to them. Elora is frightened over the fact she has been right there at the time of hatching, she must have been, and yet she has seen nothing. We search for the cat and the kittens. Nothing alive seems to let its presence known in this house except us.

We step outside, into the unkempt garden by the north walls of our building. Wind plays with bushes. I, for the nth time, whisper, “Hello, uncle.”

Tweet
This entry was posted on 26 June, 2021 in homepage and tagged Kushal Poddar, nick victor. Bookmark the permalink.