Waiting for the Sun!

Alan Dearling takes us up Mount Sinai for the solstice sunrise! 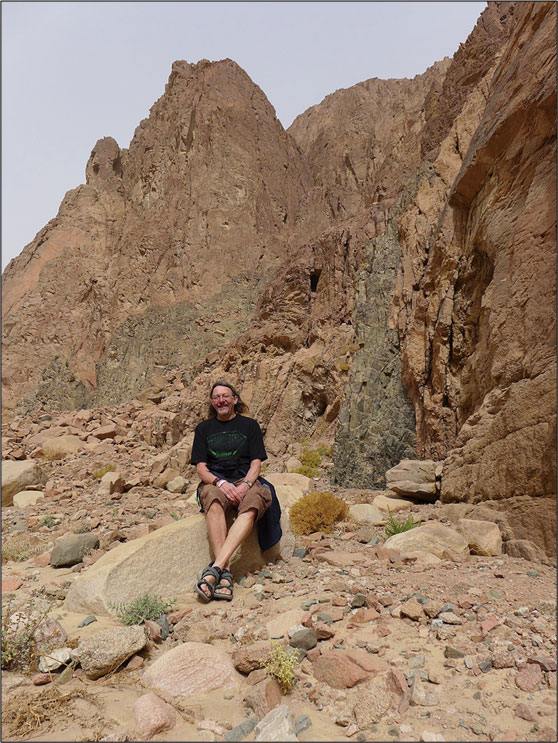 With travel outside of the UK off my personal radar for the present time – I thought that it was an ideal time to take a trip back in time to a personally spectacular, memorable experience in 2015. It very much reminds me of other celebrations for the various solstices and equinoxes over the years. 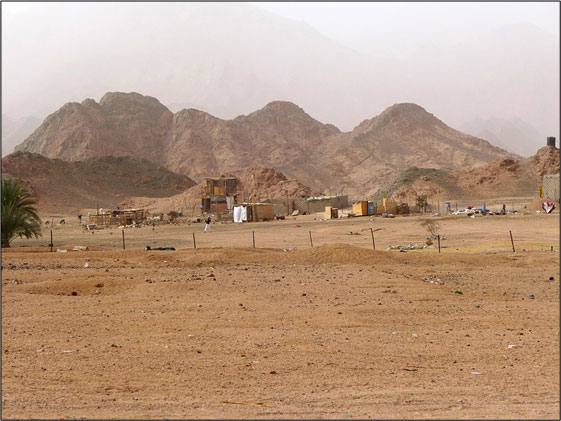 These pics (apart from the burnt-out bus) come from the really rather frightening at times, night-hike up Gebel Musa (Mount Sinai) in Egypt. It had been on my ‘bucket list’ for quite some time and it was worth being scared and tired for some great pics. 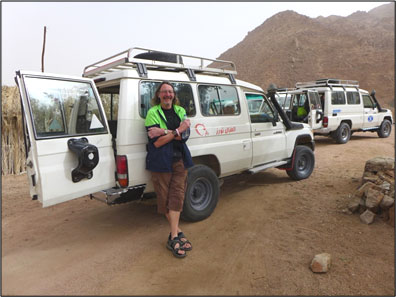 Before, reaching St. Catherine’s Monastery, my mini-bus took us into the desert, which is still home to Bedouins. It is scrub-land and nothing like the rolling sand-dunes of films. 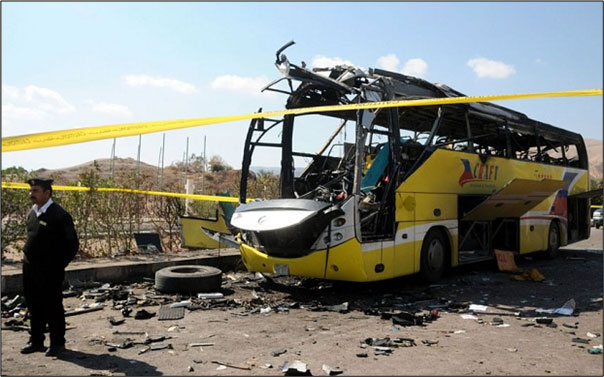 The walk up the mountain tracks includes about seven thousand feet of clambering. Precipitous, rugged and hard work, using a torch in darkness and being molested by marauding camels.  Egypt has experienced a seriously challenging time for its tourist trade in recent years and my trip in a small convoy of  heavily armed and military escorted mini-buses from the Sharm el Sheikh area, was possibly the first one sanctioned by the government, after the 2014 terrorist attack. This had used a road-bomb, which blew up a tourist bus, killing two Koreans and one Egyptian, en route to St Catherine’s Monastery, which serves as the entry and exit point into Mount Sinai.

I made some new friends too, including the Reverend Lisa Battye, husband John and son, Julian from Manchester. Along the trek, Lisa succumbed to the really rather aggressive pestering from camel-drivers who wanted tourists to clamber aboard their fairly unkempt camels in the dark ‘for safety’! And, of course, about £20 each for the ride.  I declined, but received verbal abuse and some unpleasant jostling. I guess the camel-guys were desperate for much needed tourist money. 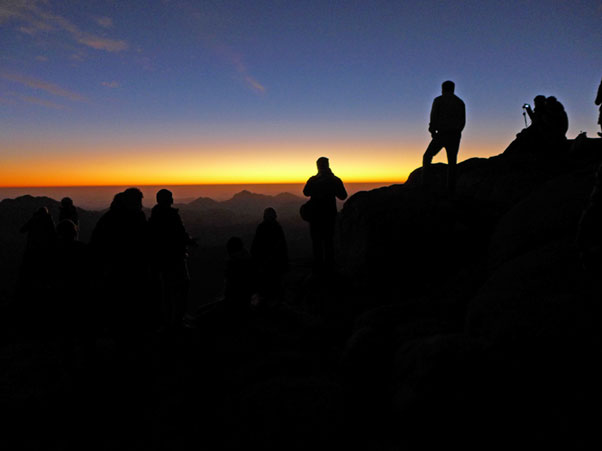 After many hours of scrambling up the rocky, narrow paths you encounter the Sinai base camp 3. It was freezing cold at this point. Any drinks and the use of hired rugs and shawls were expensive. It  was  time for a short rest, and finally, still in darkness, onwards and upwards on the unsteady, wobbly hike up the 750 steps (actually just irregular rocks, perhaps two thousand years old) on to the summit of Gebel Musa/Mount Sinai for the sunrise.  And what an experience it was! 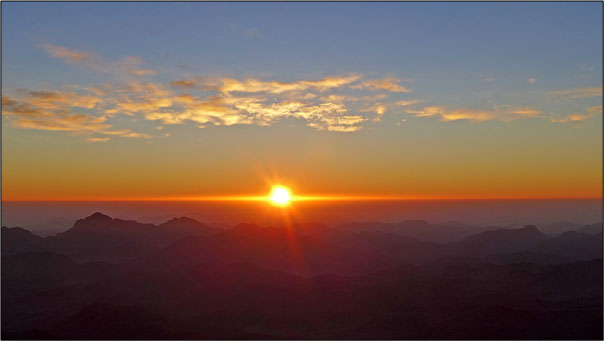 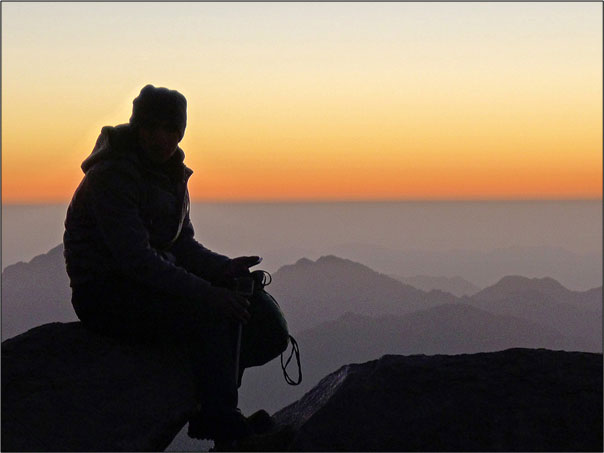 I’m not religious, but I guess that as a writer I do savour and enjoy ‘stories’, and the Bible certainly includes plenty of those. I’ll leave it to the Reverend Lisa to share her Sinai ‘experience’: 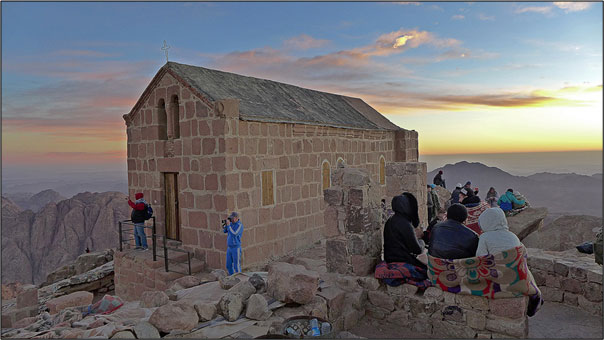 “A recent five-day visit to the Sinai desert enabled me to undertake something I have long wanted to do – to climb Mount Sinai and view the sunrise from the top, in the footsteps of Moses, who received the ten commandments there so long ago.

Pilgrims have been visiting the site for at least as long as St Catherine’s Monastery has been there to assist them, on the mountain slopes: a journey of over 700 rough-hewn steps to the top. It continues to be a penitential discipline that is eminently suitable for a pilgrim’s visit.

So there was something about the beauty of a magnificent sunrise at the end of the journey that was almost incongruous. How can a penitential journey end with such a blessing? The Sun’s rays crept round the horizon in changing colours, then there was the awesome brightness of its rising, seen through a near-cloudless sky, in the profound silence that descended upon all the travellers gathered there.

I was reminded of the glorious truth that, as Basilea Schlink taught in the aftermath of the horrors of WW2:  the product of repentance is the ‘Joy-filled Life’. 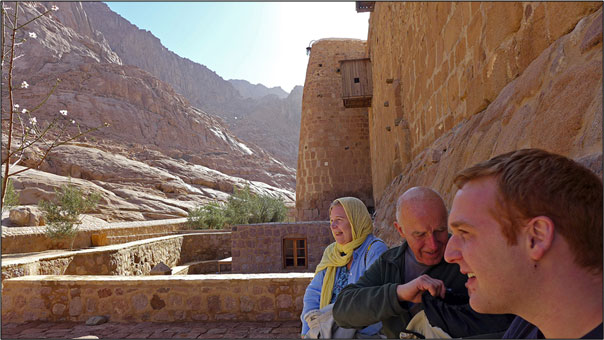 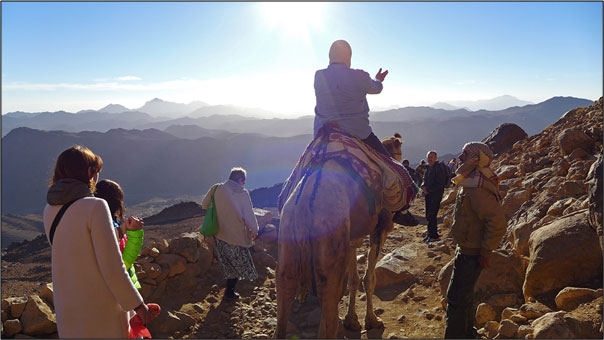 ‘Abdo’ and his handler were waiting for me 300 steps below, and as I mounted this large, placid camel for the final descent I thanked our righteous Father God for the Commandments that have taught us wrong from right, and for the place where they were given.” 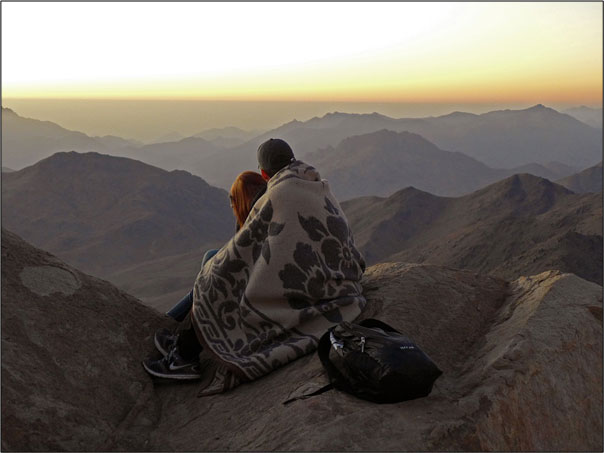 After the exhilarating spectacle of the sunrise over the mountain range, there was lots of hard grafting still to do, with over six and a half hours more trekking to face. And, I seriously do not like the downhill steep bits with the big drops.

In total, it ended up as 39 hours without any sleep. But, worth it…

Tweet
This entry was posted on 26 June, 2021 in homepage and tagged Alan Dearling. Bookmark the permalink.

One Response to Waiting for the Sun!