How to Make Friends by Telephone 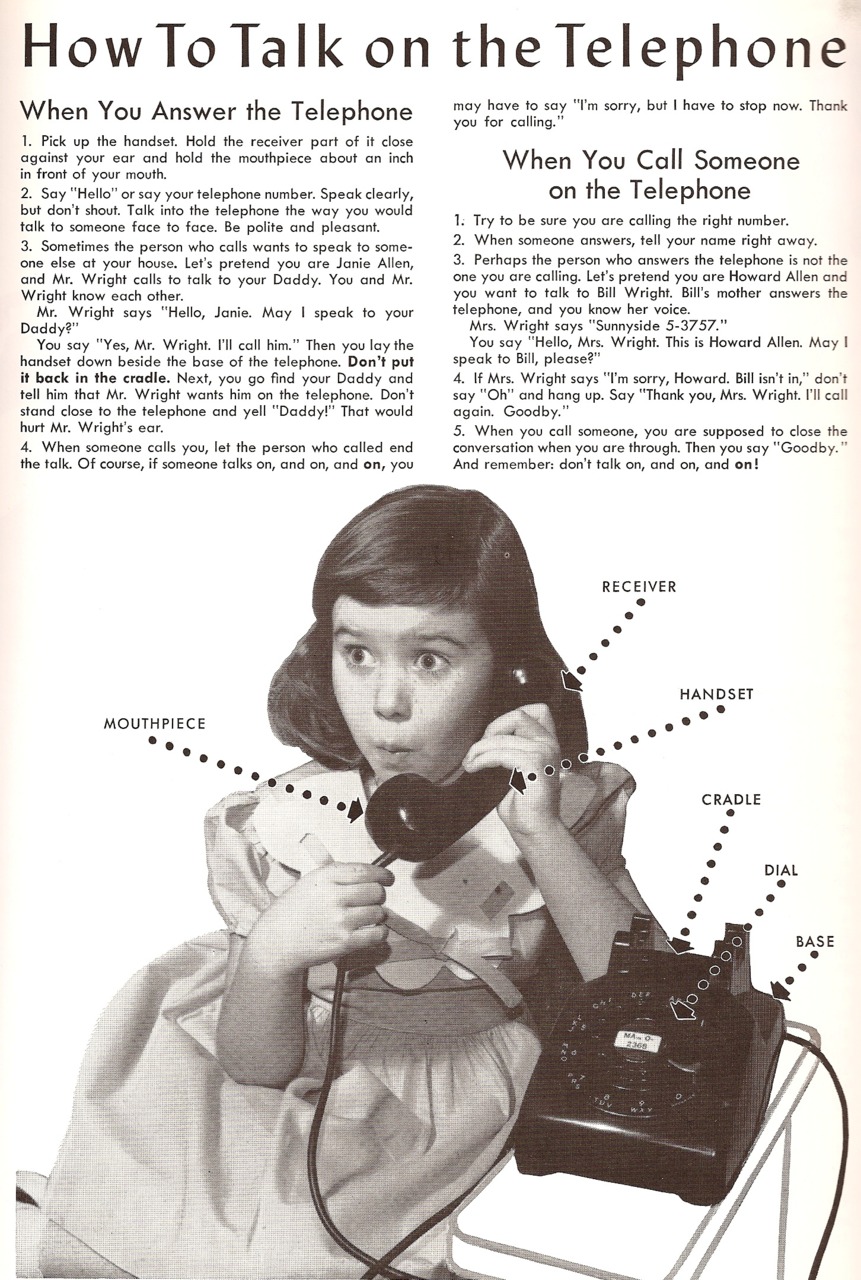 These new telephones are so confusing!

It’s amazing to think that, not so long ago, the telephone was a novel enough technology that books were published to help you master this strange new method of communication.  I’m sure we’ll look back on internet guides of today with a similar sense of curiosity – how could someone possibly need a guidebook for something so commonplace?

The book How to Make Friends by the Telephone was published in the 1940s and starts with a brief intro, then it’s off to the step-by-step guide which borders on the fanatical. 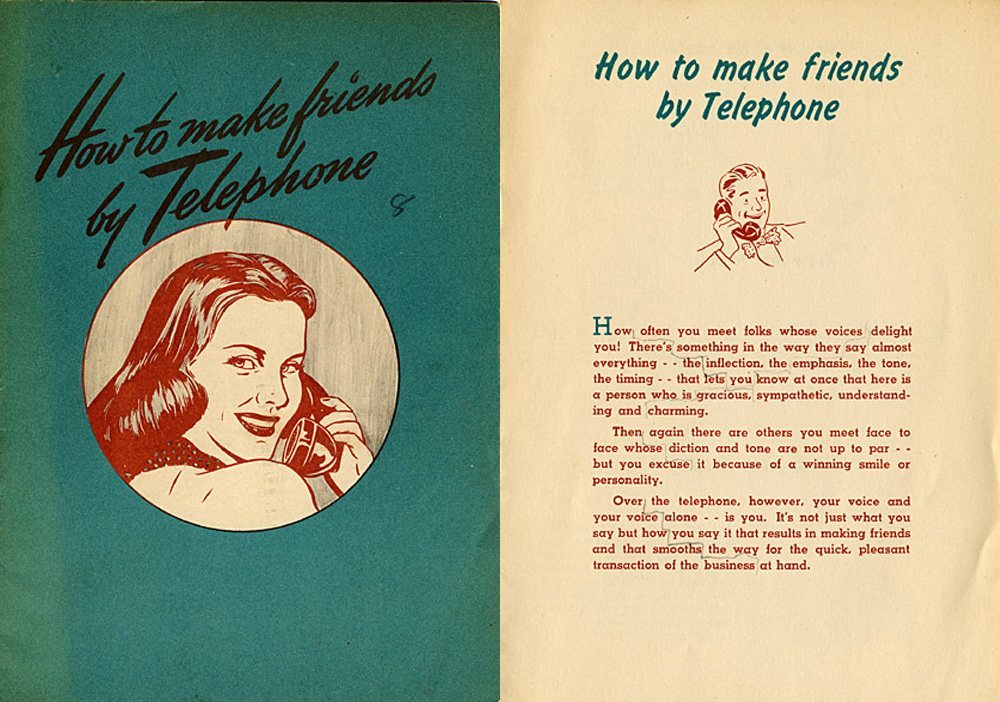 The Intro:  In which our book explains a very foreign concept – that, when using the Telephone (with a capital “T”), you will be reliant only on your voice.  Your winning smile can’t save you now…

How often you meet folks whose voices delight you! There’s something in the way they say almost everything… the inflection, the emphasis, the tone, the timing… that lets you know at once that here is a person who is gracious, sympathetic, understanding and charming.

Then again there are others you meet face to face whose diction and tone are not up to par… but you excuse it because of a winning smile or personality.

Over the telephone, however, your voice and your voice alone… is you.  It’s not just what you say but how you say it that results in making friends and that smooths the way for the quick, pleasant transaction of the business at hand.

Allow time to answer. “Wait at least a full minute.”

A full minute is a long freaking time.  FYI – a phone rings 8 times in thirty seconds.  If someone takes 16 rings to pick up, chances are they didn’t want to talk, but answered because the incessant ringing was driving them crazy.

Use a normal tone of voice

I agree.  It is annoying to talk to some mumbling idiot.  But what’s with the “Glub-Glub-Mo-Blon!”?  Apparently, the book is also instructing you to not use made-up languages or speak in tongues.

The wrong numbers I receive are generally angry and rude – worse, many give me the creeps.  If only this book could be required reading for the whole planet.

It’s strange to think that we would need this basic level of instruction to talk on the phone – but when you stop and realize that, until then, mankind talked face-to-face…. speaking into this devise must have seemed unnatural.

It also looks like this fellow may be taking this visualization routine to another level.  He’s a pioneer in what would later be known as phone sex.

Use the customer’s name
“There is no sweeter music to another person than the sound of his own name.”

I guess if that person happens to be completely self-obsessed, this would be true.  But for the non-egomaniacs of the world, the sound of their name is just a friendly nicety.

Explain delays
“…you will make friends by asking the customer if you can call him back rather than keep him waiting.”

Handle other’s calls tactfully
“May I tell him who called?”  Of course it’s a “him”; it’s the mid-century office space – could it be any other way?

Transferring calls
“If your telephone is served through a private br4anch exchange, slowly depress and release the receiver hook two or three times.  Stay on the line until your P.B.X. operator answrs and has been instructed as to the disposition of the call.”

Transferring calls was a bitch in the 1940s.

Hang up gently
“A receiver banged down may seem like slamming the door in someone’s face.”

Really?  Hanging the receiver down hard creates a louder disconnect?  I’m old enough to have used these old rotary phones and I call bullshit on that one.

Man, they had talking on the telephone down to a science in the 1940s.  “1/20 as good as A” – that’s a pretty precise quantitation.  With all the complex measurements and strict code of conduct, I can’t help but think that maybe they were making things a bit more complicated than necessary. 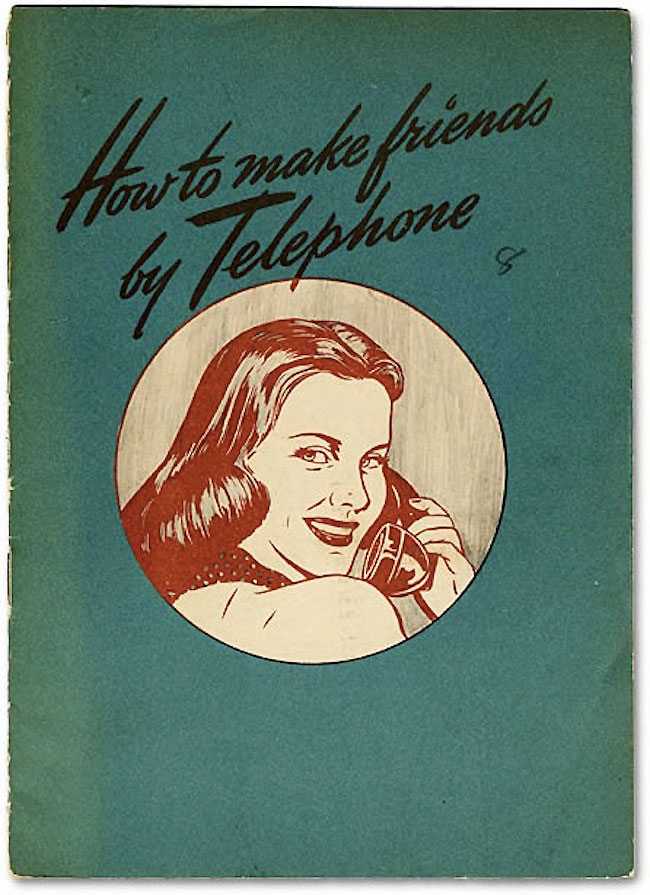 Tweet
This entry was posted on 2 March, 2019 in homepage. Bookmark the permalink.