Iceland 2015: The year of feminist revolutions

The little island of Iceland, so far North that it borders the Arctic Circle, is perhaps over ­represented in the world media given its micro­population of people. Iceland’s economic crash and jailed bankers receive frequent coverage, alongside its active volcanoes and other exotic tourist attractions. The vibrant air of feminist resistance flourishing in the country’s post­ crash years ­ especially in 2015, the centenary of women’s suffrage in Iceland ­ has received rather less attention.

Iceland’s mixture of ideologies is perhaps no surprise given its geographical location between Europe and North­ America. Scandinavian ideas of strong welfare compete with a heavy American presence. From WW2 (more or less) until 2006 an American army­ base was located near the capital of Reykjavik influencing the culture and politics greatly. Additional spice is added to this mixture via a strong Protestant work-ethic sitting alongside Icelandic nationalism built on a fight for independence gained in 1944; together, these build an image of a tough nation that survived harsh conditions for centuries. Thus, neoliberalism was easily able to infiltrate both Iceland’s political structure and its people’s ‘common sense’ of who you should be in Icelandic society, leading eventually to 2008’s economic crash. Before 2008, banksters were spoken of as heroic ‘Vikings of finance’; subsequently, many are imprisoned for financial fraud. This sort of fluid and easy change in national ‘common sense’ also represents an openness within the communal mentality. There is a certain plasticity which is mouldable in many different ways, and this is exemplified in the recent revolutions. 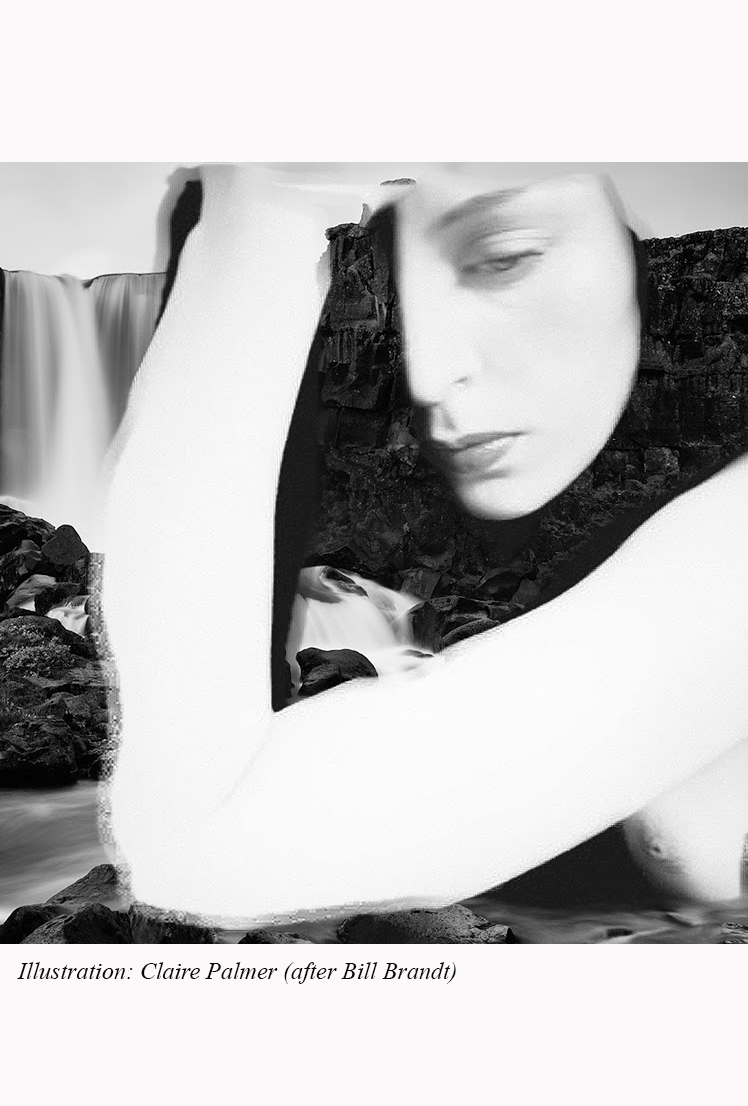 Women rights for 100 years Iceland’s battle for suffrage and women’s rights followed similar movements across Europe and was amongst the earlier nations to grant these rights. Now, feminist activists in Iceland can be seen as part of a ‘fourth wave’ of feminism currently occurring around the globe. In Iceland, a general frustration with the conditions caused by the economic crash has redirected feminists’ efforts towards a series of more tangible projects that had the ability to touch people’s everyday lives.

Previously, arcane economic jargon has obscured a popular understanding of what was really going on. During 2015, however, a new and unique atmosphere confronted these issues head on. Beginning with online movements, then spreading into wider communities, these were characterised by women opening up to each other, sharing difficult experiences and supporting each other. The remembrance of women struggling for their lives 100 years ago inspired those of today to reflect upon their own position and face the social walls of limitations forming and structuring their own lives. Unfamiliar and intriguing stories of forgotten women – our grandmothers and great ­grandmothers – were heard for the first time; predominantly working ­class women facing not only extreme poverty but harsh lives on the ice.

A new generation is appalled by how little has been accomplished across gender issues over the last 100 years. Feminism’s ’70s second wave took giant steps under slogans such as “the personal is political”, but did not exhaust the discovery of hidden gender­issues; today new dimensions of gender ­inequalities are constantly being discovered. Iceland’s ’70s feminists leave a great legacy nonetheless. The Red Stockings Movement, beginning in 1970, used a flat structure to make fierce demands for freedom from housework and from beauty­ standards.  It historically encouraged 25.000 women to go on a general strike for one day in 1975 (out of population of 250.000) and gather together in the biggest demonstration in Iceland’s history. The legacy of this movement disseminated into Icelandic gender politics. In particular, it led to the establishment of The Women’s List, a political party fighting for gendered welfare reforms. For example, in 2000 Iceland became the first nation to establish independent paternity leave that was not part of a ‘shareable’ time period.

Although Iceland often scores well on gender equality lists, it still has outrageous figures for gender­ based violence. For example, one out of every four women has been sexually violated according to Government Statistics.

Last May, the so ­called Beauty Tips revolution began when a woman posted online asking if others had shared her bad experiences with a well­ known Icelandic lawyer. The group soon filled up with posts by women ­ many speaking up for the first time about traumatic experiences of sexual violence. The group had started as a site for beauty tips and talk but became a place where women could share difficult experiences in a supportive environment closed to typical online trolling.

Soon, 25,000 women had joined the group; stories continued to appear to this day. The revolution flooded out of the gates of the group as hashtags such as #konurtala (women speak) and #þöggun (silencing) become popular on Twitter. A common theme through these stories was tremendous shame felt by women which prevented them from daring to speak about these experiences that had greatly affected their lives. Now, though, the silence was broken. Not only were stories being shared openly, but a more symbolic act followed: people changed their profile photos to either a yellow or orange smiley ­face with a speech bubble. These were orange if a person had experienced sexual violence, and yellow if a person knew someone with that experience. This was a way to show the frequency of sexual violence and equally a way for victims of sexual violence to ‘come out’ through a shared effort, without having to stand alone.

On June 19th, in the midst of these new revolutions, 100 years of women’s suffrage was celebrated. That day, orange and yellow faces joined the many celebrations ­ taking internet­ activism to the streets. Iceland was not to celebrate its Scandinavian welfare­equality presenting it as a national asset to bring forth to the international venue; rather it was to confront its hidden violence and inequalities by a new generation of women brought up in the midst of pornified objectification of the female body.

The Beauty tips revolution followed another revolution earlier in 2015 when many female nipples were ‘freed’ in order to de­sexualise women’s breasts. ‘Free the nipple’ was an international campaign designed to attack social stigma against women breastfeeding in public, whilst pointing out that newspapers such as The Sun published sexualised photos of topless women every day.

In Iceland, breastfeeding in public is less of a taboo than in many other countries, and many revolutionaries are young and do not yet have children. Consequently, freeing the nipple took on new implications and, as well as freedom for breastfeeding, worked to render ‘revenge porn’ powerless: Iceland’s high schools filled up with topless students proud of their diverse bodies and breasts. An ex-­lover could not take a revenge on a girl by distributing a topless photo of her because she had already drank her cup of coffee casually topless in school!! A new generation of political students was emerging via the many feminist organisations that had popped up in high schools and youth organisations. Radical politics are reemerging amongst an Icelandic youth that have remained highly apolitical (or only political according to conventional party lines) for three decades.

A new generation raised fully in the age of the internet faces a new range of gender problems. The pornification of sexual relations is aided by new modes of communicating that are often alien to the older generations. It even took a person such as myself – about ten years older than high school students – some time to understand what the fuss was about bearing one’s breasts. I was unconscious of the intensified sexual objectification that young women are facing today through constant smart ­phone photographing.

The political potential of feminist revolutions

Although these revolutions are not nearly over, they have already changed the discourse in Iceland and exposed a new range of issues to the public eye. Nonetheless, many necessary changes are yet to be made. It was a bit of a shock to discover how old­ school the juridical system remains when it comes to cases of rape and sexual violence, as revealed by a series of cases near to the end of the year. Another hashtag appeared, #daginneftir (the day after), to oppose the juridical system’s normative assumptions of how victims of sexual violence should behave after having been violated. The hashtag was used to point out ‘normal’ (as opposed to traumatised) activities of victims of sexual violence the next day ­ thus, verdicts based on victim­behaviour were strongly opposed. This resistance has reached a governmental/institutional level and there is new policy in the works right now ­ but the ability of the legal framework to tackle these cases remains to be seen. This feminist wave challenges the individualistic ‘common sense’ of the previous generation’s neoliberal paradigm but has not yet replaced it. In fact, playing the ‘feminist card’ could become another asset for the individual, maximising hers/his assets as labour power in an increasingly competitive labour market. Liberal feminism has already been prevalent for some time; a whole generation of women being brought up on Sex and the City. This can particularly be detected in how predominantly white and middle­class the feminism is in Iceland.

Despite the pitfalls of liberal feminism, huge radical potential remains in the new-found solidarities that have been built, and that continue to be built in both virtual and actual feminist spaces. The Girl Rock Camp is another example of the diverse projects that this wave of feminism has produced; a project aimed at teenage girls, making a space where they can learn to play instruments and form rock­bands without the presence of their male peers potentially increasing their insecurities. The act of opening up and sharing difficult experiences is one of trust, and requires willingness to listen to those that have experiences different than one’s own. Rather than being concerned with more equal representation of women and men in positions of power, these revolutions are with care. In this way the aim has been on ethically and politically emphasising new sets of qualities, and qualities which are traditionally/historically related to the feminine. This form of politicising with care can have a radical potential for further political transformation. The revolutions and resistance in recent (Western) history are those of patriarchal times and thus they unconsciously bring forth a greater emphasis on masculine qualities than we realise.

An example of this may be the “rhetoric of war” so frequently found in radical thought. A feminist revolution alter our ways of being together towards a more caring and affirmative bonding. This kind of bonding does however not exclude the critical nor aggressive force as can be seen in the recent revolutions. It is my hope that we can use this energy to face changes in Iceland relating to its rising tourist industry and ‘better economy’, including its rapidly forming/widening class distinction between the Icelanders/Icelandic speakers and the immigrants/non Icelandic speakers. 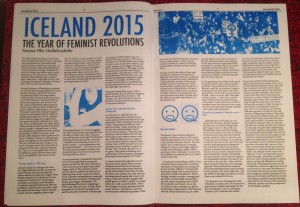 This article was originally published on January 16th
in ‘issue zero’ of the newly launched print edition of the International Times.
A limited number of copies can be bought from artist Darren Cullen’s online store here:
http://spellingmistakescostlives.bigcartel.com/category/international-times

One Response to Iceland 2015: The year of feminist revolutions