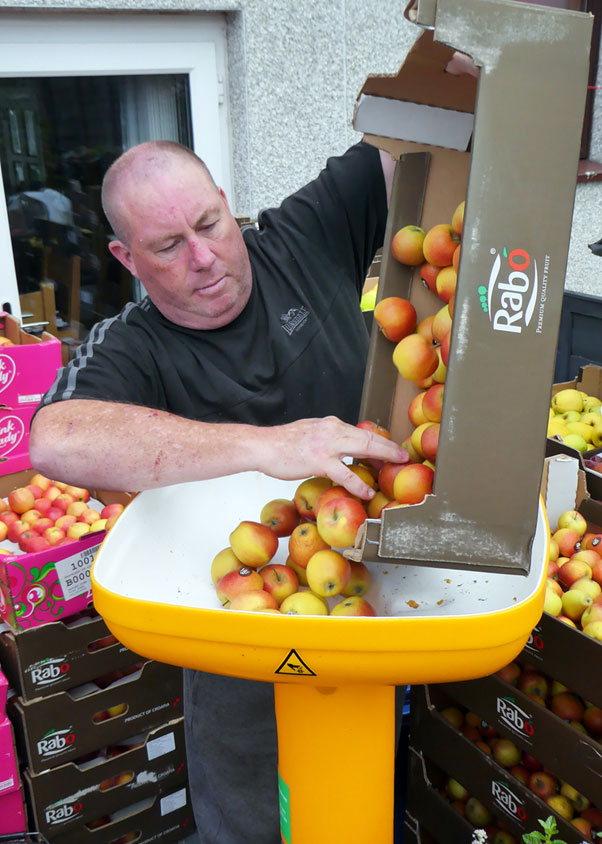 I’ve known Phil Elliott for well over a decade since his Peel Walls’ cider-making days outside the village of Ayton in Berwickshire. He’s a larger than life character. He looks the part of an artisan scrumpy farmer, or, a butcher, brewer or baker, come to think of it. I think he’s actually worked in all those professions. 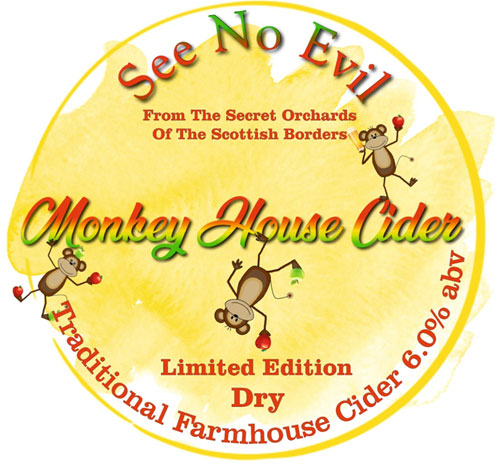 He’s now a year into commercial cider-making under the Monkey House Cider moniker, working from adapted, and totally legal, premises at the rear of his home in Berwick-upon-Tweed. It’s an impressive craft set up. I arrived late morning and soon rolled up my sleeves and joined his team of Bill, John and Joe – and became a part of the Cider ‘A’ Team. I’m not called ‘Cider Alan’ for nothing!

Last autumn, I was actually able to source fruit from two local orchards in the Scottish Borders of Berwickshire and East Lothian, and Phil crafted a special batch from these apples under the brand name, ‘See No Evil’ from the Secret Orchards. The owners of these two orchards have been well-pleased with the results from their trees.

Phil told me, “I just got the results back from the International Cider Challenge 2021 and we won three bronze medals. One was for ‘See No Evil’ that was made from the apples from Ayton and near Dunbar. A second was for pineapple and passion-fruit using the same base cider. And the third award for ‘Speak No Evil’, the cider we made from the apples from North Down Farm in Somerset that had been oak aged.”

When I arrived at Phil’s Monkey House, he was busy preparing apples for yet another new cider made from eating apples, many Pink Ladys, blended together with 120 litres juiced from Kingston Black apples and fermented with Champagne yeast. Quite a heady concoction, methinks! It’s a totally hands-on procedure, but aided by more up to date and easier to use and clean equipment than I originally experienced when helping out farmers and locals in West Sussex and later the Chideock Cider-makers in Dorset.  First up, is the job of cleaning and culling any rotten fruit. Then, it’s time to load the apples into the Speidel fruit grinder. This produces bucket after bucket of pulped fruit, which is then poured into a fine pulper/juice extractor. Apparently, this piece of kit extracts a maximum of the apple juice. The liquid is poured into fermentation barrels, topped up with the added Champagne yeast.

Phil then tests the starting specific gravity, using a hydrometer, which measures the final alcohol strength – usually in the range of between 6 and 8.5 proof for craft cider. But 11 and 12 per cent proofs have been known in cider farm barrels! Nothing goes to waste, since the fruit pulp is ideal for feeding to the local pigs. When organic apples are used the pulp is sent to an organic farm.  Later, the liquid is siphoned into containers to continue the fermentation process. For us, the ‘workers’, after a few hours filled with plenty of manual hard-graft, it was a late lunch-time to enjoy sampling a few of the ‘ones we made earlier’ from bottles, re-sealable containers and even from the oak fermenting barrels. Lots of lovely tastes to savour along with some real, slow food. Most of the produce on the table was from a local charcuterie. The pies and pork pies were made by Phil Elliott from meat supplied by Dean Mark Butchers of Eyemouth, that has been cured in Monkey House cider. I very much liked the drier ciders plus the dark, rich ‘Black Apple’ cider, which is extremely distinctive. A real one-off.

Phil told me, “All the craft cider and perry (pears) are made entirely from pressed fruits. No concentrate, unlike much of the cider which is sold as ‘craft’ product. I’m also making a couple of beers, including a rich, complex stout. I’m currently negotiating with another local craft brewery in the Scottish Borders to work in partnership for marketing and distribution. Lots of exciting prospects ahead and maybe larger premises and a tap room too…Watch this space! The Monkey House Cider company is online”: https://monkeyhousecider.co.uk/ 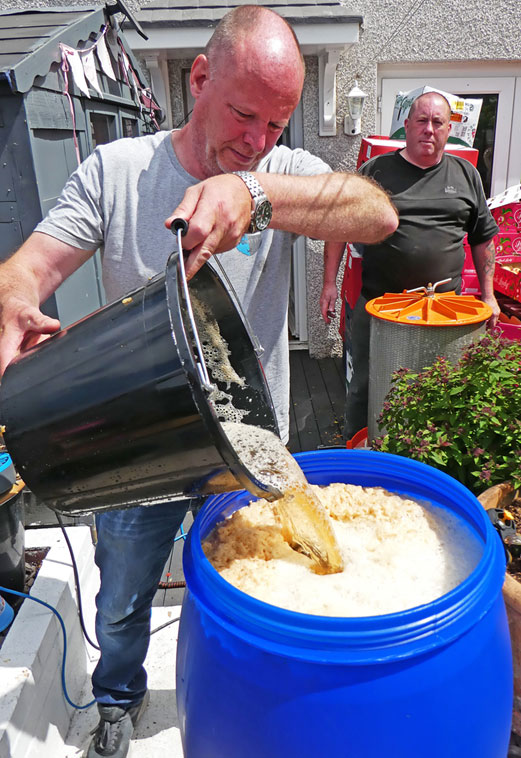 Tweet
This entry was posted on 17 July, 2021 in homepage and tagged Alan Dearling. Bookmark the permalink.