Neither this nor that 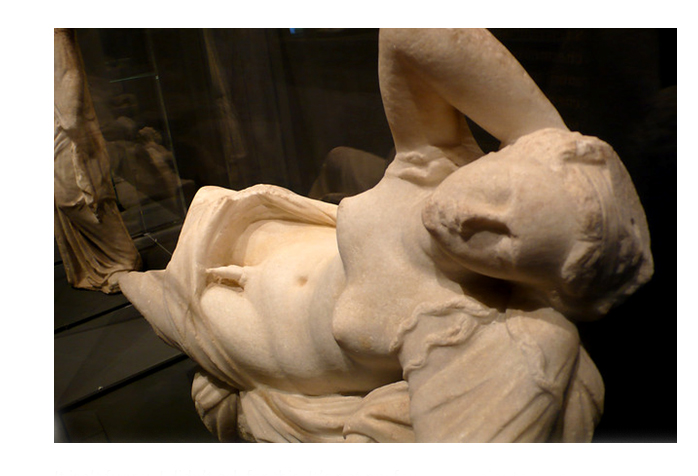 It isn’t funny. I didn’t ask for this. It’s not my fault. One minute, I was the golden child of Greece; the next… Well, you can see for yourself.

How did it all come about, I hear you ask? I’ll tell you, right from the beginning.

I was born the son of Aphrodite and Hermes, daughter and son of Zeus. I know, I know. Pretty peculiar, one way or another, but Greek deities rarely play by the book. My parents named me Hermaphroditos, which was, perhaps, a bit lazy and obvious, as well as quite a mouthful. Maybe they were both too busy with god-business to think of something original. Or maybe they were so full of self-regard, they simply assumed a combination of their own two names couldn’t be bettered. Either way, that’s what they called me.

By all accounts, I was the prettiest of babies; so pretty, I was often mistaken for a girl. “O look at little Hermaphroditos. Isn’t he quite the sweetest of children. Too beautiful to be a boy, with his golden hair and big blue eyes. He’ll grow up to be a real dazzler.” I don’t think mum and dad minded too much. After all, like most parents, they thought I was the best thing since stuffed pitta. As for myself, I was blissfully unaware of anything. Unlike now.

The older I got, the more beautiful I became, with a mane of luxuriant curls to match my mother’s, and a body that even Apollo was jealous of. In fact, I was so physically attractive, my parents decided to hide me away from all prying-eyed adulation, to be raised by naiads at Mount Ida in Lycia – for my own good, lest I be taken advantage of, in some ill-defined way. I didn’t mind, to be honest, since the prospect of spending several years in the care of any number of pretty, young, female river spirits rather appealed.

When I was thirteen years old, with the boy becoming a man, I began to notice certain changes in the way my body responded when I was in the company of the increasingly enticing naiads. Specifically, it seemed as if my penis had developed a mind of its own, or at least a nose and an eye. I was so convinced of this, I took to giving the appendage its own name: Perseus. Whenever the river spirits were close by, it was as if Perseus sniffed them out, and, with a wink of his single eye, stood up to greet them. I wasn’t sure whether I approved of his behaviour, but there was little I could do. At about the same time, I began to think and fantasize, about how it might feel to be a woman, with breasts and a vulva. More than that, I tried to imagine the actual sensation of sexual congress – my body and another’s inextricably conjoined. I was quite sure that probably every young man experienced similar thoughts, as part of the process of growing up; of sexual discovery – but perhaps it was just me.

One day, when I was fifteen or so, I happened upon a spring near Halicarnassus. I sensed the presence of a river nymph – or at least Perseus did, since he began to fidget and twitch beneath my robe. The spring was named after the exquisite Salmacis, a naiad of renowned beauty, and it seemed to me she was close by, watching as I undressed. When I entered the cool waters, sky-clad, I could feel her eyes burning into me, and I seemed to hear her whispering: “I love you, I love you, I love you…”. To be perfectly honest, this scared the Hades out of me, and I clambered from the spring as quickly as I could, and returned to Mount Ida in haste. However, this almost-encounter intrigued me, and I was filled with a curious desire to return to the spring at some future point, appetite whetted.

A year or so later, while in the region of Caria, the spring near Halicarnassus called out to me. Thus it was I found myself treading water for the second time, as naked as creation, while the divine Salmacis observed and whispered from the shadows. Perseus was already winking a dreadful wink, despite the chill, and I knew that something – some ‘thing’ of great consequence – was about to happen, although Zeus knows I wish now I’d been wrong. Suddenly, there she was, right in front of me. A ravishing creature, and not a bit spirit-like at all. Far from it, since I sensed and breathed and felt an animal presence: raw, instinctive, passionate and dangerous. Her black eyes stared into mine, and Perseus, quite panic stricken, took a droop to the south. “I want you”, she growled. “I want every part of you. Mind, body, soul – but especially body.” I was scared out of my bloody wits, and tried to back-paddle as fast as I could, but to no avail. “Give it to me. Give it all to me. Now!” How I didn’t soil the spring in my terror I don’t know. I pleaded with her; tried to reason with her: “Look here, we’re not the same substance, you and me. You’re spirit, and I’m not. There’s no possible future for us. You know I’m right. Just let me go, please”, and so on. When I’d quite finished my weakly, unmanly wittering, she wrapped herself tight round me, turned her eyes towards the heavens, and called out to the gods. “May this boy and me never be separated. May we be fused together forever. One creature, male and female, indivisible.” As she spoke, I felt her legs and arms around me, tighter, ever tighter. I felt her tongue as she kissed me, deeper, ever deeper. I felt a searing pain between my thighs, hotter, ever hotter. And then…

Salmacis was gone. Vanished from view. Except I knew she’d not really gone. Her orison had worked, for she and me had become one creature. As I swam to the edge of the spring, my breasts bobbed prettily in the water. When I dried myself off, Perseus sniffed, winked and went north all at once, for he sensed what lay beneath. A permanent frustration for him, and for me. And there was nothing I could do to undo anything. I was cursed for life. Neither this nor that, but both.

All that happened years ago. I’ve grown used to my life. In some circles, I’m even considered an object, or subject, of worship. There are cults across Greece dedicated to me; cults in praise of the hermaphrodite. Not very original, I know, but we Greeks are a lazy lot. It’s been a hard road to follow, one way or another.

Did Salmacis really love me? Was what she did an act of love? How much love is too much love?

Or was it simply animal desire; unbridled, wild, destructive?

I don’t know. Whatever Salmacis was and did, she’s now my constant companion and tormentor. And I’ve paid a heavy price for being born beautiful; so beautiful I was often mistaken for a girl.

View all posts by Dafydd →
This entry was posted on 4 April, 2020 in homepage. Bookmark the permalink.