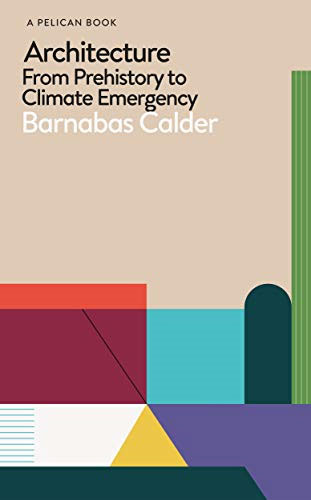 Alistair Fitchett on Architecture: From Prehistory to Climate Emergency by Barnabas Calder

The last time I picked up a book with a wide-ranging coverage of Architectural history was some 38 years ago. The book was Sir Banister Fletcher’s A History of Architecture and I was a first year Architecture student, seventeen years old and hilariously out of my depth. References to the Pantheon and to the Basilica de San Vitale in Ravenna can still make me break out in cold sweats. My nervousness then on undertaking Barnabas Calder’s Architecture: From Prehistory to Climate Emergency was not insignificant. Thankfully, if Fletcher’s esteemed work seemed dauntingly epic and read as distant and cold, then it turns out that Calder’s is, though equally grand in scope, eminently accessible and immeasurably warmer in tone.

As the subtitle of the book suggests, Calder takes on the unenviable task of charting the development of human civilisation from the time of the Pharaohs to the present day, using not just the context of the built environment as a guide, but the energy expended by those civilisations in manifesting power and presence through building. In some respect this is a dizzyingly vast challenge, and if Calder necessarily uses broad brush strokes to give form to the timeline, then the focus on energy consumption provides a solid surface on which to pick out details. This somewhat specialist (and particularly, one might say fashionably, contemporary) lens may perhaps also help deflect any criticism of a failure to fully explore notions of East vs West (though Calder does include an intriguing comparison between the Roman Empire and the roughly contemporaneous Song Dynasty in China) or Africa (though he does touch on Mansa Musa and his grand palace in Timbuktu). I’m sure someone, somewhere will take exception to something regarding gender that Calder has or has not said, but this is surely only as inevitable as using the phrase Climate Crisis (tm The Manchester Guardian and it’s Woke Metropolitan Elite Readership) in a review of the book.

If my own Grumpy Old (White) Man persona admits a weary wariness regarding the contemporary obsession with/insistence on viewing everything through the lenses of Gender, Race or The Environment then it admits too that if there is a subject where the thread of environmental concern naturally (ahem) runs then it is surely that of Architecture in its broadest sense. Calder understands this, but also appreciates that simply brow-beating the reader endlessly with data and explanations of How Humans Got It Wrong is Not The Answer. So whilst there certainly are quantifiable examples of energy use/consumption in the book, these are sensibly limited and strategically placed in order to help contextualise the ongoing narrative, which is a marvellously balanced one of artistic achievement versus implicit self-destructive industrial activity.

Calder’s writing is also finely balanced and inhabits the accessible ground between the stark bastions of the academically rigorous and the bleakly garish arcades of soundbite desperation. The outcome is all the better for it. His tremendous ‘Raw Concrete: The Beauty of Brutalism’ from 2016 certainly used the now ubiquitous approach of Personal History as a vehicle for exploring, in that particular case, the history of Britain’s Brutalist landscape. It certainly too gave a sense of where Calder’s aesthetic sensibilities lie. The chatty, anecdotal approach may be dialled back in this new book, but it nevertheless shows traces in the foundations as Calder lightly steps from building to building and epoch to epoch. The pace is necessarily brisk for there is much ground to cover and, even though this is not a short book, there is only a limited amount of time/space (or energy!) available, after all.

Throughout the book are suitably sketchy line drawings of various buildings referenced in the text, all drawn to the same scale in order to more easily draw comparisons. The pyramid at Khufu kicks us off in this series of sketches, and it is remarkable just how long it takes humankind to create anything approaching its immensity again. Grand Medieval churches (the French Gothic being my personal favourites) are dwarfed by its mass and only the late 20th Century industrial structures like Drax power station with its massive concrete cooling towers come close. The most telling use of this visual comparison tool, however, comes in the closing pages of the book. A drawing of the immense New Century Global Centre in Chengdu unfolds across several pages and illustrates the mind-boggling magnitude of material (and therefore energy) expended by China in recent decades. In contrast, the drawing of Cork House in London, which Calder uses as an example of energy-efficient (in design and construction) contemporary architecture, is almost microscopically small. Of course this is, in a sense, de-contextualised smoke and mirrors, for the functions of the two buildings are as different as their scales, yet it does rather bring into focus the overwhelming challenge that architecture in its widest definitions faces in this era of Climate Crisis (tm Liberal Thinkers Of A Certain Persuasion).

Calder’s book makes it clear that throughout history a narrative of Growth Is Good (from which it is easy to extrapolate ‘Greed Is Good’) has driven humankind, and this by default has created a distinct set of criteria from which ‘progress’ is defined. It seems equally clear that in order to avoid the catastrophic end game of the Climate Crisis (tm Any Right Minded Soul With A Modicum Of Concern For Equitable Sharing Of Wealth) then this set of criteria must be fundamentally re-evaluated, and that the role of Architecture in its widest sense must, by its very nature as a significant contributor to energy-consumption, be a primary driver in that change.

For just as the necessarily small steps taken by the individual in the creation of the Cork House are as insignificant in Real Terms as buying a bamboo toothbrush, steps must be surely taken somewhere if there is to be any positive impact on an increasingly short-term global future. Whether that shift change is down to a minority of individuals recognising an opportunity to leverage technologies and materials that limit environmental impact into power/wealth for their own greed, or is as a consequence of an awareness that individual power should be shared equitably for the good of all, only time will tell. In the meantime, Barnabas Calder has certainly given us a splendid pause for thought.

Architecture: From Prehistory to Climate Emergency by Barnabas Calder is published by Pelican Books and is available now.

Tweet
This entry was posted on 26 June, 2021 in homepage and tagged Alistair Fitchett, Alistair Fitchett on Architecture, From Prehistory to Climate Emergency by Barnabas Calder. Bookmark the permalink.

One Response to Pause for Thought.