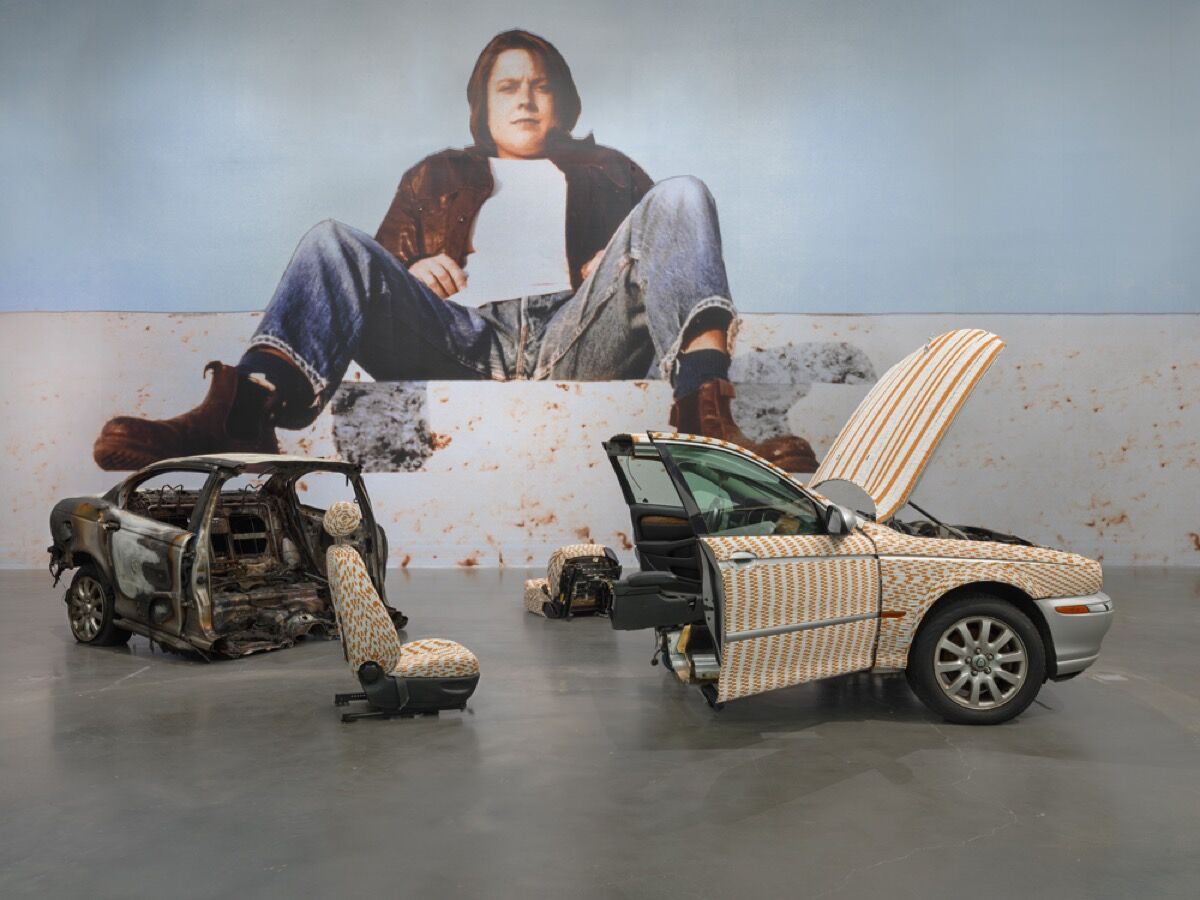 On the fourth floor of Sarah Lucas’s New Museum retrospective, “Au Naturel,” the British artist has installed a pair of jumbo-sized, cast-concrete penises and crushed car parts, works she made in 2013. The sculptures form a kind of abject graveyard of male excess—with Lucas herself presiding over all of it in a massive photographic self-portrait, legs brazenly manspread.
This might read like an irresistible send-up and appropriation of the tropes of masculinity, at a time when politics and culture at large are still haunted by the power-brokering and machismo of men. But the installation is surprisingly void of meaning or substance. The era of Donald Trump and Brett Kavanaugh (not to mention Boris Johnson and Jair Bolsonaro) calls for much more than a pair of monumental phalluses crashing around alongside a Christ figure composed of cigarettes, the latter suggesting a fuck-you to long-held orthodoxies and systems of oppression, as though they could simply go up in a few rebellious puffs of smoke. 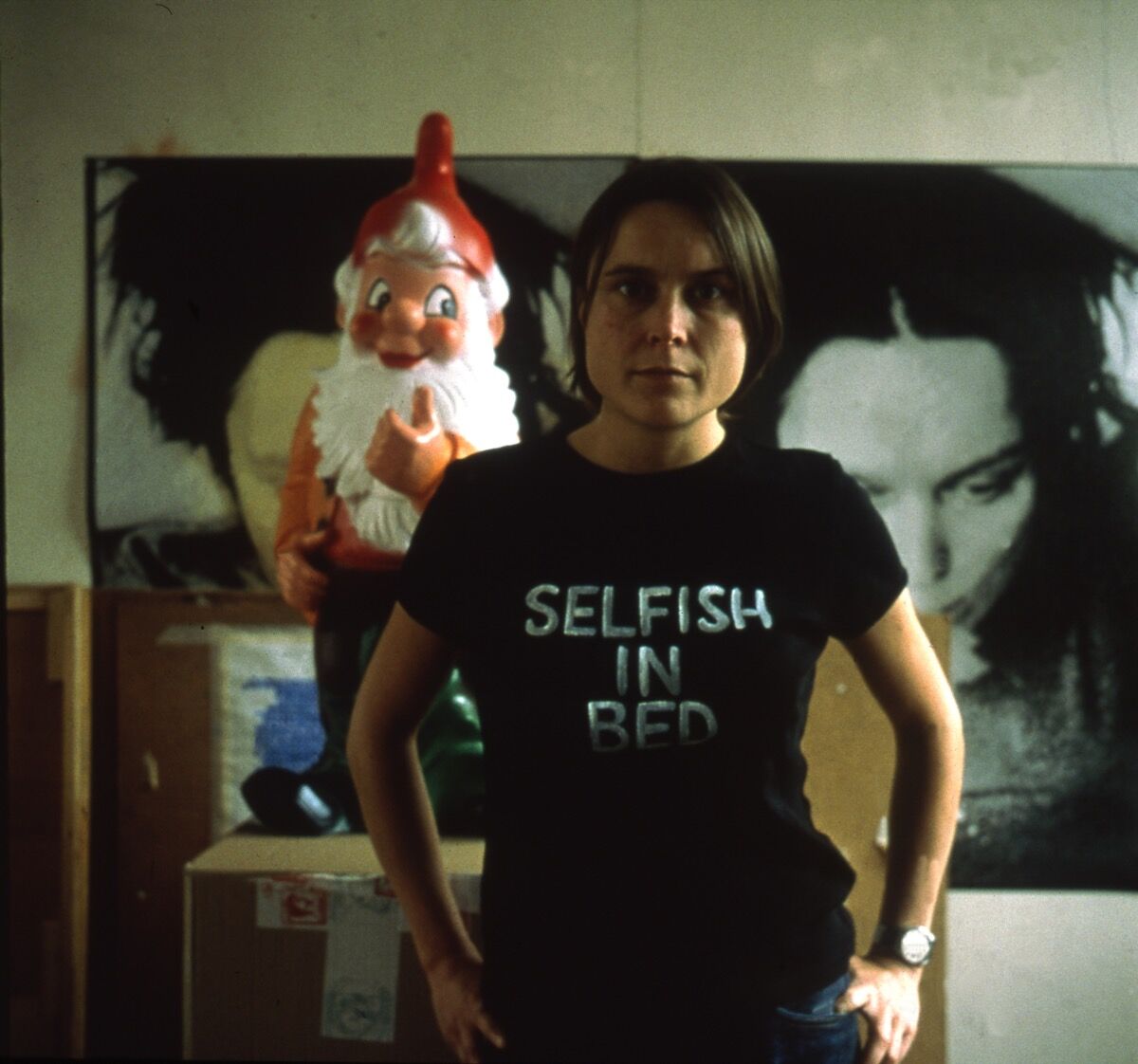 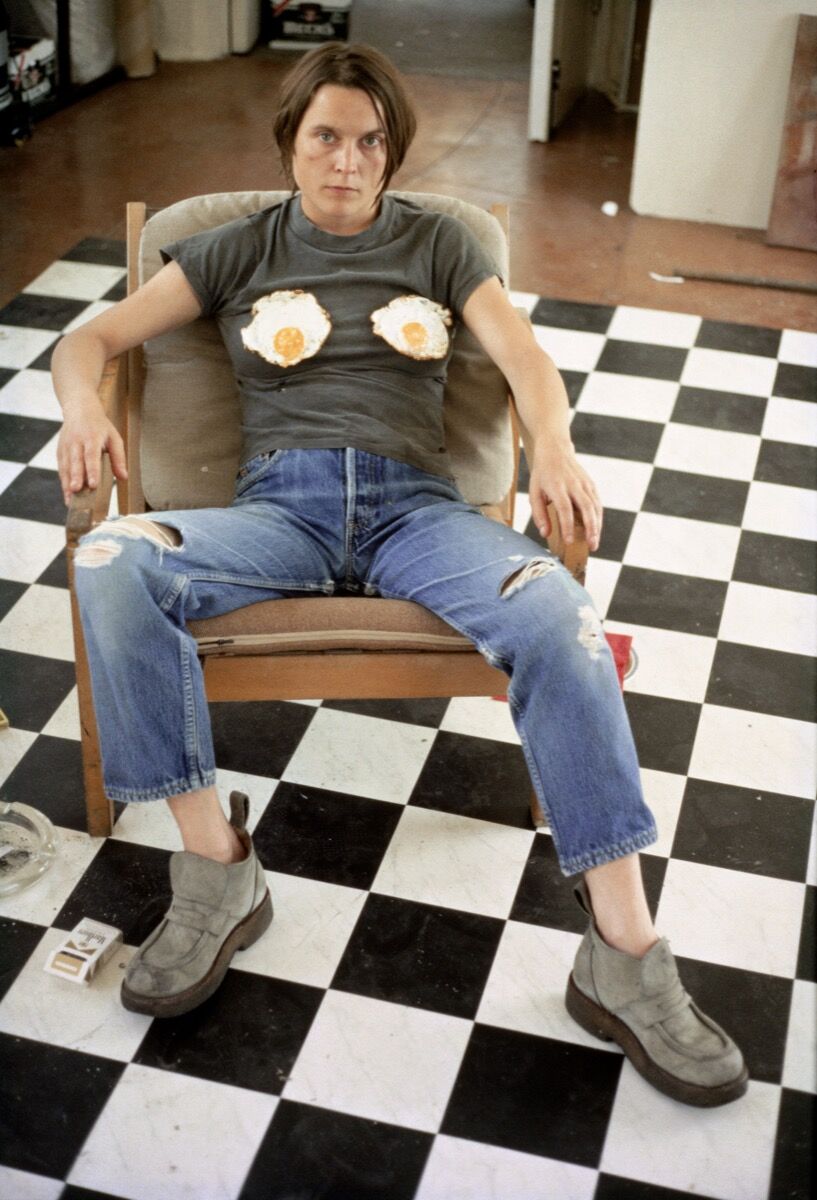 A similarly disaffected stance pervades Lucas’s earlier work. Several of her self-portraits appear throughout the exhibition: We see her in a T-shirt that reads “Selfish in bed” (2000); sprawled confidently over an armchair, two fried eggs for breasts (1996); and with a salmon draped over one shoulder (1997), recalling the tradition of men memorializing themselves with catch or kill, in moments of conquest over nature (Donald Trump Jr. and his proud hunting selfies come to mind).
But what do these appropriations of machismo do beyond poke fun at men behaving badly, which isn’t really news to anyone with a pulse? If these gestures carried a punch in the late 1990s and early 2000s—if Lucas’s claiming of male space and detachment once felt radical—they haven’t aged well. Lucas’s ironic drag now feels like a thin and repetitive one-liner.

Across the exhibition, there is not a great deal that feels fresh or revealing, and certainly nothing all that subversive. There are the yolky vestiges of eggs running down a wall—thrown by a crowd of female volunteers this September—that seem to raise a finger to procreation. (Incidentally, the abundance of egg waste in this exhibition drew the ire of PETA.) There are numerous biomorphic sculptures made of stuffed tights and bronze, which are formally interesting, but lean heavily on

Louise Bourgeois and Yayoi Kusama . They also sometimes recall the work ofSenga Nengudi (who began working with pantyhose in the 1970s) and even Dorothea Tanning; the latter was making soft sculptures in the form of monstrous, tangled body parts as early as the late 1960s and early ’70s. 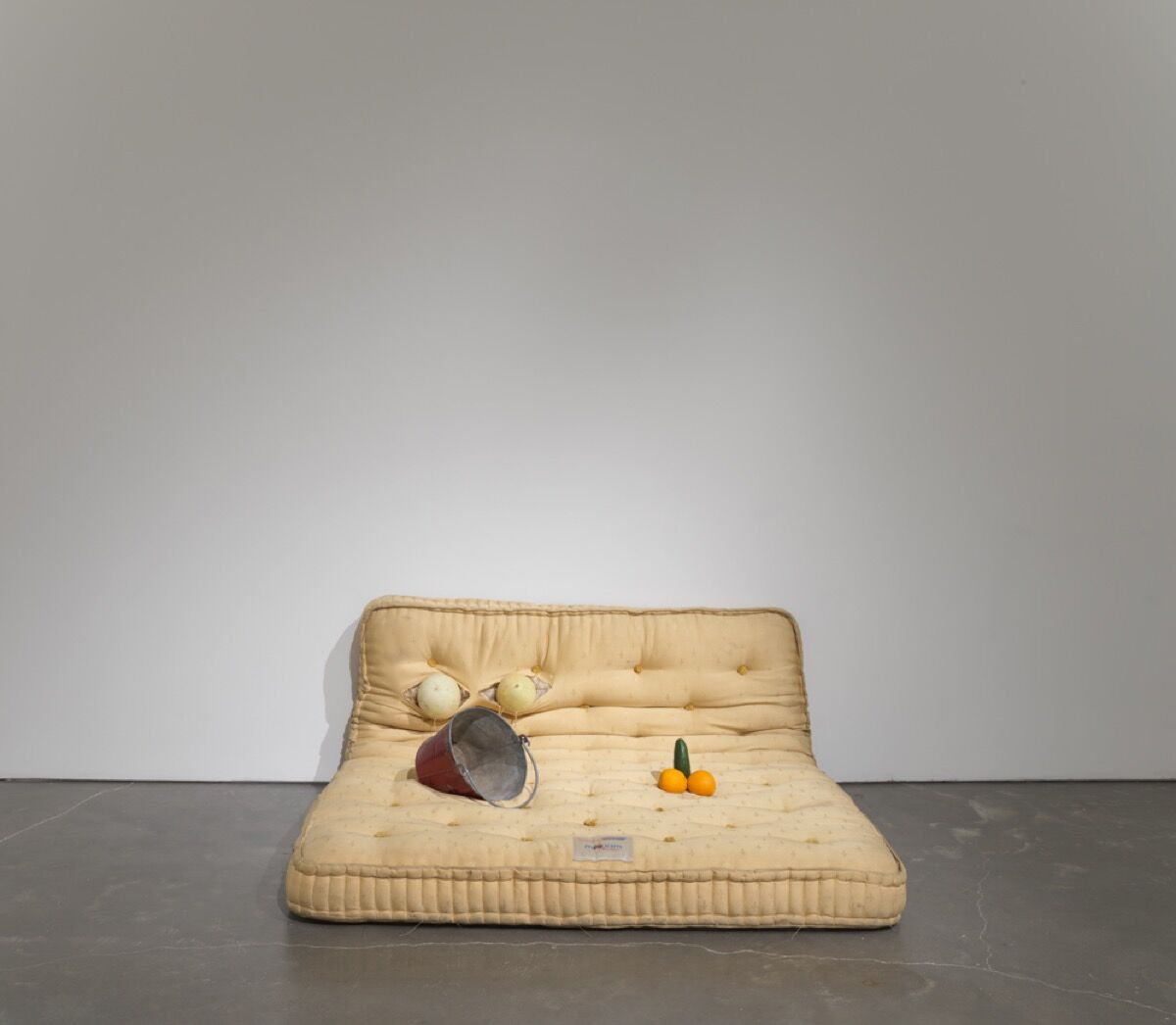 There is Lucas’s famous Au Naturel (1994), a slumping mattress that sprouts a penis and testicles in the form of a cucumber and oranges, and breasts and a vagina, via two melons and a bucket. It holds up better than some of her older work, still feeling original and deliciously funny in its irreverent send-up of the human form, stripping down male and female to a few humble (largely edible) objects and a worn-out bed. Together, they reduce the body to two of its more essential functions: sex and consumption. It’s warmer than some of her other work, too, suggesting a heterosexual couple lying next to each other, nervously, awkwardly aroused.
The strongest works in the show are the more formal and sometimes diminutive sculptures, ones made of plaster, wood, and metal—penises that stand on wooden plinths like ornamental relics or ancient bones, dicks composed of crumpled aluminum beer cans, or the seductive Things (1992): a barbed, phallic, cactus-like form whose spikes are cigarettes. These objects queer the penis, making it more complex, difficult, and eccentric—the male member not as an assertive organ, but as a form that is by turns shrunken, morose, delicate, or hostile. Each has its own character that brings nuance to these masculine surrogates, revealing what lies beneath the peacock-ery.
This more layered approach to gender identities manifests in the single most subversive piece in the exhibition: Egg Massage (2015), a video that shows Lucas’s partner, Julian Simmons, lying naked on a dinner table while the artist breaks eggs onto his body, with a crowd of guests looking on. Simmons is the muse, the object of voyeurism and consumption, the submissive—even as he chooses to rub egg into his groin, responding to the apparent pleasure of being drenched in procreational gunk. Lucas is the master of erotic ceremonies here, watching and massaging Simmons’s prostrate figure as he writhes around, fully embracing their gender-role switch. 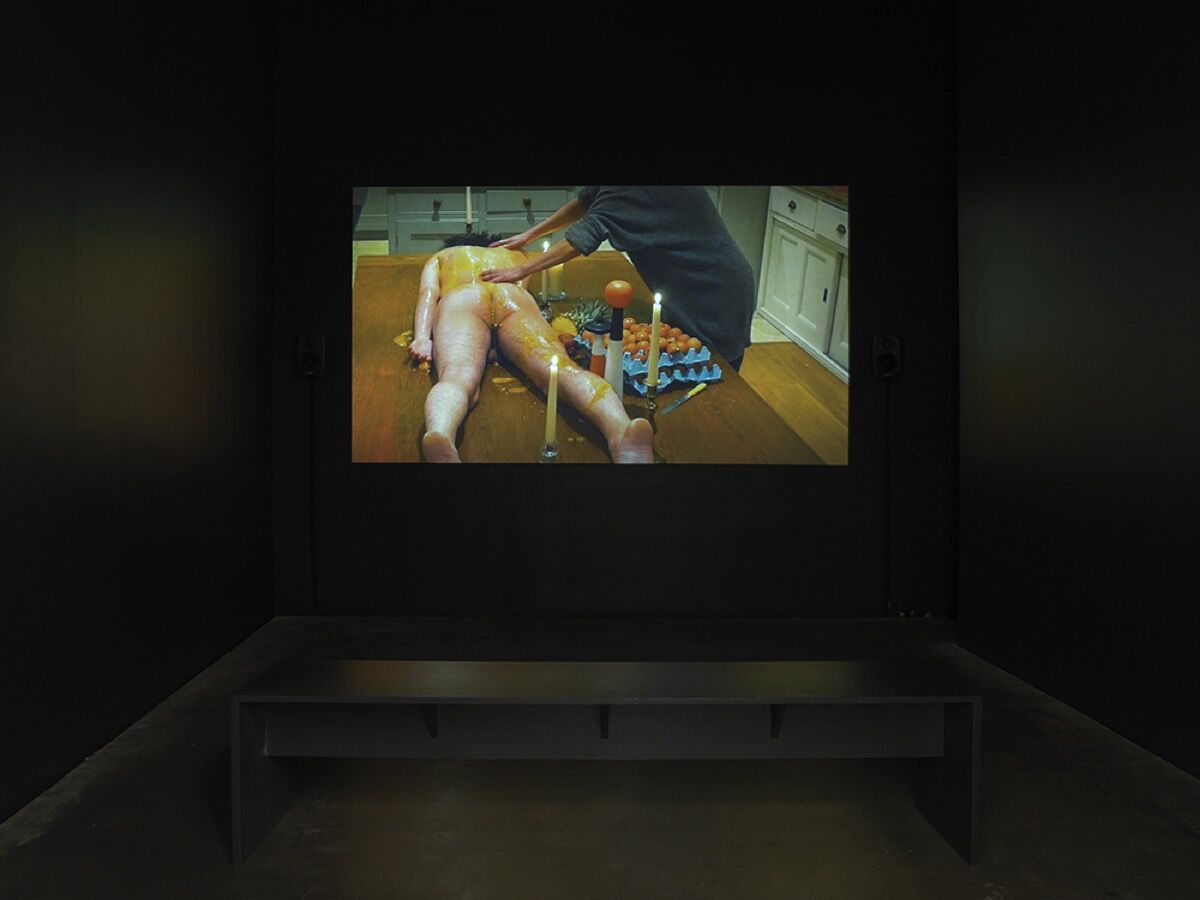 It is when Lucas is closely attentive to her subject, more exploratory, and perhaps a little more unsure of where she’s going that she takes us to uncomfortable or unusual places, and shows us something new. The more simplistic, don’t-give-a-fuck attitude that surfaces elsewhere, in her parodying of male bravado, lacks the power of affront or resistance needed to tear through distorting gender conventions. The air of ’90s rebellion—especially when the same ideas get repeated again and again—feels insufficient to our current moment.
There is a dose of grad school nihilism that lingers around much of this retrospective, as well as a seemingly endless litany of British working class signifiers (the eggs, the kebabs, the cigarettes) that wear thin. Consider Lucas’s languorous, disembodied plaster legs—made just a few years ago, to represent the U.K. at the Venice Biennale in 2015—some of which smoke cigarettes out of their arseholes. Edith is bent over a toilet, seemingly weathering the effects of a night on the bottle; Pauline straddles a chair; Margot is splayed out across the top of a freezer unit. These feminine proxies are all attitude—loose-limbed and lazy and doing anything but housework—but the attitude across all of them is the same. They are light on nuance, lacking anything much to differentiate them or bring them to life. Where is the heart
and soul here?
.
Tess Thackara is Artsy’s Writer-at-Large.
https://www.artsy.net/
Tweet
This entry was posted on 1 December, 2018 in homepage. Bookmark the permalink.