Posted on 12 January, 2017 by Andrew Darlington 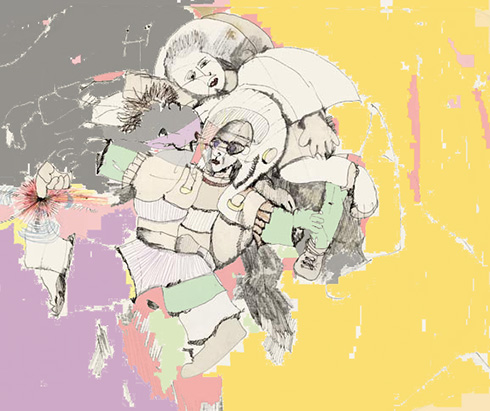 The centre is no longer holding.
The focus has shifted away from the world,
and back in on the self. But where is there a mainstream,
when the self has become central?
The camera looks out, recording and documenting the world.

The Selfie shifts that focus away from the world, and back in on the self. The self becomes central, the point of interest. The twenty-first century is seventeen years old. It’s hit puberty. But its culture is all about the effect and consequences of technological innovation. It’s own voice is less distinct.

The twentieth-century had two distinct phases. The jazz era which took in Dixieland, Ragtime, Big Band Swing and Bebop. Then the Rock ‘n’ Roll era from its 1950s origins, through the Beat Boom, Punk and Prog, through Brit-Pop, to neatly fade out at century’s end. Both were driven by technological innovation, by recorded music itself – shellac 78rpms, LPs, cassettes, CDs, mpr3, by the spread of radio and later – TV, by Hollywood movies, pulp magazines and paperbacks. But they took and shook and evolved and developed through vigorous creative phases that rocked the world. American soft-imperialism, maybe. Previous empires achieved global dominance through military means. The USA used Coca-Cola, Disney and McDonalds. Yet its music took on international dimensions to be returned in a feedback loop that roared and sparked with renewed energies.

The twenty-first century is seventeen years old. Jazz and Rock are still here to be plundered and fought over by niche audiences. But nowhere is there an innovative mainstream. Perhaps technology has enabled that there will never be a mainstream ever again? Merely fragmentations of specialism. The dominant cross-generational mainstream is the narrative reality X-Factors, taking the old ‘Opportunity Knocks’ template and fitting it out with interactive participation, delivering mass appointment-to-view audience within a multi-platform eco-system. It’s generated the consensus Leona Lewis, Susan Boyle, Alexandra Burke and the brand-designed Boy-band power-ballad. Sad that for a generation their most striking first musical memory is not Elvis in ‘King Creole’, the Beatles at Shea Stadium, the Sex Pistols at Manchester’s Lesser Free Trade Hall, or even the Stone Roses at Spike Island, but Will Young’s shock win over Gareth Gates on ‘Pop Idol’.

Perhaps there’ll never again be a Sinatra, Beatles or Bowie. Not because there’s not the talent – to claim that would be absurd, but because of the custom-individualised nature of the media itself. The centre is no longer holding. The focus has shifted away from the world, and back in on the self. The self has become central. Maybe, niche-innovation is proliferating on micro-cult websites with outrageous new art, poetry and music of cross-over fusions of the many. I hope so. Or perhaps the real innovation lies in the interconnectivity of the delivery systems themselves?

View all posts by Andrew →
This entry was posted on 12 January, 2017 in homepage and tagged Andrew Darlington, nick victor. Bookmark the permalink.