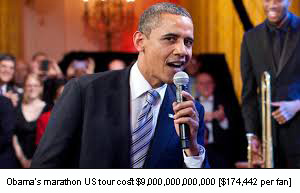 Obama the world’s most popular singing president has played the last gig on his ultra expensive US marathon ‘sell-out’ tour. The ageing karaoke performer (108) who has been No.1 for a record eight years in the US political charts with hits ‘Let’s Stay Together‘ (dedicated to the inmates at Guantanamo Bay) and ‘I’ll Be Watching You‘ (describing his painful bust up with Edward Snowdon and Julian Assange), wowed the audience in Chicago’s Convention Centre on Tuesday night playing a two hour set and completely made them forget what a shit tip he had left the world in.

Obama swept to success in 2008 after winning US hit reality TV show ‘The American Presidential Elections’  with international bestsellers ‘We Are Change‘ and ‘Hope‘ and went on to achieve countless accolades from mesmerized press and fans. But problems soon set in, with complaints over ticket prices called Obama Care and gripes about the soaring cost of his backing band ‘The Goldman Sachs ‘Too Big To Fail’ Blues Brothers Bailout Band‘ who charged a whopping $9,000,000,000,000 [$742,442 per fan] to go on the road with him when, apparently, ‘no other outfit could play the right notes.’

Beset with further inconsistencies, Obama’s over-budget but tuneful tour ground on four more years releasing a string of unpopular hits from the 70’s like ‘WAR!’ which went down badly with critics at gigs in Yemen, Afghanistan, Syria, North Pakistan, Libya, Iraq and Somalia after fights broke out between rival hardcore heavy Sharia fans and Obama’s security guards. Nevertheless, however distasteful, synthetic and facile the dashing superstar is, he’s predicted to leave an enduring legacy upon the world of international public relations.

Obama’s old manager and long-time CFR studio producer David Axlerod smirked, “Obama is so cool no one cares if he turns them into a debt slave and blows up their family. What a voice. We [CFR] are currently advising my showbiz buddies in the US Senate to pass new legislation demanding that, from now on, every presidential candidate can at least play the drums or dance, and if they can’t sing they must be able to lip sync from the auto cue. Fortunately for Trump, these statutes will come in after his inauguration in two weeks time. Idiot. That man can’t even hold a tune. Whatever happened to this country’s fine democratic principles?”

Its not all bad news for the Obama pop dynasty, with Michelle Obama announcing plans to follow in her husband’s glittered footsteps and mount her own star-studded world tour in 2022. Pundits are already predicting she could go all the way, posing the possibility of a new US super group if family members can be persuaded to ‘team up’ after her stint in the White House. The smart money [US FED] is on the band being called ‘Wammy Bammy Thank You Mammy and the Drones‘ and would feature Obama and Michelle dueting, with their kids adding seductive brain-washing harmonies. Further backing vocals would be supplied by Hillary Clinton accompanied, as always, by Bill on the sax. Madcap George Bush would be brought out of retirement to bash out some beats on his battle bongos and industry insiders are predicting slots could be made available for weird synth wizards Condoleezza Rice and Dick Cheney ‘should they wish to fill them.  Early remixes are rumoured to include ‘There’s No Business Like Show Business‘ and rather ominously ‘Set Controls For The Heart Of The Sun.‘

1 day ago – Uploaded by The Donald Sings

View all posts by Ethan →
This entry was posted on 12 January, 2017 in homepage and tagged current affairs, Ethan Harrison, politics, satire. Bookmark the permalink.