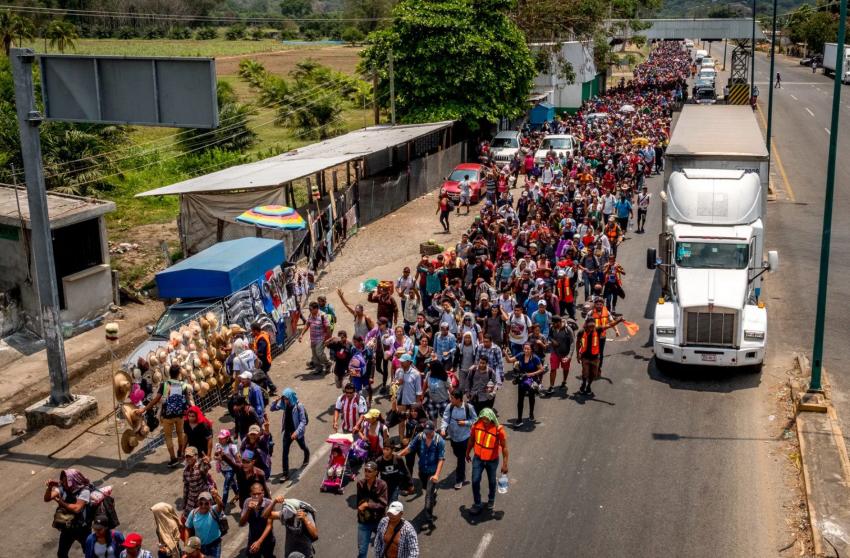 Thousands of migrants escaping dire conditions in Honduras, El Salvador and Guatemala are fleeing grinding poverty and violent gang crimes with a vague plan to reach the US and find safety.

It has been called the largest Central American caravan in decades as they cover a huge distance every day in soaring heat, rain and humidity. Mostly men, mostly young, but there are many women also, many carrying babies and small children. There are boys and girls holding their father’s hands and even some seniors as well as several people in wheelchairs.  A serpent of walkers, they’ve crossed deserts and rivers before reaching Mexico.

They struggle to haul their suitcases, backpacks, food and water-jugs under the searing sun.  They carry their meagre provisions, the absolute essentials, in rucksacks, dilapidated prams and plastic bags. An endless column of refugees. Pushing kids in buggies, strollers, pouches and slings; clutching their children, women and men, fuelled by despair and hope, walk with determination towards America (the land of the free.)

(“Hope is the most dangerous drug of all” a New Age guru had once said.)

A woman from Guatemala is fleeing an abusive husband with her two small children, her sister, and a male relative.

When volunteers hand out food and clothes, they dive into a sea of people and hold their breath, trusting that there will be enough food for them and their children. The Mexican’s give them everything they will need: food, clothes, blankets, shoes.

When they are given flip flops with pink jewels on them, they hope that they will last longer than the previous pair and look down at their feet which are brown like burnt bread and blistered on the toes. They remind themselves that bodies can heal.

A mother from Honduras, whose husband has been assassinated because he did not want to join a gang, is accompanied by her three young children. “If I didn’t leave they would have killed me also,” she says.  They’ve been travelling for the past fifteen days, never knowing where their next meal is coming from. Nevertheless, her face is radiant. “Sometimes we go along laughing, sometimes crying, but we keep on going.”

Marching on dusty roads under the relentless sun the men don baseball caps like the one Trump wears, but none of them have the slogan ‘America First’. To protect them from the sun, women wear straw hats, children have bandanas around their heads. They are a colourful gypsy crowd in their t-shirts, tank tops, jeans, hoodies, chequered shirts and old skirts.   They trek in the flimsiest of ill-fitting sandals, and broken trainers. “The trainers are best for jumping on the roof of a passing truck or train,” one migrant tells a reporter.

Some hitch rides whenever possible, others jump on overcrowded busses, trucks, and vans. Hanging on for dear life, young men and boys travel on open platform trailers used to transport steel and cars, or get in the freight containers of 18-wheelers and ride with one of the back doors open to provide air flow. They pile onto flatbed trucks, hang from car carrier trailers and even stacked themselves four levels high on a truck that usually carries pigs.

Many fall off the train to their deaths or suffer injuries that prevent them from travelling further.

A refugee from El Salvador who was injured riding the El Tren de la Muerte (“The Train of Death”) had to have his left arm amputated.

Seventeen-years-old José, of Yoro, Honduras, fell a week ago and injured his knee. “I can’t bend it,” he says, as he watches other migrants swarm aboard tractor-trailers. “Now I’m afraid to get on,” he said. “I prefer to wait for a pickup truck.”

The feet are the most important. Without them, they are not going anywhere.

A Red Cross nurse takes care of one migrant’s feet where blisters have formed like bubble wrap. Lancing and draining, scraping the skin off the soles of his feet.  Bandaged to his shins, the pain he endures is no joke, but he will travel on.

And they move on and on and on.

In the late afternoon’s sunlight, they go to a nearby river, splash and laugh in the water. After they have bathed with the other women, they stand in the grass and brush their daughter’s hair as they look over at their sons and imagine what kind of lives they might live.

A little girl wearing donated shoes covered in silver sparkles stands up in her baby stroller, her mother wraps her arms around her. “I feel her heart beating as I cradle her and I know that I’ve made the right choice to walk toward the unknown,” she says.

In the evening, as they pass again by the piles of clothes, they pick out a beret, a hand-knitted jumper, a military-looking coat, and put them all on.  They walk to the shelters, the sports stadium where they will sleep that night, or they set up camps around a local family centre, or a field where they fall exhausted on plastic bags, plywood and tarpaulins, their bodies covered in given throws.

The tired children are bundled up with jackets, woollen covers and scarves. Before bed, they stand near their family in flip flops a few sizes too large, and wonder why their family has decided to walk so far. Their parents tell them that they are going on a long walk, and they repeat it each day. They are still figuring out what that means. They see some older kids blowing up long balloons and playing tug of war while others jump rope, but they are too tired to join them. Some children are sick. With tremulous hearts, their parents take them to the welcome Red Cross stations.

And then it’s another sunrise.

They gather around giant containers of water to brush teeth, hand-wash clothes and bathe.  Boys use cut up water bottles to scoop water and dump it over their bodies. Some who are lucky, have a bit of soap to lather up their body and heads.

As they look at their reflection in the blue-grey puddles of water they see the difficult and tender movements lived over hundreds of miles written on their face.

Trump has sent some seventy-thousand troops to the US/Mexico border and has threatened to take away aid to those countries who haven’t done enough to stop the caravan.

“Selling clothes was the only work I could find in Honduras.” Twenty-one-year-old Edin Mata declares. “I barely made four dollars a day, and had to give a cut to the gangs.” Removing his camouflage Duck Dynasty cap, he shows a scar on his scalp left after a gang-beating when he failed to make the payment. “We live like slaves in Honduras.”

Like many of the younger men in the group, Mata entered Mexico by swimming from Guatemala. He said that when he reached the country’s northern frontier he would again swim across the Rio Grande into Texas – a much tougher undertaking, he said, “Because the currents are much stronger.”

Such determination has kept the caravan moving northwards, despite Trump’s threats.

“They gave me twenty-four hours,” says twenty-six-year-old Aida Acevedo slicing her finger across her throat as she described how a gang had demanded extortion payments on pain of death. “God is the one who will decide if we make it. Trump doesn’t have that power.”

As they move north towards Tijuana (a city which had more than 2,000 homicides this year) the authorities warn the migrants that to make the trip, they must pass through numerous areas dominated by Los Zetas, one of the most dangerous cartels in Mexico. In recent years, the cartel has established a profitable racket by kidnapping migrants.

Another dangerous place they will have to pass is the city of Orizaba, where there is no migrant shelter. There they will wait by the tracks for days to catch moving freight trains. If they miss one, they could be kidnapped by the cartels.

President-elect Andrés Manuel López Obrador, who takes office on the first of December, has offered long-term solutions, proposing work visas to Central Americans. The current president, Enrique Peña Nieto has, also offered refuge, asylum or work visas. Some have turned back but thousands continue to march on.

“We can earn more in the U.S. and give something to our family. But there, in Honduras, even when we want to give something to our children, we can’t because the little we earn it’s just for food, to pay the house and the light, nothing else,” said twenty-eight-years-old  Nubia Morazan, as she prepares to set onwards  with her husband and two children.

They chant political slogans. Helicopters buzz overhead. After negotiations with the Mexican human rights groups and the federal police the caravan is allowed to continue. Members of the migrant advocacy group Pueblo Sin Fronteras are accompanying them.

“They are not coming into this country!” the soulless Trump affirms dictatorially in his repulsive, whining voice.

Tweet
This entry was posted on 8 December, 2018 in homepage and tagged Hanja Kochansky. Bookmark the permalink.