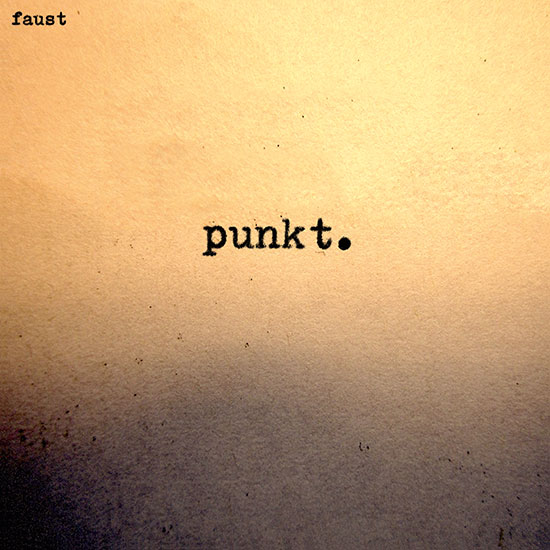 A disembodied voice above a clattering rhythm gives way to a sawing guitar, only to return accompanied by the sound of metal being tortured by squeals of feedback and wittering synths. Welcome to ‘Morning Land’, the opening track of Faust’s new album Punkt.

I say new, but this is the first stand alone release of an album made back in the early 70s as the final gasp of the band’s original line-up, which was also part of a wonderful 2021 box set which gathered up all of Faust’s music from 1971-74. At the time, Virgin refused to release Punkt or to foot the recording and hotel bills, so the band smuggled the tapes out and then sat in prison until two of their mothers paid up!

It’s actually one of Faust’s best albums, with a focussed energy, intriguing instrumentation, and a wide sonic palette of sound. There are abstract, distant recordings that sound like proto-dub at the far end of an echo chamber (‘Crapolino’), rousing wailing horns above a demented motorik beat (on the very wonderful 11 minute ‘Knochentanz’), whilst ‘Juggernaut’ offers an eerie take on rock music before mutating into a reggae skank underpinning what sounds like a jet plane taking off.

Elsewhere there is a two minute miniature, ‘Fernlicht’, a sound haiku that offers a stately procession between longer tracks; the more rambling and gentle ‘Schön Rund’, a piano sonata with noise interludes; and the closing ‘Prend Ton Temps’ which is constructed from looped vocals, backward tape percussion, distant chants and more clattering drums, all sounding like a demented war rally. Eventually it sputters to a halt, but since I have been playing the album on repeat, it all starts over again.

Faust, Can and Tangerine Dream, are the bands which pretty much defined krautrock for many in the UK. They each made very different music from the others, but all went on to damage their reputations and musical legacy with inferior albums, endless line-up changes and more mainstream, commercial or self-derivative work. There are at least two different Faust line-ups currently making music and touring (and of course not talking to each other), so Punkt is a welcome addition to the core body of work which Faust’s reputation rests on. Almost 50 years on this music remains fresh, original and innovative; it’s great to have an official version of this album at last – and it’s one of Faust’s best!

View all posts by Rupert →
This entry was posted on 12 March, 2022 in homepage and tagged Faust, Punkt, Rupert Loydell. Bookmark the permalink.