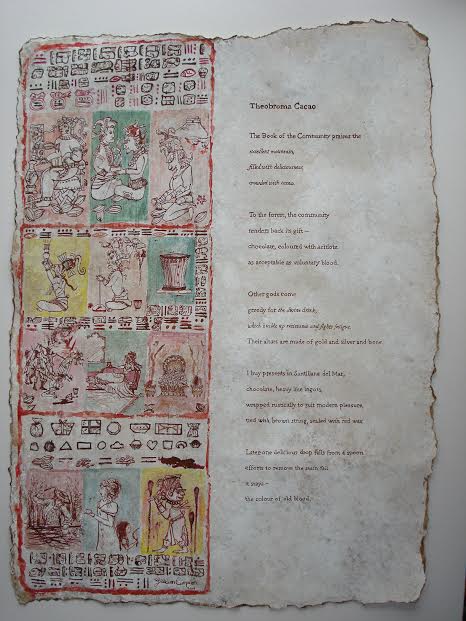 Above is how the exhibit looked.  An artist, and friend,  called Gillian Campden
worked the images from Mayan texts.

The Book of the Community praises the

To the forest, the community

renders back its gift –

as acceptable as voluntary blood.

greedy for the divine drink,

which builds up resistance and fights fatigue.

Their altars are made of gold and silver and bone.

Later one delicious drop falls from a spoon

efforts to remove the stain fail

the colour of old blood.

Theobroma Cacao* is a reflection on the history that lies behind our chocolate confections of the 21st century.  This  history shows chocolate was a delicious and valuable food as early as two thousand years ago. It was a sacred and communal drink among the Mayan people who first discovered the cacao tree in the tropical rain forests of Central America. Later, its value was recognised by their Aztec rulers and then by the Spanish colonists who brought chocolate as a luxury item to Europe. Its history is shadowed by the destruction of the Mayan civilisation and the decimation of its people. I was struck by how the story of chocolate raises issues for us today in how we source and use food.

* Theobroma Cacao is the formal botanical name given to the cacao plant by Carl Linnaeus, the great 18th century botanist.  Theobroma is from two Greek words meaning ‘Food of the Gods’.

Tweet
This entry was posted on 12 July, 2017 in homepage and tagged Carmel Cummins. Bookmark the permalink.