Posted on 4 February, 2016 by Ethan Harrison 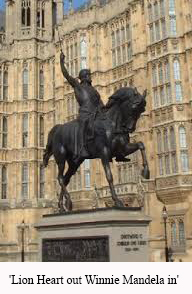 The forces of political correctivism scored another resounding victory yesterday after plans were announced to replace the statue of Richard The Lion Heart situated outside the House of Lords with another featuring 1980’s apartheid activist Winnie Mandela. Calls to replace the effigy of the 12th century King of England have come in the wake of other recently unpopular statues being removed including: Cecil Rhodes in Oxford and, in the US, Jefferson Davies, Robert E. Lee and even George Washington in favour of more politically correct individuals such as [respectfully] Camilla Batmanghelidjh, President Obama, Beyonce Knowles and Nicki Minaj.
.
Dani Wattabalongo, leader of the ‘Liberal Force for Acknowledging Racism & Colonialism Everywhere’ (or Liberal F A.R.C.E.), was jubilant upon hearing the news and whooped, ‘Finally this blatantly offensive statue of a man who achieved nothing in his life apart from killing hundreds of foreigners will be taken down and replaced with someone who reflects our country’s new rainbow-like multiculturalism. It is about time the oppressive colonialists who keep erecting these disgraceful insults to my… sorry our liberal sensibilities should think again and then again until they are forced to agree with me. I mean us. The British people.” 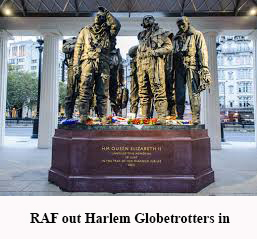 Mr Wattabalongo went on to argue that he wanted to replace the Lancaster Bomber Crew memorial statue in Green Park with the line up of the Harlem Globetrotters adding that this ‘would still not be enough.’ and continued in a similar vein, “Hollywood must also change its racist and sexist culture and, until Darth Vader is played by, at the very least, a pregnant, disabled Muslim woman, we will not be silenced. Also we demand that the UK’s disgracefully apartheid higher educational systems at Oxford and Cambridge must be 50% populated by mixed-race students regardless of their intelligence. Anything else is just sickeningly bigoted. I won’t even mention the ‘Blackcock Inn’ in Wales only that, after having it officially removed from Facebook, my friends and I will not be enjoying our twice yearly non alcoholic beverages there.”
,
It is thought that Mr Wattabalongo will eventually get his way whether anyone on the planet agrees with him or not because it is fast becoming absolutely impossible for anyone to pose a reasonable argument against his pseudo liberal beliefs in any way shape or form, even satirical, without being immediately characterised as a racist, imperialist, sexist, misogynist, bigot or a politically-incorrect, baby killing, pro-slavery, Nazi sympathiser who should not only be shunned by everybody with any modicum of ethical and moral standards but, more importantly, vilified by a self-righteous gang of unrealistic idiots devoid of any true comprehension of diversity, liberty and freedom of speech who neither understand historical context nor the way that important lessons from our past illuminate our shared futures.
.
.

The Blackcock Inn has its Facebook page suspended for …

Dec 25, 2015 – The banned Facebook page for the Blackcock Inn in Llanfihangel … was removed in 1994 after two young girls complained that it was racist; …

Cecil Rhodes statue to remain at Oxford after ‘overwhelming …

5 days ago – Cecil Rhodes statue to remain at Oxford after ‘overwhelming support’ ….. This has to be the most wicked piece of satire I’ve read this year.

View all posts by Ethan →
This entry was posted on 4 February, 2016 in homepage and tagged current affairs, Ethan Harrison, politics, satire, Social commentary. Bookmark the permalink.