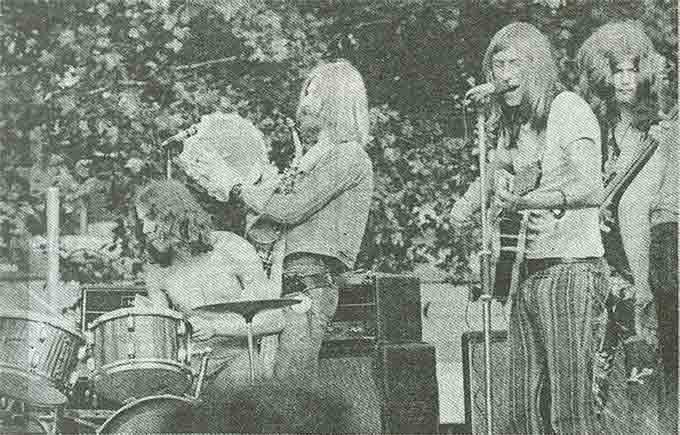 Wormstock August 22 1970 The week before the 1970 Notting Hill Carnival, Mick Farren and the Pink Fairies represented the Gate at a demo in Trafalgar Square, in solidarity with ‘East End squatters, Notting Hill blacks and Piccadilly freaks.’ August 23 The next day Hawkwind headlined a space-rock skinhead moonstomp on Wormwood Scrubs. After rain and accompanying technical problems (ie. electrocution) held up proceedings, Hawkwind won over the local skinheads, as much as the Kensington Post reporter who applauded the ‘brilliant young men from Notting Hill’ for eschewing commercialism in favour of doing ‘their own proverbial multi-echo booming explosive thing.’ The West London Observer summed up the event with: ‘Skinheads threat to mini-pop festival – but police deal effectively with bovver boys.’ The QPR hooligans contented themselves with mimicking the gyrating looning about of the hippies (for the record, Hawkwind were Chelsea supporters), and the promoters (from the Crypt folk club on Lancaster Road) sensibly replaced Quintessence with the less weird Quiver (who would come up with Rod Stewart’s 1975 hit ‘Sailing’). Hawkwind have since been described as a poor man’s Pink Floyd, a less political field-hippy version of the Pink Fairies, the Clash in flares, psychedelic/acid/head/folk/prog/cosmic/sci-fi/space-metal rockers, long-haired punks, ambient anarchists and proto-trance ravers. After ‘Wormstock’ they became the Ladbroke Grove band of the rest of the hippy era, though back then Mick Farren thought of them as ‘just up from the country’ and they would spend more time playing festivals than in town.

Wormstock West London Observer report (in Kris Tait’s ‘This is Hawkwind Do Not Panic’): ‘Hawk Wind’, one of the groups playing on Sunday. ‘Skin Heads’ threat to mini pop festival – but police deal effectively with ‘bovver boys’. It wasn’t exactly a second Woodstock – but a lot of young people agreed that the mini pop festival on Wormwood Scrubs was a good idea. The usual scourge of open-air events – rain – gave the festival the kiss of death, but despite the weather, about 500 turned up to hear music from Keith Christmas and a group called Hawk Wind. In fact, Hawk Wind, despite technical hazards, played some good music. They started late because as one member of the group announced over the microphone, “We’ve just been electrocuted.” Halfway through their performance, a group of about 40 ‘skin heads’ arrived on the scene. They marched, heavy boots swinging, through the centre of the audience and sent long-haired men and girls running for cover. But the police dealt quickly and quietly with the ‘skin heads’ before the situation became nasty, and the ‘bovver boys’ were last seen heading in the direction of North Pole Road, followed by police. The mini pop festival was organised by the Crypt Folk Club, Lancaster Road, Notting Hill. Stage manager and general organiser Ken Nevin said: “We are a non-profit-making club – the musicians are playing for us for nothing. It’s a pity about the rain – it could have been really fantastic if more people had come along.”

Tweet
This entry was posted on 22 August, 2020 in homepage and tagged Tom Vague, Wormstock. Bookmark the permalink.