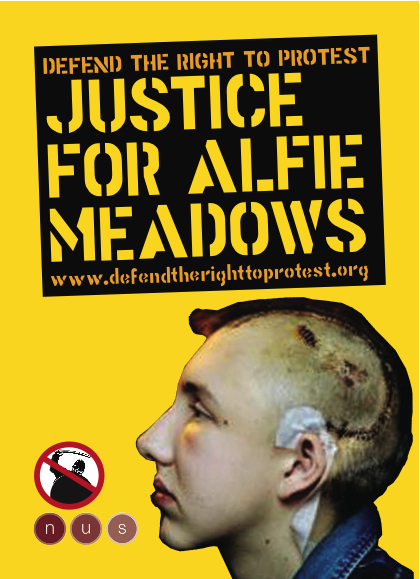 The media’s decision to spotlight Charlie Gilmour over the student suffering a brain injury was fundamentally wrong, argues Heathcote Ruthven 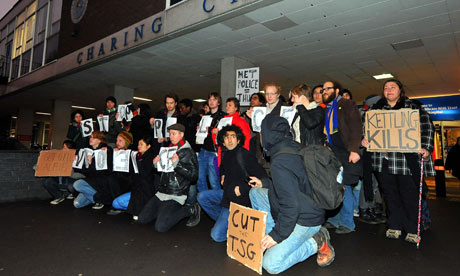 A vigil for Alfie Meadows outside Charing Cross hospital in London.

A Facebook hate group summed up a step-brother of mine quite well – “Charlie Gilmour is a Cnut”. In my experience, Charlie would be far more likely to harmlessly scream commandments at the ocean as King Canute famously did, than to maliciously offend or disrespect.

Another friend of mine, the humble and witty Alfie Meadows, spent three hours in brain surgery after his skull was struck when peacefully protesting in Parliament Square. The media at large have ignored these facts.

There is a fundamental inhumanity in the British media’s decision to spotlight Charlie Gilmour over Alfie Meadows.

Even David Cameron has condemned Charlie’s actions, yet not one politician has apologised to Alfie who was struck “the hugest blow he ever felt in his life” around 4pm on Thursday. He could easily have died.

Jody Mcintyre, who suffers from cerebral palsy, says he was twice dragged from his wheelchair trying to escape being kettled. The cult of patriotism and the aristocracy of fame have eclipsed our values of social justice, and even our respect for human life.

It must have been scary for the families of the kettled when they saw a BBC News presenter, for the sake of his own safety, ordered out of Parliament Square by police. Thirty thousand people went to the demo, many of them were kettled, some for up to 11 hours until 1am.

They were kept not only without food, toilets and freedom but, ironically, without any of the public services they were trying to defend, such as policing and healthcare. .

Having spent two weeks living inside the UCL occupation where people congregated, almost around the clock, in work groups such as media and outreach, activities, escalation, “the techie desk” and many others. Some spontaneous, some permanent. Twice a day at 9am and 6pm we had general meetings with the entire group in order to discuss the day’s agenda.

We hosted events with Johann Hari, Billy Bragg, Jon Cruddas, Razorlight and many others. As the students succeeded and worked harder, the paradigm of the broadsheets appeared more distant and stale.

Take, for example, the issue of violence. Most students I have met are not overly enthusiastic about preaching vandalism, though they recognise it was Millbank that escalated this movement. However morally confusing that first day of action was, it forced the government to seriously weigh in potential student activism as a cost of its policies.

Many feel the peaceful Iraq war demonstration achieved so little in such numbers because of its passive obedience.

Many will look at the poll tax riots and media’s coverage in the months following it. In the short term, the press reported the movement as simply a few vandals leading a crowd too far, but years later, history has written the poll tax riots as a united and successful class war that signalled the end of Margaret Thatcher’s tenure.

Maybe the same institutions are once again taking a while to catch up with what is becoming one of the most viral and dynamic movements in our recent history.

What is for sure is that however pretty, it is not Charlie Gilmour’s face that the students will feel representative of them and their cause, it is the face of Alfie Meadows. 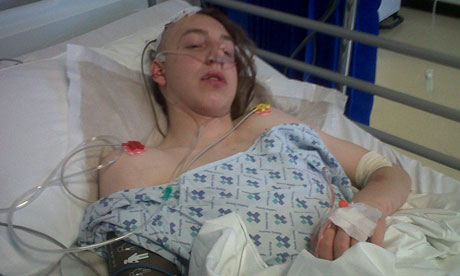 Student protester operated on after being ‘hit with police baton’