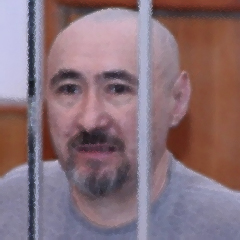 Below is a brief update on issues and events which you/your organisation might take up as part of the ongoing campaign to support workers and social movement activists in Kazakhstan.

1. Berik Zhagiparov is a workers’ leader in Zhezkazgan . I met him there in November last year when I was in Kazakhstan for the congress of the independent trade union, Zhanartu. His ‘crime’ was organising a demonstration of protest against Kazakhmys – a gigantic conglomerate employing 50,000 workers. It mines and processes metal and trades on the London Metal Exchange. Our Campaign organised protests, including handing in a large message at the company’s headquarters in London. Unusually, my letter received a response – a very defensive email from an English-speaking representative of Kazakhmys called John Smelt. He claimed that Kazakhmys recognises trade unions. However, it seems that the only trade unions that the company recognises are ones that they can control. The spark that led to Berik’s arrest was probably the fact that the workers themselves had, for the first time, elected their own leader. Kazakhmys’ response was to try and establish a new “stooge” union which would be compliant. It would be helpful if supporters could continue to e-mail the company (via [email protected]) querying which unions the company recognises and requesting that unions other than those that agree with management be allowed to organise.

2. Vadim Kuramshin, the much-persecuted human rights lawyer, has had his appeal against a 12 year prison sentence rejected. Vadim’s ‘crime’ is to be a lawyer defending the rights of workers and prisoners and attempting to expose bribery and corruption by the authorities. The court that upheld the 12 year sentence behaved in a way totally reminiscent of the old Stalinist courts. This is a complete travesty of justice. Vadim was held and tried over a seven month period last year. In August, despite being put under huge pressure by the police and the regime, the jury found Vadim innocent of all but one minor crime, for which he was given a one year conditional sentence and released. He was then arrested again in December after the prosecutor appealed against the sentence. The new sentence of 12 years was handed down in one day, and has now been confirmed by the appeal judge. So determined is the Nazarbayev regime to avoid any repercussions from governments in the west that an independent OSCE observer due to attend Vadim’s appeal proceedings was taken off her plane in Uzbekistan, obviously under orders from the neighbouring state. It is vitally important that protests continue to be sent to demand the release of Vadim Kuramshin and the dropping of all charges against him. 1: Embassies of Kazakhstan in your country – a list of Kazakh embassies and consulates can be found here http://www.embassypages.com/kazakhstan 2: Ministry of Foreign Affairs Republic of Kazakhstan 010000 Kazakhstan, Astana, D Kunayev s tap 31 Tel: +7 7172 720111 Fax +7 7172 720110 Email [email protected]

3. Aron Atabek, the renowned Kazakh poet, who was given an 18 year prison sentence for trying to defend the shanty town of Shanyrak against the bull-dozers, remains in jail. He recently ‘celebrated’ his 60th birthday in detention and has been moved on to a special, solitary confinement regime. The authorities have tried to break the spirit of this inspirational activist but have not succeeded. He is allowed to receive letters and the authorities should be reminded of the widespread indignation of his supporters around the world by: 1) Letters being regularly sent to him at: Uch. UK-161/12, posyolok Severnyi, Arqalyq, zip:110300, Kostanayskaya oblast, Kazakhstan 2) Protests being sent to your local embassies/consulates condemning Aron’s further detention – demanding his release and the dropping of all charges against him. Also included in the demands for freedom should be the three other activists arrested with Aron:- Erganat Taranshiev, Kurmangazi Utyegenov and Rustem Tyakov. (Please send copies of your messages to www.campaignkazakhstan.org so that we can publicise on the web-site the amount of support/protests being expressed. 4) Contact your local office of PEN International – the organisation that campaigns on behalf of imprisoned writers – about Aron’s case. You can find their address on the internet via: http://www.pen-international.org  Please keep checking the website for more detail on these and other developments in Kazakhstan. Please also continue to send in protests when needed. They do have an impact on the Kazakhstan authorities and they raise the spirits of activists in Kazakhstan. We also appeal to you to make donations and raise funds for the campaign. Campaign Kazakhstan was set up in Brussels by Paul Murphy, Euro MP for Dublin. In the UK we have been successful in getting the support of a growing layer of trade unions and individuals. We will be holding a General Meeting to formally elect a steering committee on 7 April. All affiliated individuals and organisations are invited to participate.