Chinese Leader In Hospital Having Cameron’s Tongue Removed From Arse 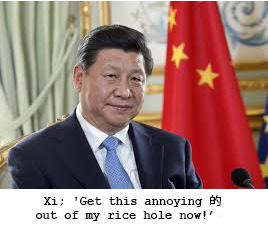 Chinese leader Xi Jinping has been rushed to a private hospital in Kensington to have David Cameron’s tongue surgically removed from his arse. Problems started on the first day of the Chinese premiere’s official UK visit when he began to experience difficulty sitting down and breaking wind due to the close proximity of the PM. Now after six days of intensive diplomacy, otherwise known as constant bumhole licking, Cameron’s tongue has finally become stuck to his sphincter.

Speaking from underneath the Chinese No.1 Cameron breathlessly mumbled, “I was just doing my best for UK business. My team and I decided early on this was best position to adopt in our negotiations with China and is, in fact, a mirror image of our own country’s relationship with their mighty economy. I know I have been criticised for being servile to a state with such a history of appalling human right abuses but on the plus side I have won a dodgy nuclear reactor and two free karaoke CD’s off Mr Jinping’s wife. UK citizens must remember that the days of Tienanmen Square are far behind us because nowadays the Chinese have much, much, MUCH more money. Money that my friends and I are determined to get our hands on… so, of course, we can share it with you.”

Speaking from his hospital bed Mr Jinping anxiously shouted, “Get this annoying little  妈的 out of my rice hole now! Or we’ll invade Surrey like we did with Tibet.”

Royal kisses on the cheeks of a flatulent superpower …

2 days ago – I saw the Queen’s eyes, as she licked the massive Chinese arse, meeting Jeremy … Some – David Cameron, Mark Carney, and the Duchess of  …

View all posts by Ethan →
This entry was posted on 29 October, 2015 in homepage and tagged current affairs, Ethan Harrison, politics, satire, Social Comment. Bookmark the permalink.