Jazz happens in real time, once. 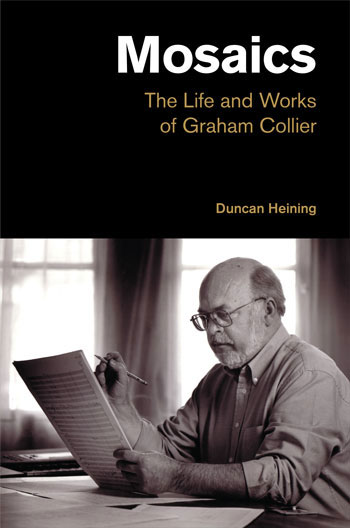 Graham Collier believed that ‘jazz happens in real time once’, and this coloured his music, his books, and his teaching practice. It is important that there is a book about him as I fear that he is at risk of becoming a little-known member of a little-known wave of UK jazz musicians, or, worse, a lost member of a slightly lost generation. The previous wave, people like Ronnie Scott, Stan Tracey and Tubby Hayes, were fine players but much more in thrall to the then current US bebop models (& their compositions, though Tracey developed into a fine composer of short pieces). There were outriders like Joe Harriott but he, like Collier, was an outsider in many ways. Essentially it was Collier & his generation (Mike Westbrook, Michael Garrick, Mike Gibbs, and others) who, whilst still influenced by the best US models of composition / direction (Duke Ellington, Charles Mingus, Gil Evans, Miles Davis) began to forge a distinctive music of their own. This paved the way for the following wave of, often, free improvisers like Evan Parker and John Stevens, who became very well known within jazz circles, worldwide, and remain at the forefront in their idiom. Put simply, Collier felt that, post Ornette Coleman and Miles Davis’s Kind of Blue, it was no longer necessary for every piece to follow bebop structures and have soloes by rote. He admired jazz musicians across the spectrum, but believed that the music had to move onwards – retaining what Whitney Balliett called ‘the sound of surprise’, through improvisation and compositional devices, so that every performance was different and happened ‘in real time, once’.

Mosaics does a good job in showing how, in his various spheres of activity. Collier was an outsider: a working-class gay man, a jazz composer, a writer (polemicist?) on the subject, and the man who introduced jazz tuition into the Royal Academy of Music.

It also does well describing the music for the neophyte as well as the scholar, and putting it in context, locating Collier in the jazz continuum (the name of Collier’s website), and the jazz education wars. Where I differ somewhat from Heining’s assessment is that I am more well-disposed to Collier’s work with texts, especially his epic The Day of the Dead, with readings from Malcolm Lowry (who Heining admits to not liking). I think, taken with the other Lowry influenced works (notably Symphony of Scorpions) it is a considerable achievement. A portion of both records can be heard on Relook, a double CD posthumous selection of Collier’s work, curated by his partner John Gill. Listening to the pieces and excerpts here will help direct the newcomer to individual records of interest. I’m biased, and this suggestion saves me having to list favourites.

It is always difficult reading about someone you knew. And, perhaps inevitably, there are aspects of the man that don’t seem to be captured here. Part of this may be due to the fact, which Heining acknowledges as a difficulty, that Collier’s partner John Gill died during the writing of the book. Tragic in itself, this also cut Heining off from a key resource

I would have liked more on Collier’s attitude to criticism of his bass playing. Heining just gives a footnote that says Collier was aware of this and refers us to an ancient interview that doesn’t seem to be accessible online. His response to criticism of his writing – both musical and his books – is covered in detail. It would have been interesting to know how this (too?) sensitive man felt. He gave up bass playing in the 70s, and from then on would stalk the stage in front of his ensemble who, whilst equipped with some basic notation, would respond to a series of hand gestures he had taught them. These could mean anything from ‘solo now’ to ‘remember what you just played for later use’. In this way he conducted a very different performance of a piece in each performance. The CD Directing 14 Jackson Pollocks is a fascinating example of all this, as it also includes live versions of his pieces that predate this method, as well as the scintillating late composition ‘The Vonetta Factor’.

In many ways, though, this is a sad book. Like Duke Ellington and Mingus, Collier composed with individual players in mind. His methodology could put them in challenging, outside of their comfort zone, situations – the same could be said for his students – but this was apt to bring out the best in them. On the whole, though, they seemed to prefer either Stan Tracey or the music of Mike Gibbs, Kenny Wheeler and Ian Carr. Collier didn’t dislike these composers, but when one of them won the composer poll in a jazz magazine he said to me ‘fine – but he writes tunes, for (expletive’s) sake’. Graham, like Mingus, Butch Morris, Anthony Braxton, George E. Lewis and others, did so much more than that. Heining does suggest that this practice of putting musicians in challenging settings may be why they don’t rate Collier’s music, and their contribution to it, higher. I think he pushed them into excelling. Saxophonist Art Themen, for example, prefers his work with Stan Tracey, but I’ve never heard him play better than with Collier on Symphony of the Scorpions.

Students were expected to compose and record, rather than just learn bebop licks (become ‘bebop clones’ as one appreciative student puts it) and some found this too much for their level of experience, but most now seem to feel that this emphasis on their creativity and development was of considerable benefit. They learnt to record their music, play without routines, and to react quickly (pivot, as we’re talking UK jazz, on a penny) as well as learn about jazz history and various musical offshoots. One other criticism levelled at his teaching was that he ‘bigged up’ his own work, but when I gave a one-off lecture on Jazz & Literature to the class of ’92, I assumed that he had told them about his own work in this sphere. He hadn’t, so I did. He brought interesting, big name lectures into the Academy for concerts and workshops, including Anthony Braxton and Dave Holland.

GC’s final book, The Jazz Composer, is discussed in some detail, and is as good an introduction to the subject, and the teaching of the subject, as you’ll find. Heining would like a more coherent political theory of improvisation and jazz in general to emerge. I feel that this is implicit and may not have been within the remit of the book. The anecdotal bits of the book are funny and pertinent, sometimes poignant, and perhaps, had Collier lived, these might have formed the basis of an autobiography (he hinted at this to me, once) and we might have gleaned more about politics, growing up gay in the 50s, etc. Arguments that it isn’t comprehensive are valid, but you can’t mention everyone, and Collier did pick up on some omissions, such as Henry Threadgill, in subsequent web entries. It was at a Threadgill concert that I met him. If you read Mosaics and The Jazz Composer, and listen to Relook and the recordings that compilation steers you towards, you will have a pretty clear idea of the man and his music, and derive a lot of pleasure in the process.

Collier is quoted as describing ‘a dissatisfaction with the passivity of much jazz, where nothing happens that hasn’t happened before a hundred perhaps a thousand times. Why do it? It certainly demeans the word jazz as I understand it.’ Or as the ever pithy Miles Davis said, when confronted with an 80s wave of neo-classicists trying to sound like his work from the 50s and 60s, ‘Didn’t I do it good the first time?’ and ‘isn’t that what records are all about?’

Since I’ve mentioned Miles, he was, of course, a commanding performer with magnetic stage presence. Collier didn’t have that but, in a phrase by a ‘friend of a friend’ (which he used as the title of a CD), standing in front of his musicians and making hand gestures, he gave the impression of ‘directing 14 Jackson Pollocks’ – and when he did that, a brilliant and unique form of jazz happened ‘in real time, once’.

Tweet
This entry was posted on 21 May, 2022 in homepage and tagged Duncan Heining, Mosaics: The Life and Works of Graham Collier, Stephen C. Middleton. Bookmark the permalink.